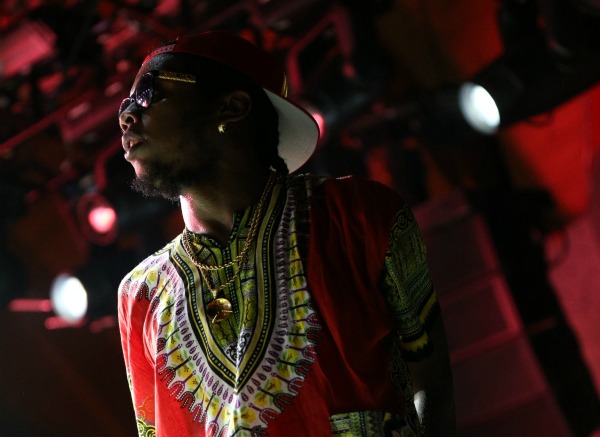 Trinidad James / Photo by Jeffrey “JBD” DennisTrinidad James burst onto the music scene sporting mounds of gold jewelry, an open-leopard-shirt-and-slippers ensemble, and a bandana emblazoned with his native flag of Trindad & Tobago tied firmly around his afro in his music video for his debut single, “All Gold Everything”.

That snazzy combination makes it easy to believe James – born Nicholas Williams – when he reveals that his guilty pleasure is fashion.

It’s James’ next revelation that, considering his affinity for high fashion, is a bit of a head scratcher.

“I was a pretty good high school basketball player,” James said. “People don’t know that, but I played in high school at South Atlanta (Atlanta).”

I caught up with James, one of hip hop’s fastest rising stars, to chat about everything from his deadly jump shot to his best fortune cookie message to why he’s not embarrassed by any of the random songs in his iPod.

Jason Jordan: Tell me more about your balling skills.

Trinidad James: I was a point guard, shooting guard. Yeah I was a pretty good player, I’d say.

JJ: What was your shining moment?

TJ: Well, I don’t remember one particular best game I just remember playing. Life isn’t really about moments for me; I just like basketball, ya know.

JJ: Gotcha. What kind of game do you have?

TJ: I’m more of a shooter; off picks, running around a lot getting open shots, fast break threes… That type of thing. I still play now.

JJ: The college basketball season is pretty much here so who’s your team?

JJ: Is that where you would’ve signed out of high school given the opportunity?

TJ: I don’t know man… Hmm, I don’t think I would’ve gone there, but that’s still my team. I probably would’ve went somewhere in Florida; maybe Miami or something.

JJ: Do you follow high school basketball in Georgia?

TJ: To a certain extent. I can’t as much now because I’m usually pretty busy, but, yeah, I’m still in to it.

JJ: Michael Jordan recently said, in his prime, he was sure he could beat every current NBA star, but he wasn’t sure about Kobe Bryant. Who would you take in that matchup?

JJ: Your single “All Gold Everything” was definitely a banger, but I’ve gotta ask: What’s with the obsession with gold?

TJ: (Laughs) Well, I don’t think I have an obsession with it or anything like that. I just like gold jewelry. I’m from the Caribbean and gold is a heavy part of the Trinidadian culture.

JJ: Makes sense. What’s the most random thing you have in gold?

TJ: Well, I don’t have like a gold toilet stool or anything like that; I just have the basic pieces. I just have gold chains, gold teeth, gold watch… Just the regular stuff.

JJ: Both in their prime; who wins a heavyweight bout between Mike Tyson and Muhammad Ali?

TJ: Uuuuh, whoever really wants it that day. Either one can win it. If Tyson isn’t focused, Ali will beat him and vice versa. What Tyson doesn’t do well, Ali does and what Ali doesn’t do well, Tyson does. It’s power versus wisdom and power.

JJ: What is the most random song that you know every word to?

JJ: What’s the most embarrassing song on your iPod?

TJ: Well, I don’t think I have any real embarrassing songs. It’s all about when you play songs. Like you’ve gotta know not to play Keyshia Cole if you’re with your homeboys looking at the football game. But if you’ve got a girl over and you’re trying to impress her then Keyshia Cole is needed for your listening pleasure. It’s all about knowing when to play certain songs at the right time. Nothing’s really embarrassing if you ask me.

JJ: So I shouldn’t feel bad that I’ve got a little N’SYNC on my iPod, right?

TJ: Not at all; you’ve just gotta know when to play that and who to play it around.

TJ: Basketball or the movies.

JJ: Blindfolded could you tell the difference between Sprite and Sierra Mist?

TJ: iPhone 5s. The slowmo camera makes it well worth the buy, in my personal opinion.

TJ: To be myself.

TJ: They, honestly, go back and forth. I love both.

JJ: What would people be shocked to know about you?

TJ: That I’m really just a normal person. I know people hear that all the time, but it’s true with me. I’m a normal human being.

JJ: Who would you not want to meet in a dark alley?

JJ: What’s the best way to deal with a hater?

JJ: What can we look for music-wise from you coming up?

https://usatodayhss.com/2013/chop-up-trinidad-james
Chop-Up: Trinidad James
I found this story on USA TODAY High School Sports and wanted to share it with you: %link% For more high school stories, stats and videos, visit http://usatodayhss.com.