The Vermont Sports Media Association has chosen seniors from Stowe High School, Colchester High School and Wellesley College as its athletes of the month for October.

Each was nominated by a VSMA member for his or her outstanding efforts in the month of October.

McGovern dominated in both her sports in October. She won the Division III girls cross country title with a time of 21:18, a day after she helped the Stowe field hockey team win its D-III quarterfinal by scoring a goal and adding an assist. McGovern then contributed an assist in a semifinal win over North Country; the team won the D-III title in November.

Goudie, a prolific striker, scored five goals in three October playoff games to lead No. 2 Colchester to the D-I final. Those scores included the overtime game-winner in the Lakers’ semifinal victory over No. 3 Hartford. The Metro Conference’s leading goal scorer, Goudie tallied 10 goals in all during October for the Lakers, who went on to win the D-I title in early November.

Kirkaldy is a co-captain and defender for the Wellesley field hockey team. Wellesley went 7-2 in October, while allowing eight goals and posting four shutouts, and ended the month as the NEWMAC regular season champion at 8-0. The team finished 18-4 and reached the NCAA D-III Elite Eight. Kirkaldy made two defensive saves in a 3-2 win at Springfield. 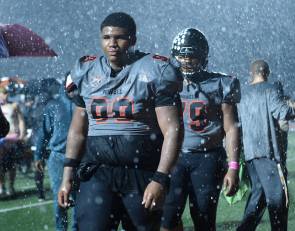 https://usatodayhss.com/2013/goudie-mcgovern-kirkaldy-honored-with-vsma-awards
Goudie, McGovern, Kirkaldy honored with VSMA awards
I found this story on USA TODAY High School Sports and wanted to share it with you: %link% For more high school stories, stats and videos, visit http://usatodayhss.com.