USA TODAY High School Sports, in conjunction with Scoopshot, is launching a photography series in which anyone can see their work published here. Scoopshooters will be asked to send entertaining, high school sport-related tasks and we’ll feature the photo each week that we think best completed the task.

Scoopshot is an application with which a photo task is sent to a target area and Scoopshooters in that area with the application on their phone respond to the task by snapping the photos to meet the task. Those photos are gathered into a gallery, and can be purchased. You can download the application on your smartphone.

There were some fantastic “School Spirit” submissions. It was very hard to narrow down the selections this week. The winners were chosen for the clarity of the photography, visual engagement, and best capturing the emotion of the moment.

However, there were two other shots this week that were purchased as well. The first comes from the Riverside Poly High School Bears. Check out the beautiful sky in this photo as every player intently stares to the field and to the coming season. This photo comes to us from Melissa Kromas of Riverside, CA. 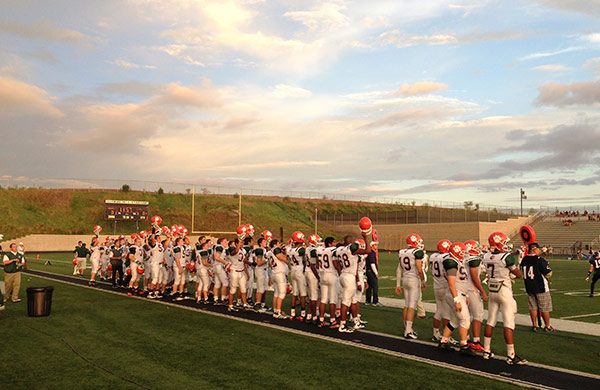 Finally, our third selected photo comes from Shaler, PA. Jeff Walzer sends us this photo of two Shaler Cheerleaders, taking a second from watching the game to be part of this photo moment. Shaler Cheerleading has some strong credentials, the Shaler Area Varsity Competitive Squad won the Small Varsity Division of the High School Worlds held in Orlando in February of 2013. They competed against teams from Canada, Equador, China and the United States. Western Pennsylvania has a strong history of High School Football, and it’s not easy to make these squads. So, here’s a shout out to Shaler Cheer.

Check out the rest of the submissions below:

We’ll feature at least shot each week, so, grab your mobile phones and get ready for the next Scoopshot task.