USA TODAY High School Sports, in conjunction with Scoopshot, launched a photography series in which anyone could see their work published here. Scoopshooters were asked to send entertaining, high school sport-related photos that addressed each week’s Scoopshot task and we featured the photos each week that we thought best completed the task. Click any photo to view all the submissions to this Scoopshot task.

This week, we asked for shots of the youngest or oldest fans.

Our feature shot comes from Amanda Schwarzer of Temecula, CA. A young fan receives hug from Great Oak High School wolf mascot at Friday nights victory over Heritage. Amanda has a sharp eye or a good phone or both. This is a fantastic shot and available in the gallery below. The Great Oak Wolfpack brought their record to 2-1 with a stunning comeback 43-40 victory over Heritage. 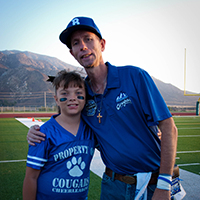 Our next shot features, according to the photographer, Jessica Woodward, “Cayla Woodward (8 yrs) and Stevie Smith sporting Cougar spirit. Cayla has been a fan since she was 3 and Stevie was the schools water boy since his dad coached in the 60’s. He has attended every home and away game since. He no longer is the water boy but an honorary member of the team! This was taken at the Beaumont Vs Banning ‘Battle of the Wheel’ game!”

The Battle of the Wheel is the oldest rivalry in Riverside County, CA and has been heating up for almost seven decades. Beaumont lost to Banning by a score of 20-10 this year. Banning holds a slight overall lead in victories as this rivalry nears 70 years old. If you think that “The Battle of the Wheel” should be included in this year’s USA TODAY High School Sports Best Rivalry contest, let us know in the comments.

Last year’s best rivalry winner, “The Bell Game” featured Brookfield vs Marceline in Missouri in a rivalry that’s been going on for over a century, and they’ve been passing the bell since the 1930s.

Thank you for sharing your photos of the next generation of fans, and for the respect for the alumni who are still out there cheering.

Congratulations to our Scoopshooters of the Week!

Check out the rest of the submissions below:

We’ll feature at least shot each week, so, grab your mobile phones and get ready for the next Scoopshot task.