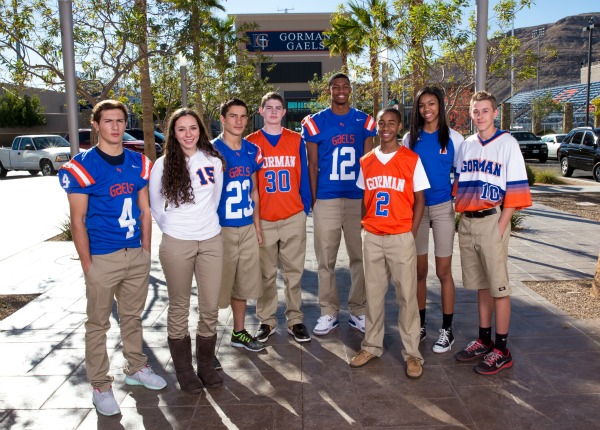 They are just two of the many athletes with ties to celebrities who attend Gorman, a Catholic school of 1,350 students in grades 9-12.

Cunningham, the son of former NFL star Randall Cunningham Sr., is a 6-5, 185-pound senior quarterback who has thrown for 1,321 yards and 12 touchdowns, while running for 941 yards and six touchdowns. He also is a brilliant high jumper who led the nation last year with a leap of 7-3 ¼.

Fertitta, a 5-8, 171-pound junior safety, is the son of Lorenzo Fertitta, who owns the Ultimate Fighting Championship (UFC) and other sports enterprises. He has made 29 solo and nine assisted tackles. Coach Tony Sanchez calls him “an extremely hard hitter with a high football IQ.”

Even the coaching staff has a celebrity, former NFL player Cedric Tillman.

Leading the freshman football team to a 9-0 record this year was a star of the future, Biaggio Ali-Walsh, the grandson of boxing superstar Muhammad Ali. The 5-9, 170-pounder scored over 30 touchdowns and gained nearly 2,000 yards, according to coach Bob Burgman.

Cunningham has a sister, Vashti, a 6-foot sophomore, who was the No. 4 high jumper in the nation as a freshman at 6-0 ¼. She also is a standout volleyball player. UCLA and Texas are two colleges who already have her on their radar. She can touch 10 feet, two inches and her vertical jump is close to 30 inches.

The boys basketball team has two sophomore guards who are linked to famous fathers. Julian Payton (5-9, 130), son of NBA All-Star Gary Payton, was named MVP after leading the frosh team with averages of 15 points, eight assists and three steals. Travis Rice (6-1), who averaged 12 points, is the son of UNLV coach Dave Rice and the nephew of Gorman coach Grant Rice.

On the baseball field, check out junior right-handed pitcher Chase Maddux (5-10, 120), who compiled a 7-1 record on the JV team last year. The son of former Major League star Greg Maddux , he has three pitches with great location and his famous father says he was about the same size at a similar age.

Gorman coach Nick Day loves to pick Greg Maddux’s brain at every opportunity and calls him “the Peyton Manning of baseball.”

The USA Under-19 National football team will play Team Canada on Feb. 7, 2014, at the University of Texas at Arlington. They have split their first two meetings.

The U.S. Junior Select hockey team defeated Russia 4-1 to win the World Junior A Challenge in Yarmouth, Nova Scotia. Nick Schmaltz, a senior who currently is living in Green Bay, Wis., was named MVP after scoring a record 12 points and tying the record with eight assists in four games. Connor Hurley, a senior at Mona Shores (Muskegon, Mich.) had seven assists.

*The U.S. National Under-17 Team defeated Russia 5-3 to win the Four Nations Tournament in Prievidza, Slovakia for the fifth straight year. Luke Kunin of Chesterfield (Mo.) led the way with two goals and one assist.

*The U.S. National Under-18 Team defeated Switzerland 6-2 to place second during the Four Nations Tournament in Turku, Finland. Alex Tuch of Baldwinsville N.Y., notched two goals and one assist.

Sensational junior Caeleb Dressel of Clay (Green Cove Springs, Fla.) set a national record in the 50-yard freestyle during the Class 2A state meet by leading off the 200-yard freestyle relay with a brilliant leg in 19.29 seconds. He held the previous record of 19.36.

However, he lost his national record in the 100-yard butterfly when University of Texas recruit Joe Schooling of Bolles (Jacksonville) was clocked in 45.52 seconds during the 1A state meet. Dressel’s record had been 45.89.

Sydney Chandler set a national volleyball record this year with 6,414 assists during her outstanding four-year career at Bayside Academy (Daphne, Ala.), which won its 12th consecutive Class 3A state title. The 5-6 Chandler, who carries a 3.98 GPA, is nicknamed “Sizzle” for her dynamite serves.

Alana Hadley (age 16) is the youngest Olympic marathon trials qualifier since 1984. A junior at Audrey Kell (Charlotte, N.C.), she earned her berth by placing fourth during the Indianapolis Monumental Marathon with a time of 2:41:46.

https://usatodayhss.com/2013/the-victory-count-3
The Victory Count
I found this story on USA TODAY High School Sports and wanted to share it with you: %link% For more high school stories, stats and videos, visit http://usatodayhss.com.