Everything is just a little different in the Lone Star State and that includes high school football. The game is much more than a sport here – it’s a culture. Here are a few reasons why…

1. Did you think huge scoreboards were reserved for professional sports? Think again! In Texas, high school stadiums come equipped with high-definition “jumbotrons” to match the jumbo-sized pride that runs through the veins of Texans.

2. Speaking of stadiums, Texas is home to some of the largest – if not the largest – high school football stadiums in the U.S. Both historical and gigantic, San Antonio’s newly renovated Alamo Stadium seats 23,000 fans. Further north in Allen, you’ll find the infamous $60 million Eagle Stadium, which took two years to build.

Alamo Stadium during its first season since undergoing renovation.

3. Football is such a big deal in small town Decatur that Halloween was moved up by a day because it interfered with the final home game of the season. It’s THAT serious.

4. The entire population of small towns can be found cheering at the stadium on any given fall Friday night.

6. Mum is the word. Not only are homecoming mums a Texas-based tradition, no other place has them this big.

Mum is the word.

7. Texas high school football players are passionate about their sport and are not shy to show it. Take Apollos Hester of East View High School, for example, whose postgame interview with TWC News Austin’s Lauren Mickler became a motivational speech that gained nationwide attention.

8. Tiny Texans get a head start. Programs like the Texas Youth Football and Cheer Association are aimed at stimulating interest in the sport early in boys and girls, ages 4 to 12.

Tiny Texans get a head start.

9. Although Texas is known for its temperamental weather, fans pack stadiums to cheer on their teams rain or shine, in the scorching heat or blistering wind.

11. High school football pride does not just revolve around the pigskin – it includes the band, too. For 76 years in San Antonio, high school marching bands have had their own chance to duel on the field during the Battle of the Flowers Band Festival, as part of the city’s Fiesta celebration. To conclude the show, 3,000 musicians from the competing schools perform on the field for a Texas-sized finale.

Battle of the Bands finale 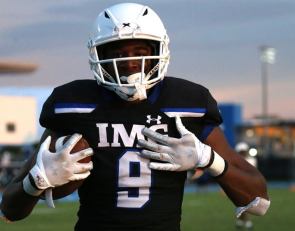 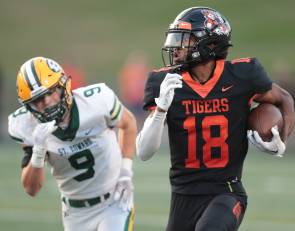 https://usatodayhss.com/2014/11-reasons-texas-is-the-high-school-football-capital-of-the-world
11 reasons Texas is the high school football capital of the world
I found this story on USA TODAY High School Sports and wanted to share it with you: %link% For more high school stories, stats and videos, visit http://usatodayhss.com.