Pine Creek defeats Longmont to repeat as 4A state champions

Pine Creek defeats Longmont to repeat as 4A state champions

DENVER – Pine Creek made quite the statement when it steamrolled over Longmont in the Class 4A football state championship game on Saturday, Nov. 29, 2014 at Sports Authority Field at Mile High.  But from the very beginning, it appeared the No. 1-seeded Eagles already had a second consecutive state title in the bag.

The No. 7-seeded Trojans struggled offensively, totaling 44-yards in the first half, and only getting three first downs.  Longmont started the game off with a pretty ugly snap that QB Clint Sigg couldn’t hold on to.  And so, the Trojans lost 18-yards for the early mistake, and were forced to punt to Pine Creek – the first of five first-half punts. Sigg threw two interceptions as well in the first half.

Pine Creek’s first half went a little differently.  JoJo Domann attempted a 44-yard FG, only for the extremely low kick to be blocked and recovered by the Trojans. Domann redeemed the blocked kick though with a 32-yard FG, putting Pine Creek on the board 3-0 over Longmont with less than three minutes remaining in the first quarter.

Eagles QB Tommy Lazzaro ran in the first touchdown of the game from 8-yards out.  Domann’s extra point was good, and at the end of the first quarter, Pine Creek led Longmont 10-0.

This was also the game of many penalties.  At one point in the first quarter, Pine Creek had three back-to-back penalties called. Early in the second quarter, Longmont got in on the flag action as well. The Trojans were called for back-to-back false starts, adding to the list of racked up penalties by both squads.

Things started getting a little out of hand when Pine Creek’s Josh Odom ran 28-yards for another Eagles TD.  With the extra point, Pine Creek led Longmont 17-0 with less than ten minutes left in the first half.  Pine Creek quickly got the ball back when defensive lineman Josh Klyn intercepted a Clint Sigg pass.

There was hope for Longmont when Pine Creek’s Tommy Lazzaro threw a pass straight to Eli Sullivan, and Sullivan picked off the pass intended for an Eagle teammate. But then Longmont fumbled the ball right back, and Domann was there to recover. Domann scored a TD on an 18-yard fumble recovery.

At the half, Pine Creek led Longmont 31-0. After two quarters of play, Josh Odom had 152 rushing yards and one TD, and the Pine Creek offense had 324 yards; compared to the 44-yards of offense the Trojans had. It certainly didn’t look pretty going into the second half.

Longmont had a score tease when Conlan Berger appeared to run a TD, but turned out to have stepped out of bounds – a serious bummer for the scoreless Trojans.

Odom ran for 46-yards, only to set himself up for a 2-yard TD run and lift Pine Creek to a dominant 38-0 score over Longmont. Travis Meachum’s 19-yard pick 6 is also the reason the Eagles led the Trojans 45-0 with three minutes left in the third quarter.

But then, something magical did happen with thirteen seconds left in the third quarter: Longmont’s Conlan Berger ran 37-yards down the sideline, this time inbounds, to give the Trojans the first TD of the day.  Unfortunately, the extra point attempt was blocked, and Longmont still trailed 45-6 at the end of the third quarter.

There was some more hope for the Trojans when Clint Sigg floated a beautiful pass straight to Eli Sullivan in the end zone, but Sullivan dropped the ball. Longmont could have used that TD, but it’s okay, because Conlan Berger scored his second TD for the Trojans.  Unfortunately, the game was just about over, with less than five minutes remaining.

Longmont’s late TDs just couldn’t help the team overcome the 45 points scored by the Eagles in the first three quarters of the game.  Although Longmont did have a nice, little comeback in the end, Pine Creek won the 4A state title with a final score of 45-20.

Even though Longmont didn’t have a whole lot of offense until the fourth quarter, the Trojans did a tremendous job making it to the first state title appearance since 1991.  Longmont started out the season rough at 1-3, but made an impressive comeback in the season to finish 10-4 – something that should not be overlooked. Longmont made strides to make a big return at the end of the game, and maybe could have, had there been just a little more time.

Josh Odom had a stand out game for the Eagles, finishing with 284 rush yards on 20 carries and two TDs.  Tommy Lazzaro rushed for 109 yards on 15 carries with one TD.  Conlan Berger rushed for 80 yards and scored the only two TDs for Longmont. 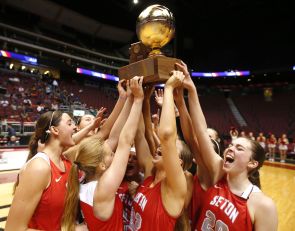 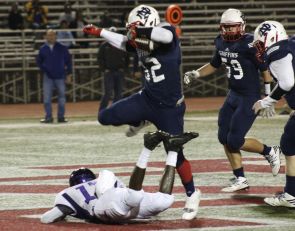 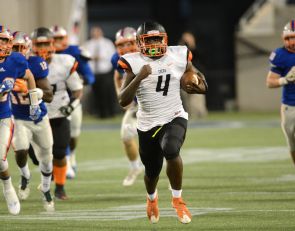 https://usatodayhss.com/2014/4a-championship-pine-creek-leads-longmont-31-0-at-half
Pine Creek defeats Longmont to repeat as 4A state champions
I found this story on USA TODAY High School Sports and wanted to share it with you: %link% For more high school stories, stats and videos, visit http://usatodayhss.com.