An emblem for peace

An emblem for peace

Memuna Mansaray McShane twirled her finger around a thin silver chain hanging from her neck, a heart-shaped pendant displaying a photo of her deceased biological parents.

“I never got to mourn my parents,” she said.

She is a half a world away from what remains of her biological family, making the most of her second chance in life as a soccer star and senior-to-be at St. Andrew’s Episcopal School in Potomac, Md.

But Memuna uses Facebook to stay in touch with her three older brothers, all of whom live on the West Coast of Africa in Sierra Leone. She was separated as a toddler when she was sent to a refugee camp.

Memuna was born in September 1996 in Sierra Leone, amid a brutal civil war. She was just 2 years old when her mother died – too young to remember the pain when bullets grazed her right arm as her grandmother protectively cradled her inside a mosque. 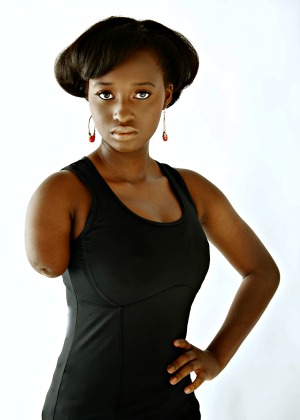 Memuna McShane. / Katie HartHer father reportedly fled to a different part of the country when rebels attacked the capital of Freetown. Memuna’s mother and grandmother sought shelter with her and her three older brothers in the mosque.

According to news reports, militia entered the mosque, shooting and killing Memuna’s grandmother. Her mother was also shot and died. Memuna’s older brother, who was 11 years old at the time, carried Memuna to a hospital, and doctors were forced to amputate her right arm.

She was later sent to a refugee camp with other children suffering from amputations. While there, the president requested one of his aides to randomly select an amputated child. Memuma was chosen, and the president brought her to rallies – and because of that she became an emblem for peace.

Memuna thinks about her past in small doses.

“It’s a lot to take it. I analyze it deeply,” she said. “It makes me sad, but I don’t feel like my childhood was lost. I don’t remember anything. I feel more grounded now that I know about my past.”

Less than a year later, the Rotary Club in Staten Island sponsored Memuna and seven other amputated refugees in Sierra Leone to come to the United States for medical care.

“It was very painful,” Memuna said. “I cried every time I went to the doctor or dentist.”

Memuna was living in foster care in New York when Kevin and Kelly McShane learned that the sponsored Sierra Leonean children were in need of adoptive parents. The McShane’s had two biological children already, Molly and Michael, but were open to adopting partly because of Kelly’s close connection with Sierra Leone. She was a Peace Corps volunteer in Sierra Leone for two years before the civil war.

The McShane’s met Memuna a few days after Thanksgiving in 2002. Memuna cried the moment she saw Kevin and Kelly. She wasn’t interested in meeting them because she was content with her foster family at the time.

But Memuna quickly warmed to Kevin and Kelly after they told her she didn’t have to refer to either as “mom” or “dad”. Memuna moved in the following month, and the McShane’s adopted her in 2003.

Kevin, a soccer coach, immediately introduced the game, and Memuna often played with her brother, Michael, in the family’s basement. When she started playing organized soccer, Kelly recalled Memuna was fast, aggressive and dribbled through players with ease – abilities she continues to exude at St. Andrew’s.

St. Andrew’s soccer coach Glenn Whitman had never coached an athlete with an amputated arm until he met Memuna as a freshman. He wasn’t aware of her background, nor did he bother to ask.

Whitman instead took notice of her quick feet, ability to see the field and abundant energy. She proved she was as good as any other player on the team.

“She maintained possession of the ball in ways that were astounding,” Whitman recalled.

That Memuna has one arm and doesn’t wear a prosthetic is no matter of concern.

“It doesn’t stop her from doing anything that she wants to do,” said Kelly McShane, Memuna’s adoptive mother.

Memuna has worn the same silver shin guards since she started playing soccer at age six. Kevin once attempted to throw them away, but she took them out of the trash.

The shin guards are symbolic – they represent her dedication to the game and have been with her throughout her development into one of the top players on her high school team.

“I love them. They fit perfectly,” she said.

The shin guards are the one thing she must wear when she steps onto the field to represent St. Andrew’s. Memuna, a forward, has played varsity for three seasons and was second on the team in total points (goals and assists) last fall.

“Memuna is one of the smartest girls on the field,” said Kristen Butler, a recent St. Andrew’s graduate and former team captain. “If someone on the other team attacks, she has the patience to defend properly, steal the ball, then make a quick move to attack. She is so much fun to play with.”

Memuna’s presence permeated beyond her athletic ability. She threaded the team with her encouraging spirit.

“She reminds me what I’m capable of and helps me realize my potential,” Butler said. “She looks for the best in each girl and helps bring out those aspects. She inspired me to give my all. I think every girl on the team could say the same.”

Google “Memuna McShane” and results show images of her dressed in a white short-sleeved jersey and black shorts kicking a soccer ball. There are images of her standing next to teammates.

And then there’s a black and white photo of her as a child sitting on former President Bill Clinton’s lap, alongside Hillary Clinton. Memuna remembered she loved playing with her bracelets.

She searched her own name on the Internet for the first time when she was in middle school. Memuna was surprised when she saw so many photos of herself, one of which includes being held by Madeleine Albright, the former secretary of state, at 3 years old.

Despite living in the public eye as a child, Memuna shied away from discussing her background. She cried when a player called her a “one arm” during her first soccer season. Throughout her youth, she relied on Kevin or Kelly to explain to others why she was missing a limb.

Memuna wore a prosthetic arm for a brief period in elementary school, but couldn’t bear the heavy baggage. She once hid the arm in a friend’s locker in middle school and was delighted when she heard shrieks in the hallway.

Memuna doesn’t laugh on the inside though. She masked her self-consciousness behind long-sleeved shirts and jackets year-round, even on the hottest days of summer. Sunglasses gave license to stare back at people who stared at her.

Last season, Memuna gradually showed up to practices in short-sleeved or sleeveless shirts. She credits her teammates and playing soccer for learning to accept herself and become more outspoken.

She’s not comfortable wearing short-sleeved shirts regularly though. And when she eats at a restaurant, she prefers to sit with her right side toward a wall.

Memuna acknowledges feeling at peace with herself is a continuous process. She opened up about it last fall.

Memuna stood behind a podium, prepared to address the St. Andrew’s student body.

Her adoptive parents, Kelly and Kevin, faculty and staff also gathered in the school’s gymnasium to hear Memuna’s 20-minute speech. She had anticipated Sept. 18, 2013 – the day she chose to publicly reveal her story for the first time.

“I was a victim and a witness. I’m here now as only a witness,” she announced as she wiped tears from her wide, dark brown eyes.

She went on sharing how she grew up – her family dying, living in a refugee camp, moving to different foster homes and eventually being adopted.

Memuna wanted to show others she’s living proof that having one arm hasn’t debilitated her socially, emotionally or athletically. Telling her story was cathartic.

“We all wanted to hear about her experience in her own words,” Whitman said. “How many times can a 17-year-old girl be a role model? It doesn’t happen enough.

“She helps others understand that in the face of adversity, there’s an amazing amount of hope.”

https://usatodayhss.com/2014/an-emblem-for-peace
An emblem for peace
I found this story on USA TODAY High School Sports and wanted to share it with you: %link% For more high school stories, stats and videos, visit http://usatodayhss.com.