One of the most impressive qb prospects may start

Chancellor Johnson of Newnan, Ga., looks like the prototypical pro-style quarterback. He’s 6-5 and 210 pounds, has plenty of zip on the ball and goes through his progressions, even when he’s just doing drills.

But at this point, Johnson isn’t a four-star or five-star recruit. He still has to beat out incumbent Newnan starter Bryant Bailey, who threw for 1,415 yards and 10 touchdowns last season as a junior.

“I had just transferred in (to Newnan) last fall from East Coweta (Sharpsburg), so I didn’t really play as much as I would like,” Johnson said. “I think we did OK as a team, but individually, I think I could have done the job to get us further in the playoffs.”

Johnson was working at Top Gun, trying to improve his mechanics.

“Sometimes I anticipate too much and slide up in the pocket, rather than keep still,” Johnson said. “I’m also working on keeping my knees bent, instead of hyperextending when I throw and keeping a wide base, a good athletic position.”

Johnson also is a pitcher for Newnan and says all the hours of throwing footballs has helped him increase his fastball from 82 mph to the high 80s to low 90s. He has spent his summer between playing travel baseball and football camps and weekly 7 on 7 events with Newnan.

“I would rather have a packed schedule than be sitting around not doing anything,” Johnson said.

His father, Reese Johnson, was a linebacker on ULM’s 1987 team that won the I-AA national championship.

“We know he passes the eye test, but your height will only take you so far,” Reese said.

“One time, we were waiting for a pizza and the guy who shows up is at least 6-9,” Chancellor said. “My dad always says, don’t be the pizza guy.”

James Morgan will be a big deal for Bowling Green

One of the quarterbacks showing pro potential was James Morgan of Ashwaubenon, Wis., who recently committed to Bowling Green. The 6-4, 215-pound senior stood out in the camp with his poise and consistent throws. Listed as 247Sports.com’s No. 13 pro-style quarterback in the 2015 class, he completed 58.4 percent of his passes this past season for 2,540 yards and 26 touchdowns with seven interceptions, leading the Jaguars to a 10-1 record.

The best cornerback in camp was a receiver

DeAngelo Gibbs of Peachtree Ridge (Suwanee, Ga.), known more as a receiver, really enjoyed showing off his skills at defensive back. He jammed one receiver at the line so hard that the next time, all he had to do was feign a hit and the receiver nearly fell down. He also stayed with most of the receivers, step for step during drills.

“I am picking up pointers every time I go to a camp, but I also like to have fun, competing against the best players,” Gibbs said.

The sophomore already has 13 offers, mostly from SEC and ACC schools.

“I don’t have a preferred school at this time,” Gibbs said. “It’s a process and I have to take time out to do that, but eventually I will.”

Two of Gibbs’ uncles, receiver Jake Reed and cornerback Dale Carter, played in the NFL, so the 6-3, 200-pounder is getting some good instruction.

Keep an eye on Binjimin Victor

The Coconut Creek, Fla., junior wide receiver is as difficult to stop as his first name is to spell. At 6-4, he can jump over most defensive backs but also he caught nearly everything thrown to him and ran fairly precise routes. He is one of two really good receivers at Coconut Creek, with the other being sophomore Emmanuel Greene.

The big winner in camp may have been Ohio State

With the Top Gun camp on the outskirts of Columbus, several players took the opportunity to make an extended visit to Ohio State, including Victor and Coconut Creek teammates Malek Young and Trayvon Mullen, and Liberty County (Hinesville, Ga.) cornerback Richard LeCounte. In LeCounte’s case, another reason he may lean toward the Buckeyes is former Liberty County teammate Raekwon McMillan will be a freshman this year at Ohio State. 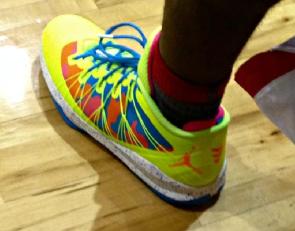 One of the most impressive qb prospects may start