His teammates: Working out in the weight room, watching movies and just hanging out.

McAllister: Making molds of teeth to fit into the mouths of poverty-stricken patients in northern India during his third mission trip in partnership with the Delhi Bible Institute.

The junior catcher, who also is a member of the Delaware Diamonds Showcase team, stepped away from offseason training to work alongside a team ofmedical and dental professionals, and his goodwill is being recognized by USA TODAY High School Sports and the Army National Guard with the Inspiration Award. The honor is presented to 15 student-athletes across the nation going above and beyond to help others.

“It takes a special person to take that on,” Middletown baseball coach Scott Smith said. “Brennan is driven and dedicated. He truly gets a lot out of these missions.”

McAllister described his first mission trip to India with his family in sixth grade as surreal. He marveled at the Taj Mahal, the sight of monkeys hanging from telephone wires and watched an elephant casually walk down the street.But hearing a native Indian man moan as McAllister’s father Brian, a dentist, pulled teeth from his mouth was especially unforgettable.

“It opened my eyes,” McAllister said. “Seeing how grateful [the patient] was and knowing how much my dad helped was meaningful.”

McAllister admired his father’s work, and by the end of the 10-day trip, his mother Cyndy noticed a change in her son. He realized the value in taking care of those in need and was inspired to continue to serve others.

McAllister got the opportunity when he returned to India with his family two years later. This time heprepared dental equipment forhygienists and assisted during patient cleanings. And like his first mission trip, he was just as fascinated and satisfied by volunteering.

“Being there made me realize how lucky I have it in America,” McAllister said.

His urge to give back grew so strong that he elected to complete some of his final exams in advance so he could travel to northern India for a third mission trip this past January.

Most of McAllister’s time was spent alongside a volunteer dentist who taught him how to use a pressure cooker to make dentures and partials for patients. McAllister said the hands-on experience interested him in potentially pursuing dentistry in college. He hopes to volunteer in India again in the near future.

“He has a lot of heart,” Smith said.“I sense his willingness to give back and have a positive influence.”

McAllister will focus his senior project on how the Delhi Bible Institute has impacted his life, and he intends to organize a volleyball tournament to fundraise for the institute.

“Seeing the people be thankful for the work we do brings a smile to my face,” he said. “I feel compelled to give back.” 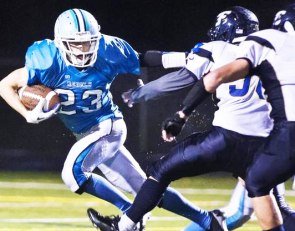 https://usatodayhss.com/2014/mcallister-breaks-the-mold
McAllister breaks the mold
I found this story on USA TODAY High School Sports and wanted to share it with you: %link% For more high school stories, stats and videos, visit http://usatodayhss.com.