The Naples football team scored all the points it would need Friday night in the first half.

The Golden Eagles sprinted out a 17-0 lead against Lely, and then the defense did the rest in a 20-6 victory over the Trojans in the Coconut Bowl at Lely High School.

The Eagle defense pitched a shutout, as the Trojans’ only score came on an interception return for a touchdown. The Golden Eagles improved to 26-15 in this annual event.

Maxwell Joseph ran for 105 yards in 12 carries for Naples (4-1). Michael Walker and Antonio Carbonaro each also gained 40-plus yards on the ground.

“Hats off to Lely, ’cause they played pretty hard,” said Naples coach Bill Kramer. “Hopefully, we’ll build on this game. My goal for next week is to prepare the team better.”

“I’m disappointed in our first half,” said Lely coach Culmer St. Jean. “We had too many mistakes that cost us. The defense did a tremendous job in the second half, ’cause we actually won the second half 6-3. You can’t really fall behind 17-0 and expect to make a comeback.”

After the Trojans failed to get a first down on three tries early in the game, Naples blocked a punt and recovered inside Lely’s 5-yard line. One play later Michael Walker scrambled two yards for a touchdown and put the Golden Eagles ahead 7-0 with 7:15 left in the first.

The Golden Eagles would make it a 17-0 lead when Carbonaro ran it in from five yards out.

Trailing 17-0 at halftime, the Trojans got a spark when Richard Annorat returned an interception 40 yards for a score. So the Trojans were down only 17-6 with only 54 seconds gone in the third. “That was some poor execution on our part on that play,” Kramer said. “We tried out a new formation there. Maybe I outcoached myself a little bit.” 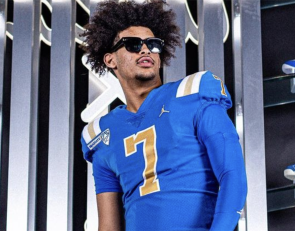 Naples jumps out to quick lead, holds on for Coconut Bowl victory