NEW CASTLE – Kiley Lingenfelter’s coach uses her as his translator. The New Castle senior setter is the child of two volleyball coaches, and her vernacular reflects an immersion in the sport and its terminology.

As she assesses the beginning of her senior season, she takes a cerebral look at the pressure faced by her team’s younger players now thrust into big roles in the lineup. As the interview with a reporter continues, she discusses how she makes sure to diversify her team’s offense, keen on building a rapport with a variety of hitters should she need it later in the season.

So when Trojans coach Mike Dodrill needs to impart a message to his players, he’s confident Lingenfelter will understand. And given that she is their contemporary, he knows she will be able to deliver the message and connect with her teammates in a way he cannot.

As Lingenfelter settles into her senior year at New Castle (she spent her first two high school seasons at Wapahani before transferring to New Castle as a junior), there is a hint of change and uncertainty in her circumstances this season.

She has returned after missing most of her club volleyball season due to offseason knee surgery. She said she feels better than ever after the surgery, but still occasionally walks with a limp out of habit. She has yet to figure out where she will play college volleyball, with some schools having backed off their recruiting after her injury.

And Lingenfelter is also adjusting to playing without Lauryn Gillis. During her first season at New Castle, Lingenfelter was able to set to Gillis, a longtime close friend who has gone to play at the University of Southern California. As a senior, Lingenfelter is setting to an offense without a hitter who attracted such attention.

Lingenfelter said Gillis played a strong leadership role on last season’s team, a void she has worked to help fill this season. And while the loss of Gillis means the loss of a particularly strong hitter, Lingenfelter said she is still comfortable with her primary option this year.

She has a longstanding relationship with fellow senior Payton Anderson, a connection she described as similar to the one she shares with Gillis.

“(Gillis) is great, I can’t take that away from her,” Lingenfelter said. “But Payton and I just have a connection I’ve never had with anyone else. She can hit anything I throw up there. I could set her with my eyes closed, we just have a great connection.”

Lingenfelter said Anderson has shared some of the burden of helping develop the Trojans’ younger players, and Anderson has noticed Lingenfelter’s efforts in that regard. Anderson said a crucial part of Lingenfelter’s approach is a willingness to work with each of her teammates individually to further develop bonds.

While Lingenfelter is clearly comfortable setting to Anderson, she is deadset on getting other players involved. At times, she said she specifically sets to other players in matches with a wide margin simply to build connections with those players for later in the season.

“I really try to get balls to those kids,” Lingenfelter said. “And when we’re in practice, I really try to work on that so it builds their confidence up and it builds my confidence up in them. So I know that if we’re in a tough situation, in a tough game, that I can go to that hitter and not be worried about an error or anything. It helps that they’re getting a lot better, but it’s still kind of a comfort zone thing with Payton, so I’m working on that a lot.”

Lingenfelter talks in a mostly-empty New Castle Fieldhouse following her team’s Tuesday match against Union County. Lingenfelter and her teammates won the match, but she feels her team didn’t always play up to its ability in this particular match. Yet she is steadfast in her belief in her team’s long-term prognosis.

“A lot of the players are really raw,” Lingenfelter said. “They have a lot of potential and they’re really athletic, they just don’t know what they don’t know yet. We have a lot of work to do. But I think we’re going to get there. Because they work so hard, and they really do want to get better. So that’s what helps a lot when I work with them individually and when I work with them as a team, that’s what helps a lot, because they really care.”

Kiley Lingenfelter serves during a 2013 match. Lingenfelter is settling into her senior season at New Castle, her second year at the school. 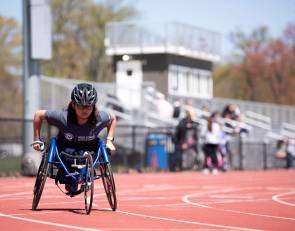 ‘I can do more’: NJ kids with physical disabilities struggle to play, compete

https://usatodayhss.com/2014/new-castle-setter-lingenfelter-adjusts-to-change
New Castle setter Lingenfelter adjusts to change
I found this story on USA TODAY High School Sports and wanted to share it with you: %link% For more high school stories, stats and videos, visit http://usatodayhss.com.