QUALITY EDUCATION IS ON THE RISE

After giving Oak Hill Academy (Mouth of Wilson, Va.), ranked No. 3 in the USA Today HSS Super 25, everything it could handle in a, 54-46, loss a week ago, Quality Education Academy (Winston Salem, N.C.) made easy work, 81-57, of a talented Genesis Academy (Lynchburg, Va.) squad Friday night at the Phenom Hoops National Jamboree in Lewisville, N.C.

Currently, the Pharaohs are ranked in the USA Today HSS “Next 25” at No. 31, but Marsellis Purvis (18 points, 12 rebounds) and crew put on a show Friday night that looked like they’re primed for a come-up.

In the ever-evolving world of teenage fashion, one fad has managed to stand the test of time: neon-colored sneakers.

That’s right, the bright look, a must for this past summer on the AAU circuit, has transitioned over to the high school season.

At any given time, no matter the game, 7 of the 10 players on the floor at the Phenom Hoops National Jamboree were rocking the “loud” look.

“It’s one of those looks you can definitely pull off if you’re ‘that’ person,” Huntington Prep (Huntington, W.Va.) forward Thomas Bryant said. “It’ll probably be around for a while. I can pull off anything so it works for me.”

No. 14 Huntington Prep (Huntington, W.Va.) may have prevailed, 67-60, against a pesky Providence Day (Charlotte, N.C.) team, but Irish guard Miles Bridges said if they’re going to fulfill their ultimate goal of winning a national title they’ll have to improve defensively.

“That’s the thing,” said Bridges, who posted 14 points, five rebounds and two assists in the win. “We’ve really gotta just pick it up on the defensive end; I think we’re strong everywhere else, but we have to stop teams. That’s what we’ll work on.”

No. 3 Oak Hill Academy (Mouth of Wilson, Va.) looked plenty efficient in its, 76-57, dismantling of Victory Christian (Charlotte, N.C.) and Warriors guard Josh Reaves was all too intent on making certain the Kings knew it.

From cunning one-liners to dramatic hand claps after scores, Reaves, a Penn State signee, proved that gab is absolutely a gift.

Reaves finished with 13 points in the win.

Even Holy Rams guard Jalen Harris had to laugh when the entire first row of crazed fans repeatedly asked him for a follow on Instagram while the ball was swung around the perimeter.

The Furies didn’t fare as well on the court, falling to Word of God, 80-62, but it certainly wasn’t from a lack of support. 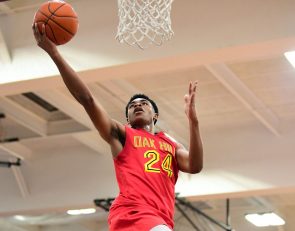 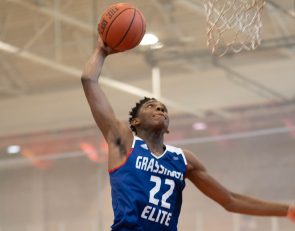 https://usatodayhss.com/2014/phenom-hoops-national-jamboree-miles-bridges-huntington-prep-oak-hill-super-25-thomas-bryant
What We Learned: Phenom Hoops National Jamboree
I found this story on USA TODAY High School Sports and wanted to share it with you: %link% For more high school stories, stats and videos, visit http://usatodayhss.com.