The Southwood girls placed an emphasis on quick starts after coming out sluggish at times this season.

“We finally came out with some high intensity, and we kept that intensity tonight,” said Southwood coach Terry Josting. “They played hard, played good defense, and they had a chance to have some fun.

“We start two freshman along with two seniors and a sophomore. So we look to those seniors for leadership and try to get all of them to play with high intensity the entire game.”

Chelsea Tieuel scored nine of her game-high 25 points in the first quarter, making two of her four 3-pointers.

“The other day we played Ouachita and got a quick jump, but we let them back (in a Lady Cowboys loss),” said Tieuel, who left the game midway through the third quarter. “We knew that we had to get on this team and keep our lead up.”

“We’re really young with 13 of our 15 players being freshmen and sophomores,” said Winnfield coach Patrece Spivey. “We were a little intimidated by Southwood because they’re Southwood.

“It’s that tradition at Southwood, and they can rely on some of their older players to show the younger ones how it goes.”

Hall chipped in with 13 points while Jaiylan Brown added 10 points.

For Winnfield, E. Clements scored nine of her team-high 10 points in the second half.

Winnfield didn’t make its first field goal until the seven-minute mark of the second quarter as Southwood built a 30-1 edge.

The Lady Tigers played Southwood to a 14-9 second-quarter score as the Lady Cowboys led 42-12 at the half. Shaun O’Guin bothered a smaller Winnfield squad, collecting a handful of blocks while patrolling the paint.

The Lady Cowboys played their bench for most of the second halfand protected their initial lead. 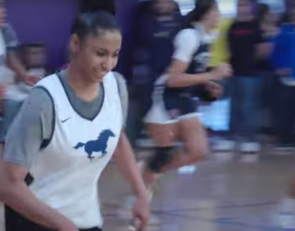 https://usatodayhss.com/2014/southwood-girls-rout-winnfield
Southwood girls rout Winnfield
I found this story on USA TODAY High School Sports and wanted to share it with you: %link% For more high school stories, stats and videos, visit http://usatodayhss.com.