The 28th annual Area Code Games have concluded and the event once again drew a who’s who of players, professional scouts, and collegiate coaches. The annual event is a must stop on the summer tournament/showcase circuit and is played at Blair Field in Long Beach, California which has hosted the event since 1995.

After watching the 20 game showcase event (each team plays five games) here is my Top 10 list for pitchers at the event.

The southpaw was as good as advertised, touching 95 mph with his fastball and showing a devastating 78 mph changeup that he hasn’t thrown much this summer. Groome’s mechanics are so repeatable that it had some scouts calling him a robot. His command of multiple pitches was as impressive as the velocity and ease with which he threw them. The Vanderbilt commit will have a major decision to make next summer because as one scout told me, “there’s your number one overall next year” after his outing.

If Groome is No. 1 then Pint is 1A. It was that close. Pint was simply electric on the mound with a fastball that touched 98 mph and settled in at 96. He also showed a new wrinkle with a slider that touched 84 mph. Pint does not have a “max effort” delivery which has some scouts thinking he could add more velocity. His curveball (82 mph) was one of the best we saw all week. The LSU commit will also have a major decision to make because, as one scouting director told me, “there’s very little separation between these two (Pint and Groome) as the top high school arms in 2016.”

Lawson has lost nearly 30 pounds since last summer and it has shown up in his abilities on the mound. The 6-4, 190 pound Arizona State commit was lights out in his first outing with a fastball that touched 94 mph and a hammer curveball that touched 76. He got three outs on 10 pitches. Lawson backed that up a few days later by continuing to pound the zone consistently at 93-95 mph.

Haire oozes mound presence at 6-3, 215 pounds, with a frame that can easily add another 15 pounds. Possibly the fastest arm in the event, Haire ran his fastball up to 92 and maintained his velocity throughout his outing. His two-plane curveball is a present plus pitch at 76 mph. The South Carolina commit could be next in a long line of power pitchers for the Gamecocks.

Gowdy has all the makings of a first-round pitcher and his outing last week did nothing to make scouts think otherwise. The UCLA commit once again affirmed that he likely has the best slider (80-82 mph) in the high school draft class. The pitch is virtually unhittable for righties and gets into lefties so quickly that it often leaves them puzzled. His fastball velocity (89-91) was down a bit, which is common this time of year for prospects his age, but his ability to throw it black-to-black with run was there.

Kranick had a lot of scout talking during his outing as he showed one of the liveliest arms in the event. He does not throw a straight pitch as his fastball (90-93 mph) has so much movement it almost looks like a cutter. His above average changeup (80-82 mph) had hitters guessing all day. At 6-3, 185, Kranick has the build that could add 20 pounds. He is committed to the defending National Champion Virginia Cavaliers.

Manning is committed to Loyola Marymount University on a basketball scholarship and that skillset has certainly helped the 6-6, 185 pound righty on the mound. Manning generates incredible leverage with his lower body and showed some of the best mechanics on the mound all week. His fastball touched 93 mph and generally worked 91-92 mph during his three-inning outing. His advance curveball (76-77 mph) had one of the highest spin rates per Trackman. Manning also showed advanced feel for a changeup at 81-84 mph.

Measuring 6-6 and 245, Dalatri has the look of a defensive end, instead he’s next in a long line of University of North Carolina pitchers that look like football players. Dalatri was very impressive in his three-inning stint showing an effortless delivery that has scouts salivating about what can be. His fastball (91-93 mph) shows late life when it gets deep in the zone. His curveball (72-74 mph) is a true two-plane pitch that changes the hitters eye levels. Dalatri has the makings of a freshman bullpen guy right out of the gate due to his ability to command and throw two pitches for strikes.

Like Daltri, Peto fits the mold of recent University of North Carolina power pitchers at 6’3” 185 with broad shoulders and a thick lower half. The future Tar Heel showed the best command of one the top curveballs (77-79 mph) we saw all week that he kept in the lower third of the strike zone throughout his outing. His fastball (89-91 mph) showed late run in on righties. Peto maintains his high three-quarter delivery on all of his pitches, which makes things difficult on hitters.

Cleveland makes the list because of how much upside he possesses and if he reaches half of that by next June’s draft, he’s going to hear his name on the second day of the draft. A hyper-athletic 6-5, 200 pound right-handed pitcher, Cleveland had one of the most electric arms in the showcase and already possesses a fastball that touches 93 mph and a slider (76 mph) that shows some teeth. Cleveland is a raw pitcher that is uncommitted, but you can expect that to change before too long.

Les Lukach is the editor of the SoCal High School Baseball blog at http://socalhsbaseball.blogspot.com/. Follow on Twitter: @LesLukach 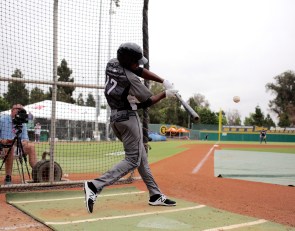 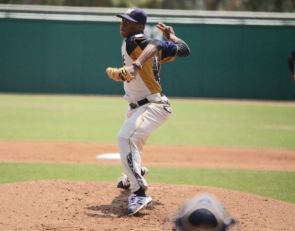 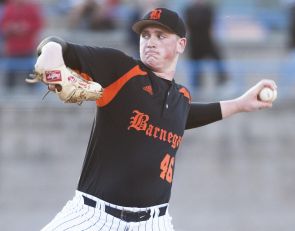 https://usatodayhss.com/2015/2015-area-code-games-top-10-pitchers
Top 10 pitchers highlight the 2015 Area Code Games
I found this story on USA TODAY High School Sports and wanted to share it with you: %link% For more high school stories, stats and videos, visit http://usatodayhss.com.