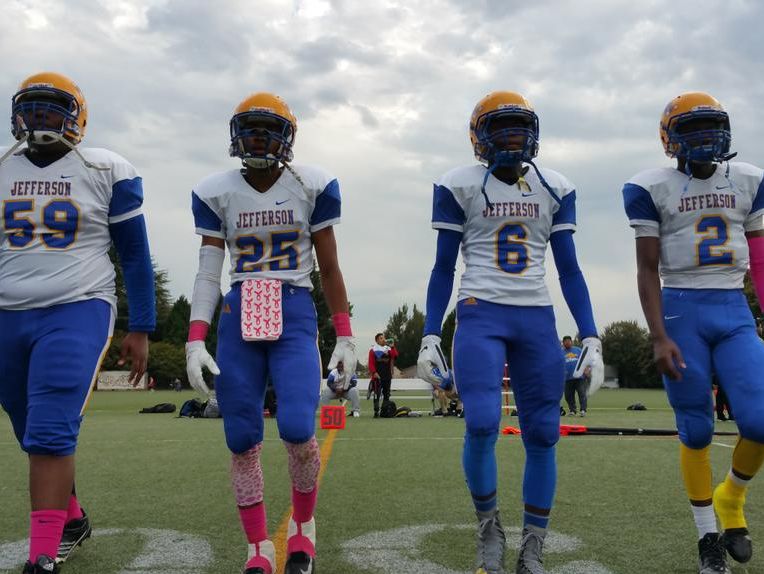 Jefferson gets ready for KGW’s Game of the Week against Benson.

PORTLAND, Ore. — It’s the second-to-last week of high school football regular season so league titles and playoff spots are on the line. Here’s a look at five of the top Week 8 games.

High school football doesn’t get much better than this matchup.

The two teams are tied for first place in the Northwest Oregon Conference. The winner has the inside track to a league title with just one more game left in the regular season.

Wilsonville, led by junior four-star quarterback Connor Neville, is averaging 54 points a game, the most of any 5A team this season.

The Wildcats will be tested though by Liberty’s defense, which has allowed just 11 points a game, the second lowest in 5A.

The Rams have settled into a groove since starting the season 0-2 and are in first place in the Mt. Hood Conference. The two-time defending state champions have a win over No. 7 Oregon City, and have won its last four games by at least 16 points. A win against Clackamas puts them one win away from another conference title.

Clackamas is looking for redemption Friday night. The Cavaliers were thumped by No. 7 Oregon City two weeks ago, 62-14, and are looking to show they can compete against the state’s best teams. A win would put the Cavaliers in a likely three-way tie with the Rams and Oregon City for first place in the conference.

Both teams’ one loss was to No. 2 Sherwood and this matchup will have an impact on playoff seeding.

West Linn is ranked third in the OSAA rankings, which determines playoff rankings, and Tualatin is ranked No. 9. A Timberwolves win could catapult Tualatin into a possible top four seed, and a loss could drop West Linn out of the top four. The top four seeds have home-field advantage throughout the playoffs until the semifinals, when games are played at a neutral site.

The winner will also be alone in second place in the Three Rivers League, behind Sherwood.

KGW’s Game of the Week

South Salem is looking to defend its Greater Valley Conference title. Led by quarterback Gabe Matthews, the Saxons have scored at least 34 points a game, including four 50+ point games.

This week’s challenger is McNary, who is coming off a heartbreaking 43-40 loss to West Salem. The Celtics are led by senior dual-threat quarterback Trent Van Cleave.

Both teams have clinched playoff spots, but a win for McNary would lift them from their No. 28 OSAA ranking. South Salem is ranked No. 5 and looking to jump into the top four.

This matchup has significant playoff implications. The top four teams from the PIL earn an automatic playoff berth, and it’s possible those will be the only PIL teams to qualify for the 32-team postseason.

The winner of this game will likely earn an automatic playoff berth, while the loser will likely have to hope its OSAA ranking is high enough to earn an at-large berth.

https://usatodayhss.com/2015/5-games-to-watch-in-week-8-of-the-hs-football-season
5 games to watch in Week 8 of the HS football season
I found this story on USA TODAY High School Sports and wanted to share it with you: %link% For more high school stories, stats and videos, visit http://usatodayhss.com.