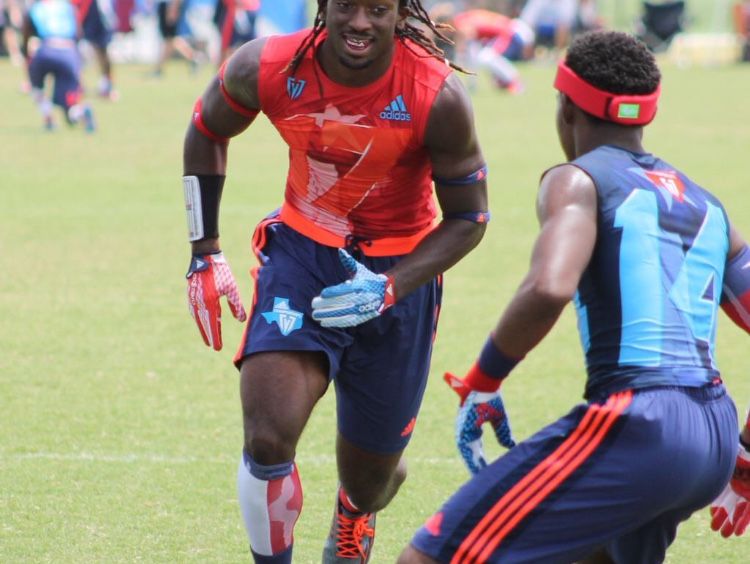 COLLEGE STATION _ Interesting sight No. 1: When DeSoto’s heralded quarterback Tristen Wallace goes out for not having a mouthpiece, it’s talented defensive back Caleb Abrom who comes in to throw one wobbly pass.

If DeSoto does need a backup QB, it’ll likely be Kadarrian (K.D.) Nixon moving in from wide receiver in a pinch and he might do as well at Jaylin Nelson did last year when Wallace missed eight weeks with a broken leg. Nixon was star middle school QB and Nelson transferred to Duncanville this spring.

DeSoto’s QB of the future could be 6-2 sophomore Courtney Douglas, who also is a point forward for the perennially strong hoops program.

The 6-4 Wallace, a much heralded Ohio State commit, is a good hoopster too _ one with a jump shot before the lure of #txhsfb took priority.

Of course, there is LSU commit receiver Dee Anderson who made a couple plays you would expect an LSU receiver to make (Odell Beckham went to LSU if you don’t recall and he was just one of the guys). The tall, lanky Anderson is much quicker than you’d expect for a 6-3, 175-pounder who transferred from West Mesquite in June.

The 2012 champ with a victory over Manvel, Plano looks good with 6-5 quarterback Matt Keys healthy. Plano also has a QB candidate in Quinn Waterbury, who is playing summer baseball. Plano has a highly recruited running back with Brandon Stephens and a future player to watch with Class of 2018 athlete Dante Nicholson .. The 7-on-7 coached by former Wildcat CJ Martin, who played with the winning Wildcats teams with Rex Burkhead.

Coppell has two talented quarterbacks in Myles Paschall and Brady McBride, who alternate in 7-on-7 … Coppell already returned some talent with wide receivers Josh Fink and Obi Obialo and running back Brandon Rice. McBride returns with his father Joe McBride being named Coppell ISD AD and brought back assistant Steve Fex, whose son Joe Fex is a sophomore defensive back/running back extraordinaire … Keep an eye on T.J. McDaniel, the younger brother of Cam McDaniel (Notre Dame RB) and Gavin McDaniel (Washington RB), who is starting at cornerback and already is as tall as brothers as a Class of 2019 .., Another talented 2019 player to watch for Coppell is RB/DB Jonathan McGill,.

Intrigued by Lovejoy QB Bowman Sells. Looks like a great fit for @CoachTomHerman at Houston. #tx7on7pic.twitter.com/8OOq9Ys4iC

https://usatodayhss.com/2015/adidas-7on7-tournament-leaders-desoto-plano-coppell
Adidas 7-on-7 Tournament leaders: DeSoto, Plano, Coppell
I found this story on USA TODAY High School Sports and wanted to share it with you: %link% For more high school stories, stats and videos, visit http://usatodayhss.com.