PORTLAND, Ore. – Benson High School players have had Friday night’s game against Jefferson marked on their calendars all season. It was the one opportunity they would have to play a varsity team. 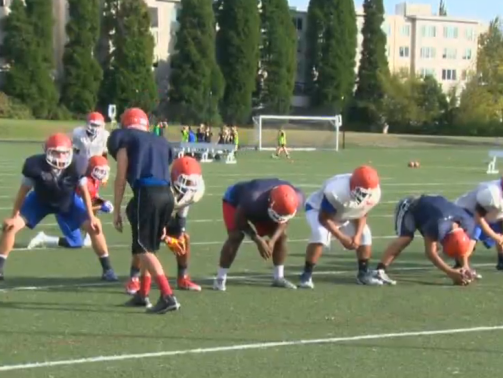 Benson decided in February to not field a varsity football team for the 2015 season after the school’s winless season in its return to 6A in 2014. The lack of competitiveness and low player turnout led to the school’s decision to just have a junior varsity team.

However, Jefferson High School, who would have had a bye week this week, agreed to play Benson as a varsity game to fill its schedule for the week.

Not only would Jefferson get an extra game, but Benson players would get an opportunity to see how they stacked up against varsity competition. The game was even voted as KGW’s Game of the Week.

But on Thursday, the Benson athletic department was notified by the Portland Interscholastic League office that Friday’s game would not be a varsity matchup.

“It gets a little tricky when you match up a varsity team versus a JV,” Benson athletic director Sanjay Bedi said. “I think we’d be able to compete against them. It’s just tough whether it’s a win or loss both ways, especially for a varsity team.”

Related: 5 games to watch in Week 7 of the HS football season

As a result, Benson will play Jefferson’s JV team instead of its varsity team.

“It’s a little disappointing but I tried to tell the kids it’s another challenge we got to face,” Benson head coach Devarieous Sly-Clay said.

“I know some of the kids that’s on the varsity team that are seniors just like me and I wanted to play against them because they’re some of my friends,” defensive lineman Malik Moore said.

Despite the disappointing news, Friday will still be a special night for Benson. The game is still KGW’s Game of the Week, and the school intends to honor the four seniors, such as Moore, who decided to stay at Benson even though they knew they would not be playing varsity football.

“It’s important to recognize and celebrate them,” Bedi said. “Whether it’s a year or two years down the road, we’ll have a varsity team again and it will be in large part to what this group is doing now.”

The Techmen JV team is 3-2 so far this season and coming off a 40-18 win over Franklin last week. Sly-Clay said the team turnout is around 45 players who are consistently improving.

“Originally, in May, I had no idea what I was going to have,” he said. “But over the summer and over the course of the last couple months it’s been great.”

That steady improvement is what will determine when Benson brings back varsity football, Bedi said. The lack of a varsity game this season will have no impact.

“This wasn’t the big one just because we were going to play a varsity team.”

Kickoff for Friday’s game against Jefferson is scheduled at 5 p.m. at Buckman Field.

Subway customer with rodent in sandwich: ‘It was unfortunate’

https://usatodayhss.com/2015/benson-varsity-game-changed-to-jv-seniors-will-still-be-honored
Benson varsity game changed to JV; seniors still to be honored
I found this story on USA TODAY High School Sports and wanted to share it with you: %link% For more high school stories, stats and videos, visit http://usatodayhss.com.