The school district sent the assistant coach a letter in September ordering him to stop his post-game prayers.

Superintendent Aaron Leavell wrote in a letter, that a coach’s conversations with players “must remain entirely secular in nature, so as to avoid alienation of any team member and, importantly, violate the law and our Board policy.”

Initially, Kennedy complied with the order from the district. The first week after their ruling, he addressed his players and the crowd after the game, but did not pray or mention his beliefs.

He waited until later in the evening of Sept. 19, when the lights were off and the stadium was empty, to pray alone at midfield.

But at a press conference on Wednesday Kennedy said he will pray this week, and he has support from a national nonprofit.

The Liberty Institute sent a letter to the district asking them to rescind their ban on Kennedy praying by Friday at 5 p.m., but Kennedy said he would pray regardless of the school’s response.

Kennedy said he would file a lawsuit against the district if he is fired for praying, citing his first amendment rights.

Liberty Institute call itself “the largest nonprofit legal organization in the nation dedicated solely to defending religious liberty in America.”

For related stories go to KING5. 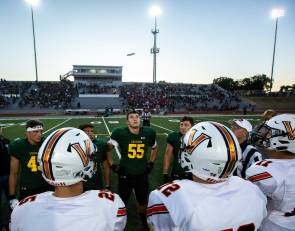 https://usatodayhss.com/2015/bremerton-football-coach-says-he-plans-to-pray-at-game
Bremerton (Wash.) football coach says he plans to pray at game
I found this story on USA TODAY High School Sports and wanted to share it with you: %link% For more high school stories, stats and videos, visit http://usatodayhss.com.