Brennan linebacker Allen back for third year as starter

Brennan linebacker Allen back for third year as starter 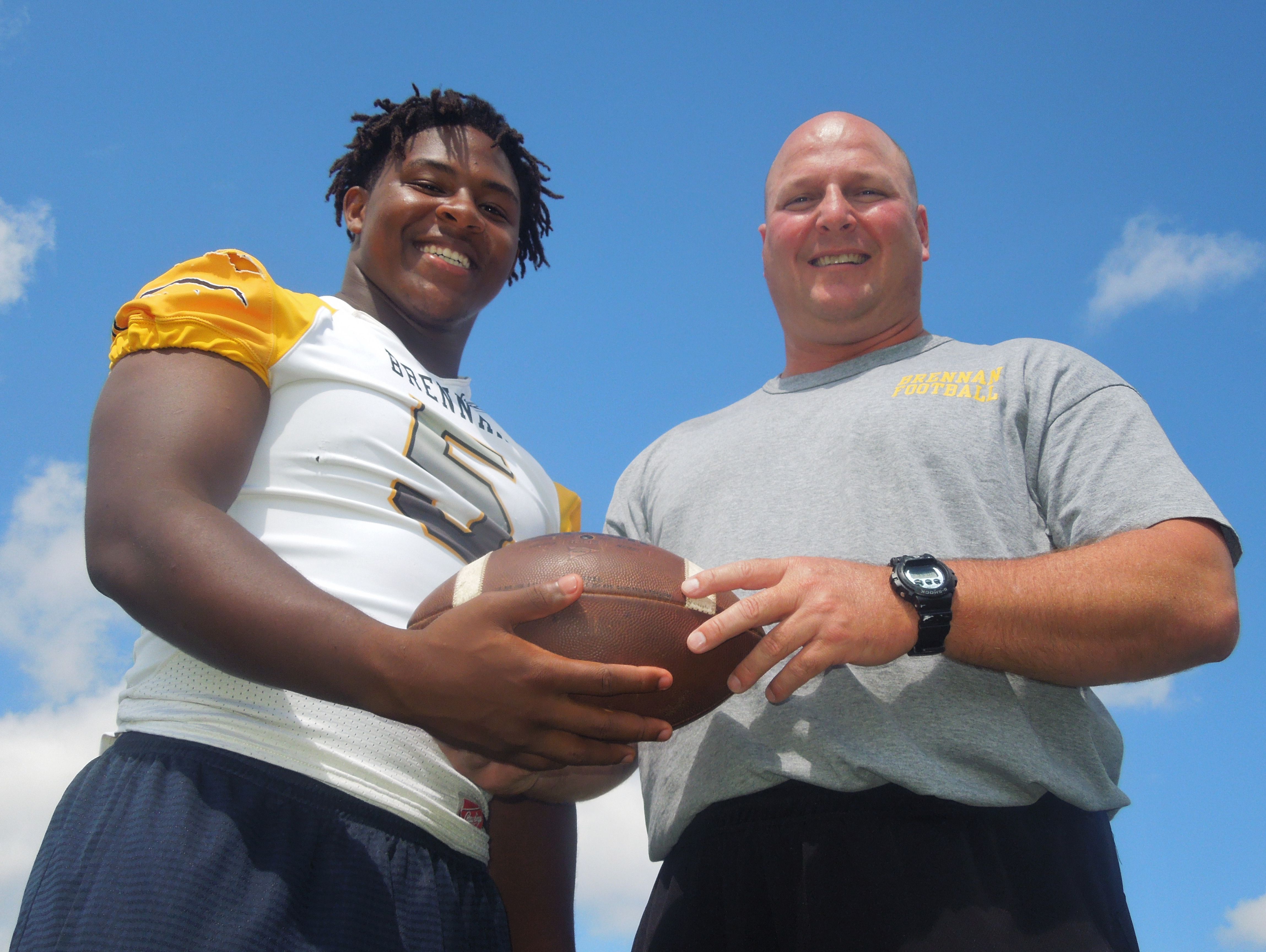 Ask Brennan football coach Stephen Basore to talk about the primary strengths of senior middle linebacker D.J. Allen and he’ll cut to the chase as quickly as Allen runs down ball carriers.

“He’s kind of got the whole package,” Basore said Thursday.

Strong, fast, quick and relentless, Allen will be the leader of a Bears defense that could be just as good this season as the units Basore and defensive coordinator Jacob Salinas have put together the past two years.

Anchored by middle linebacker Grant Watanabe and end Derek Roberson, Brennan allowed only 82 points and recorded nine shutouts in 2013, when the Bears lost in the Class 4A Division I state final and finished 15-1. The Bears yielded 106 points and pitched four shutouts in an 11-1 season last year.

That Brennan has held opponents scoreless in almost half of the 28 games it has played the past two seasons has set the bar high for a program starting just its sixth year. The Bears are favored to successfully defend their District 27-6A title.

“We take a lot of pride in getting all those shutouts because we’re the No. 1 defense in San Antonio and want to keep it that way,” Allen said. “We work hard to be ready every week, and Coach Basore and the rest of the coaches do a great job of preparing us for anything. The coaches preach to us to be perfect, be perfect, be perfect. No busts. If you stay perfect, you’ll keep getting shutouts.”

A sophomore starter on Brennan’s state finalist, Allen was the Bears’ leading tackler last year after moving from outside linebacker to middle linebacker to replace Watanabe, now at Colorado. Allen earned second-team All-State honors last year, finishing his junior season with 113 tackles, including 20 for a loss, and four sacks.

“He’s kind of got all strengths because he’s a real good all-around linebacker,” Basore said. “He plays the run very well. He has great speed and quickness. He’s very explosive. We could probably put him in the (offensive) backfield and he’d probably run over some people and get some yards. He’s got a good combination of strength, speed and quickness.

“In terms of pass coverage, he can get out and cover quickly. A lot of it is eyes and feet. We talk about that a lot with our kids. He’s played 7-on-7 in the summer and that’s helped him recognized things in the passing game.” 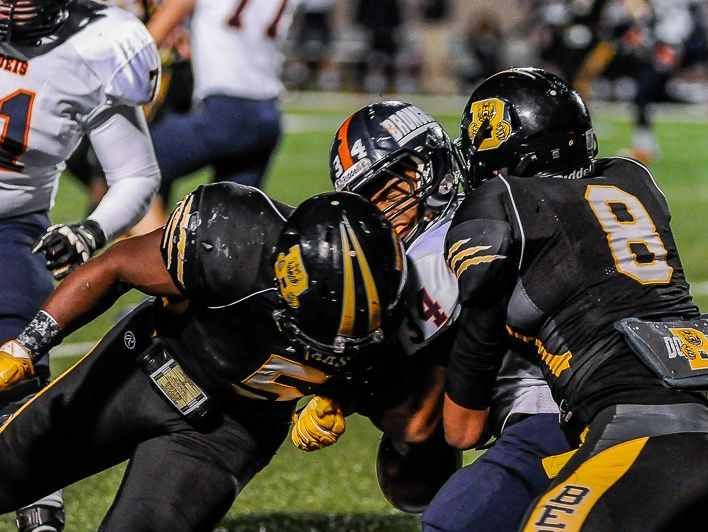 Like Watanabe, Allen is an exemplary leader on and off the field.

“D.J. got to learn under Grant and that’s been beneficial to him,” Basore said. “That probably helped D.J. mature and understand a little bit more. They’re very similar in terms of being leaders on the team, and they both have a pretty good understanding of what we do defensively. D.J. is now filling the role that Grant had when we went to state.

“D.J. is the kind of leader that sets the standard. He sets expectations for himself and the other guys on the team. D.J. had a great sophomore year and a great junior year. Typically, sophomores don’t always set the world on fire, but he had a really good sophomore year. I expect him to have a great senior year.

Allen, 5-foot-10½ and 210 pounds, attended football camps at the University of the Incarnate Word, North Texas and University of Houston last month. Allen is participating in a camp at Tulsa on Friday and plans to attend UTSA’s camp later this month.

“D.J.’s got some possibilities to play at the next level,” Basore said. “He makes good grades so he’s got himself set where if he gets the opportunity, he can play himself into it.”

Football runs in Allen’s family. His father, Shay, played running back and quarterback at Jay, and two uncles, Kyle and Torii Allen, are former Mustangs quarterbacks.

“I just love to play football,” Allen said. “I’ve been playing since I was 7, and it’s my favorite sport.” 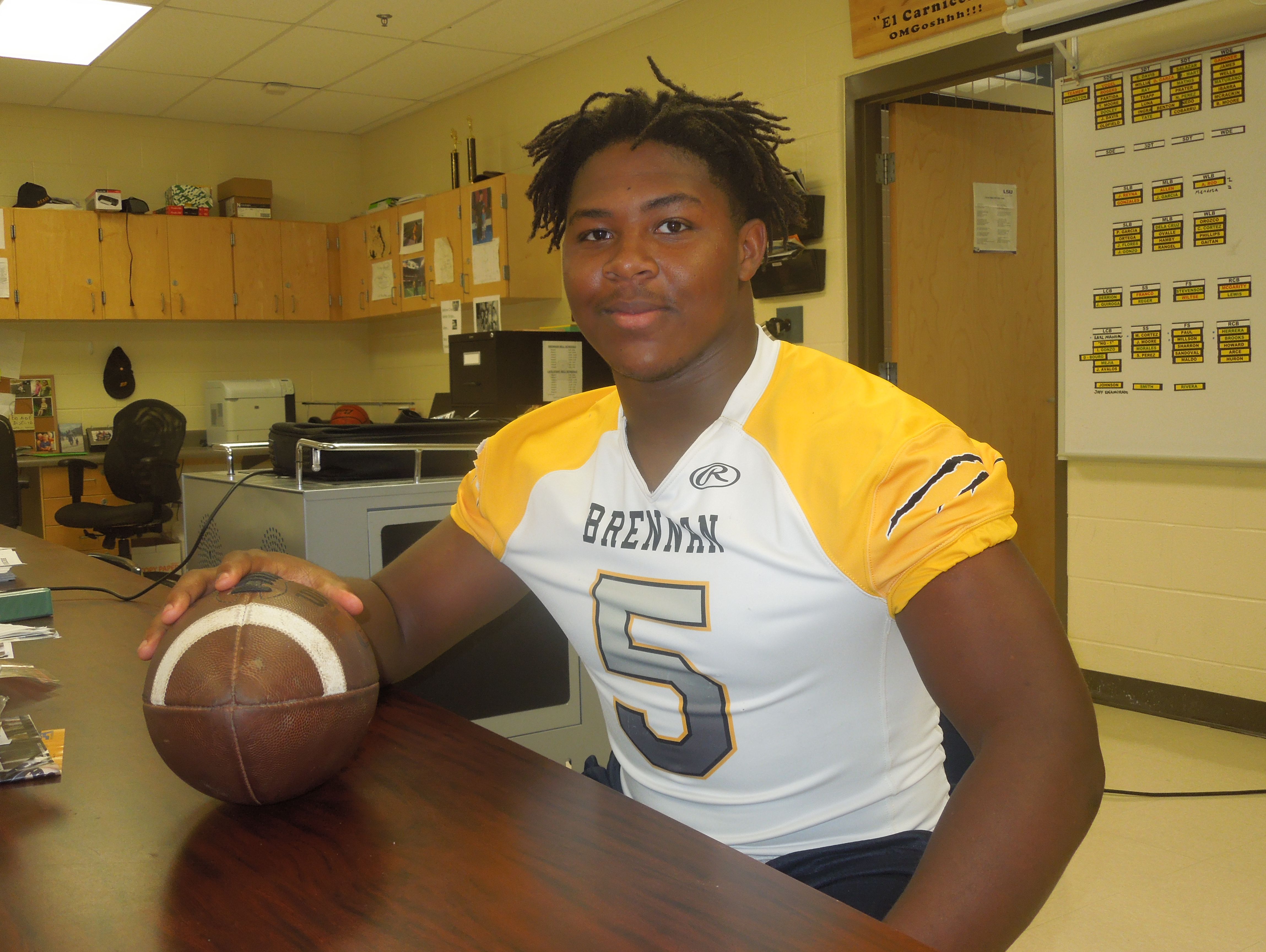 Brennan senior middle linebacker D.J. Allen has started on defenses that have recorded 13 shutouts in 28 games the past two seasons.

Respectful and courteous, Allen leaves a good impression wherever he goes.

“He’s got a great personality and a lot of charisma,” Basore said. “He’s a genuinely nice kid. He works hard, obviously, and has a lot of talent. He’s been a real fun guy to work with for the last two years and coming into his senior year.”

Brennan had yielded only 51 points in 15 games in 2013 before falling to Guyer 31-14 in the state final. Guyer was led by blue-chip quarterback Jerrod Heard, now at Texas. The loss at AT&T Stadium, home of the Dallas Cowboys, still haunts Allen.

“We want to get back there and win it this time,” Allen said. “Denton Guyer was a really good team, but we kind of shot ourselves in the foot. We had them at times, but we dumbed it up. It would be great to win state my senior year.”

https://usatodayhss.com/2015/brennan-linebacker-allen-back-for-third-year-as-starter
Brennan linebacker Allen back for third year as starter
I found this story on USA TODAY High School Sports and wanted to share it with you: %link% For more high school stories, stats and videos, visit http://usatodayhss.com.