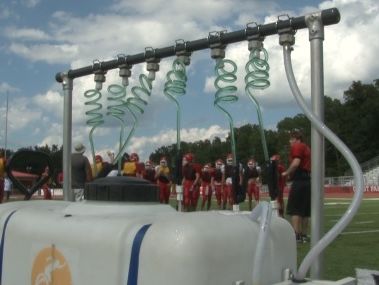 CABOT, Ark. (KTHV) – One of central Arkansas’ school districts is raising the bar when it comes to healthcare and treatment of its student athletes.

Many school districts in Arkansas don’t even have one certified athletic trainer on-staff. Cabot has four of them, and they’re changing the way high school athletes are getting care in school districts around the state.

Cabot Schools head Athletic Trainer Jason Cates has been the driving force behind transforming the district’s philosophy when it comes to student-athlete health. Not only that, but he teaches other coaches and trainers all over the state about it.

“I think that they’re a little bit taken back because of the depth of some of the things that we do,” said Cates. “But once we show them how we do it and how we go about it and why we do it, the science behind it, everything we do is evidence-based, it’s not a knee-jerk reaction.”

“Coming here and seeing the facilities, I was in shock and a lot of our counterparts that work across the state are somewhat envious of what we have to offer here because we do have such great, state of the art facilities and our administration puts such a big emphasis on what we do,” said Lyndsey Rich, who started with Cabot Schools last year and says any district can take this approach with the right commitment from administrators. “We saved our student athletes’ parents $400,000 last year by taking care of their kids and I think that can be done in any school district, where there’s a will, there’s a way.”

“They’ve made my job a lot easier because I don’t have to worry about that as much. In football we always have one at all the practices and all the games so if something does happen they’re Johnny on the spot,” said Panthers head football coach Mike Malham. “I’ll tell you one thing we do have, we have more injuries now than we used to because kids know ‘hey, I’ll go to the trainer, my hamstring’ or something, and I’ll say ‘oh, rub some dirt on it and get out there’.”

“We’re taking care of a parents’ most prized possession: their child,” added Cates. “And we feel like if we do our job right then, how they sent them to us in the morning, we should sent them back to them the same way in the evenings.”

https://usatodayhss.com/2015/cabot-schools-on-cutting-edge-of-athlete-care
Cabot schools on cutting edge of athlete care
I found this story on USA TODAY High School Sports and wanted to share it with you: %link% For more high school stories, stats and videos, visit http://usatodayhss.com.