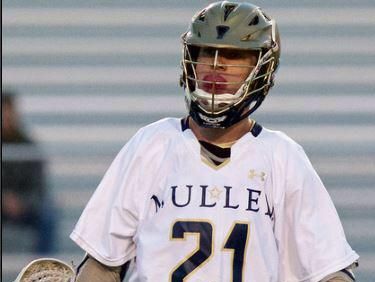 Caleb Rueth with the Mullen Mustangs

KUSA — Mullen Mustangs senior, Caleb Rueth, will be part of the 2015 U.S. Jr Indoor Lacrosse team. The Ohio Northern commit is listed as a midfielder on the the 27 man U.S. roster, but is normally an attack for the Mustangs.

According to the US Indoor Lacrosse article:

“‘We have assembled a talented and passionate group of lacrosse players whom all possess several key attributes we were looking for to give us the best opportunity for Gold in September. Beside pure lacrosse skills, we were looking for strong character, coach-ability, athleticism, and a team first attitude that all will best contribute to a family atmosphere and team success. Box lacrosse is a sport that demands a do anything for your brothers attitude and we have a group that not only will run and gun but will get down and dirty for each other when needed.’ said Team USA Junior Indoor Head Coach Randy Fraser.”

Rueth had eight goals and 10 assists in 12 games for last years 2014-15 Mullen lacrosse team. The Mustangs went 6-10 last year, with coach Logan Bobzien. “It was tough to leave Arapahoe and even tougher to leave Mullen,” said Bobzien. “They have a great program there and I really had to reflect upon my decision.” Bobzien left the team this summer to return to his alma mater, the Arapahoe Warriors.