Goshen’s Daniel Rosales is this week’s boys soccer Athlete of the Week.

Carmel boys soccer coach Sean Schmidt never panicked. Not when his team was down 2-0 to Guerin Catholic in the first half of Wednesday’s sectional semifinal or even with the score tied up at halftime during Saturday’s final vs Zionsville.

In both instances, Schmidt’s team was able to come through for him. Now he and his squad are headed to the regional round of the state tournament.

Two second half goals from Joel Hudson and Evan Shaw propelled the Greyhounds to a 2-0 victory on Saturday, as well as the sectional championship. For Coach Schmidt, the feat was one he knew his team was capable of, even when it wasn’t looking that way.

“In the first half on Wednesday, we played like a bunch of individuals,” said Schmidt. “We went through a couple of phases like that this season, where we just weren’t moving the ball around like we should have been. Thankfully, we have a mature group and we were able to play to our potential the next three halves that we played.”

Saturday’s victory over Zionsville marks the third time in the last four years that Carmel has emerged as sectional 17 champion, and going forward the Greyhounds want to go further than they have in those previous three attempts.

“I feel good about where we are at,” said Schmidt. “We have a team that works hard and knows what it will take to get to where we want to go. Focus will be key, and more importantly playing as a team is big.”

The first half against Zionsville was a tightly contested affair. Both teams had their fair share of opportunities on goal, but neither side would be able to find the back of the net. With the shot count evened up at the half, both teams felt like it was their game to take.

That would last until early in the second half, when Carmel’s Joel Hudson picked up the ball just on the outside of the 16-yard box and fired it into the upper left-hand corner of the Zionsville goal.

“When I got the ball at my feet, I looked up and saw that I had some space,” said Hudson. “From there I was just looking to bend it around the keeper and luckily it worked out perfectly.”

Carmel would ice the game 12 minutes later, as Evan Shaw was able to outwork his defender to the ball and put on a couple of nifty moves, allowing him the chance to slot the ball by the Zionsville keeper.

“I worked hard to get the ball from the defender,” said Shaw. “Once I was in front of goal, I saw some space to the left and went for it.”

The final whistle would blow 20 minutes after Shaw’s goal, with the final score 2-0 in favor of the Greyhounds.

Echoing the sentiments of many Carmel players, Shaw commented that the potential exists for the next couple of weeks to be special.

“I think we can be the best team in the state,” said Shaw. “We just have to continue what we do best best and we can beat anyone.” 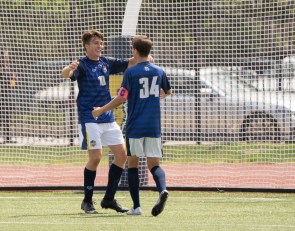 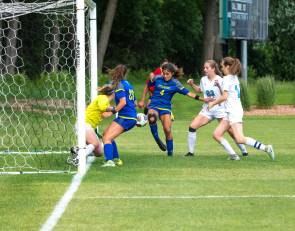