Class A: Detroit Western boys on trail to state semis

Class A: Detroit Western boys on trail to state semis

Detroit Western’s Brailen Neely listens to his head coach Derrick McDowell in the second half of Western’s 58-37 win over Ypsilanti in the Class A quarterfinal at Calihan Hall on Tuesday.

That didn’t bode well for Ypsilanti.

McFolley and Blackshear, current seniors at Detroit Western who are committed to U-D Mercy for next fall, led the Cowboys to a commanding, 58-37 win Tuesday night in the Class A quarterfinal on the Titans’ home court.

The No. 1 ranked Cowboys (25-0) earned the trip to Michigan State’s Breslin Center for the semifinals thanks to McFolley’s 19 points — 16 in the second half — and Blackshear’s 12 points in the paint and 19 rebounds.

“I don’t know if any of our guys have been up there,” Western coach Derrick McDowell said about the next stop on the tournament trail. “I think they just want to win. Our goal wasn’t to get to Breslin, our goal was to win it all.”

The game was a tall order for Ypsilanti (19-6), which was undersized but put up a good fight. Western led wire-to-wire but really couldn’t shake off the Grizzlies until a late second-quarter 9-0 run made the halftime score 29-14.

“I just wanted us to be sharp, play clean, be aggressive,” McDowell said. “Didn’t want a drag-it-out game. Wanted to run our stuff. This week we were practicing and really looked good, so I felt real confident in the way we’re playing.

“We’ve seen everything this year, so the score didn’t matter. We’re playing our game.”

Blackshear led the first-half scoring and was dominant inside. McFolley picked it up in the second half by scoring 10 of the team’s 13 points in the third quarter. He continued to launch three-pointers, seemingly deeper each time, making five for the game.

“It was tough the first half, but my teammates told me to just stick with it and always play hard,” McFolley said, adding that he has the green light to shoot from the outside. “But Coach always tells me to play defense. I can’t just come down and shoot. He always says the reward side of defense leads to offense.

Ypsilanti senior Avery Williams led the Grizzlies with 12 points and Corey Allen added 11. Ypsilanti shot 15-for-44 (34.1%) from the field, with many shots clearly altered by the taller Cowboys. 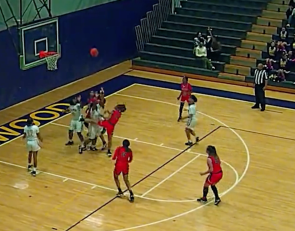 https://usatodayhss.com/2015/class-a-detroit-western-boys-on-trail-to-state-semis
Class A: Detroit Western boys on trail to state semis
I found this story on USA TODAY High School Sports and wanted to share it with you: %link% For more high school stories, stats and videos, visit http://usatodayhss.com.