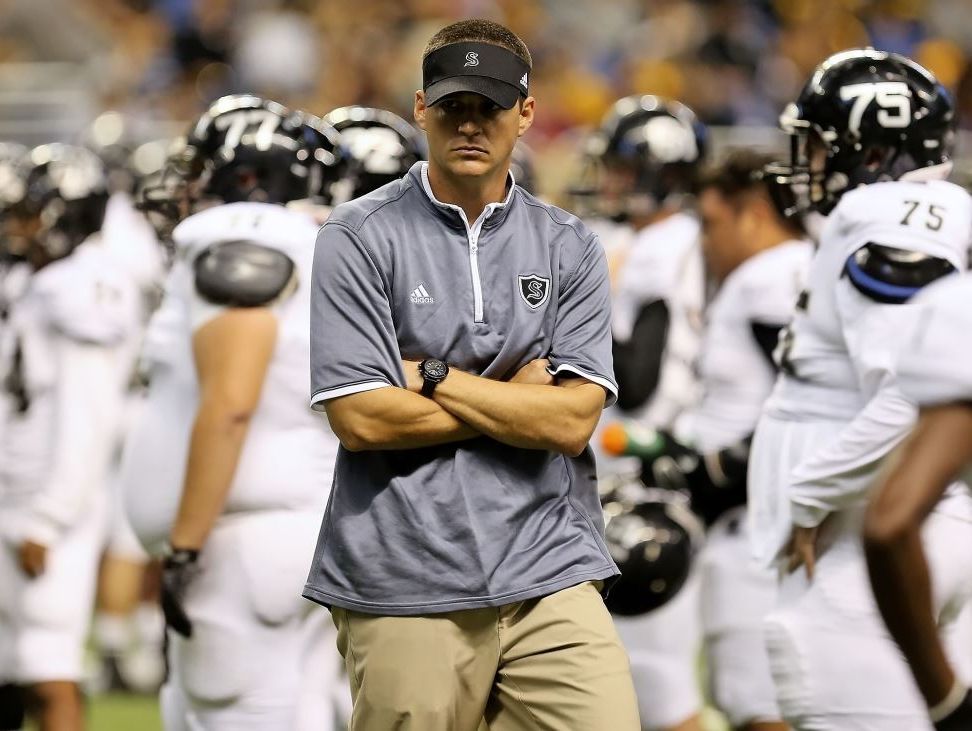 Scott Lehnhoff, a 1999 Clemens High School graduate, has gone 38-4 since succeeding Mike Jinks as head football coach at Steele in 2013.

A 1999 Clemens High School graduate, Scott Lehnhoff was the Buffaloes’ starting quarterback as a junior and senior.

This week, Lehnhoff will lead the Steele Knights against his alma mater. He has faced Clemens before, the Buffs and Knights have been in the same district the past two years, but it’s different this time.

“It will be different,” Lehnhoff said Monday night.

Lehnhoff, who has coached at Steele since it opened in 2005 and was promoted to head coach in 2013 when Mike Jinks left for Texas Tech, never has faced Clemens in the playoffs.

The Knights (13-0) and Buffs (11-2) won third-round playoff games last Friday night, setting up a rematch in the Class 6A Division II state quarterfinals. Kickoff is at 4 p.m. Saturday at the Alamodome, where Clemens edged Brandeis 35-31 in a second-round game Nov. 20.

Saturday’s game will be a rematch of a District 25-6A game won by the Knights, 31-7, on Oct. 2. Steele, which played its first varsity season in 2006, is 4-0 against Clemens. The Knights are in the state quarterfinals for the fifth year in a row and third time under Lehnhoff, who is 38-4 at Steele.

Not only are Clemens and Steele in the same University Interscholastic League district, they’re both in the Schertz-Cibolo-Universal City Independent School District.

“We root for Steele when they’re playing everybody but the Buffaloes,” Clemens coach Jared Johnston said. 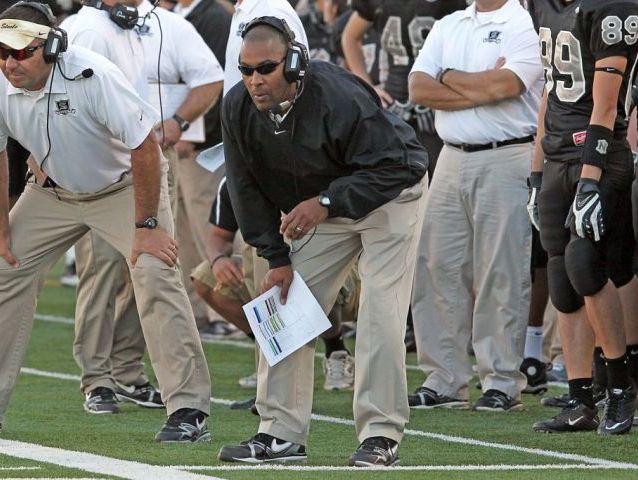 The Clemens-Steele football rivalry, which began in 2014 when the UIL placed the schools in the same district, has been tabbed the “Battle of 3009,” a takeoff on the main road, FM 3009, that divides SCUCISD’s two high schools. Clemens and Steele are less than 3.5 miles apart and are in Schertz and Cibolo, respectively, on the outskirts of northeast San Antonio.

“This is not like the 3009 game, the rivalry that the kids get excited about when we play Clemens in district,” Lehnhoff said. “This is different. It’s just another game we’ve got to win to get to the state semifinals. If you have to use a rivalry to get yourself ready in the playoffs, there’s something wrong.”

The Knights’ offense could be severely limited Saturday after quarterback Xavier Martin (ankle) and running back Bryson Denley (knee) were knocked out of the game against Del Rio last Friday night. Martin is listed as day-to-day by Lehnhoff, but he wasn’t as optimistic about Denley’s status.

“Xavier has a better chance of playing that Bryson,” Lehnhoff said.

Denley was injured on Steele’s first play from scrimmage and didn’t take another snap in the Knights’ 28-10 win. Denley rushed for 151 yards and two TDs on 15 carries before getting injured early in the fourth quarter.

Junior Cody Massey stepped in at quarterback and completed 10 of 15 passes with no interceptions for 80 yards. Travell Lumpkin finished the game as Steele’s leading rusher with 164 yards on 26 carries and one TD.

“Cody did a great job for us,” Lehnhoff said. “It’s always a nightmare when you lose your quarterback in a game, especially after one-on-one play. We really didn’t have to change much for Cody. He knew what the game plan was, and he executed it.”

Johnston didn’t hesitate when he was asked what Steele QB he expects to see on the field Saturday.

“We’re preparing for the Steele Knights,” he said. “What I do know is they’ve got depth. They’re not ranked No. 3 in the state because of one kid. With that in mind, we’re expecting them (Martin and Denley) to be there. I’m sure if those kids can go, they’re going to go.” 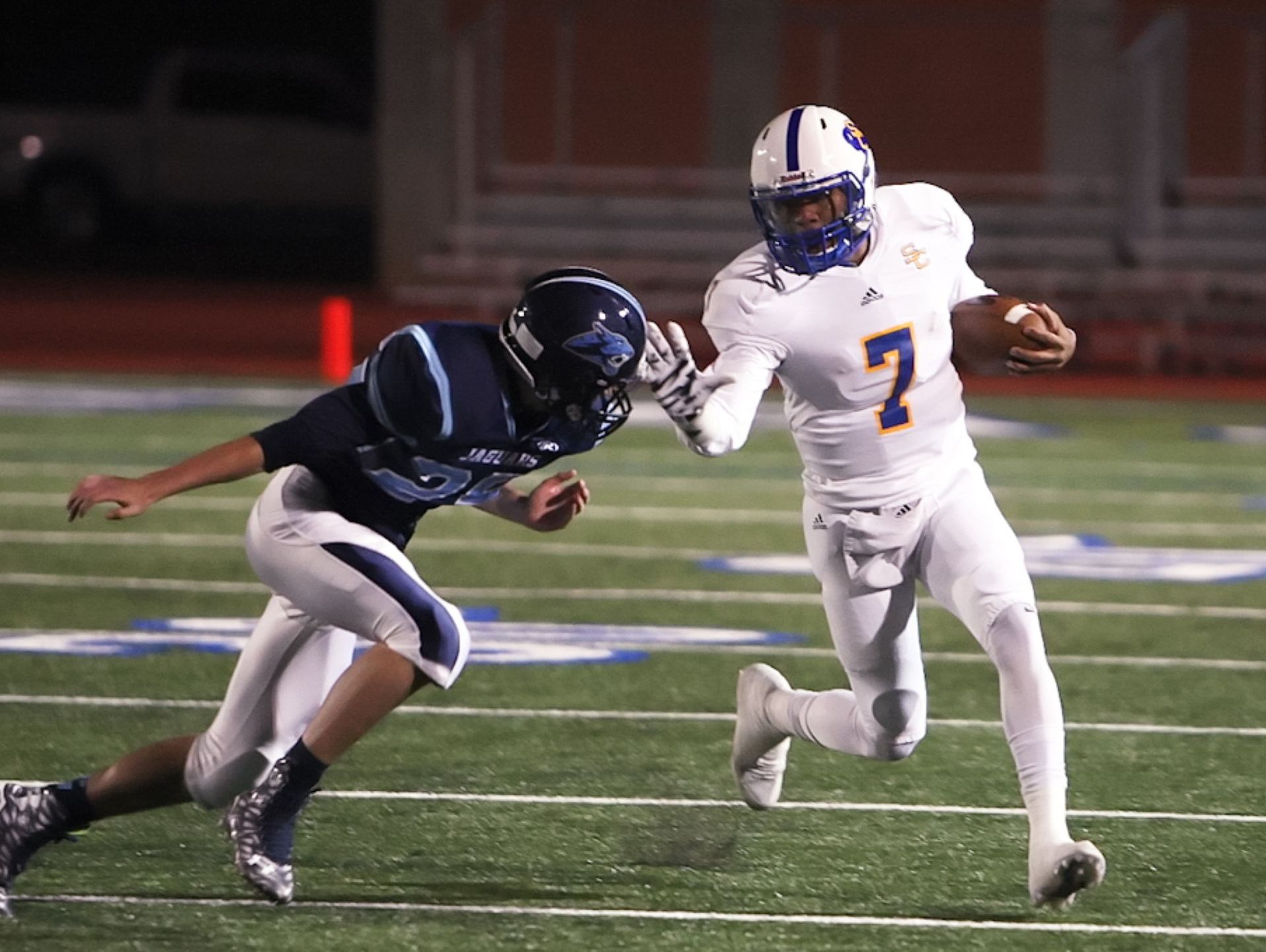 Clemens quarterback Frank Harris, on the run against Johnson in the playoffs, has amassed more than 4,500 yards of total offense and accounted for 53 TDs this season.

Johnston was an assistant coach at Steele for seven seasons before succeeding Greg Ferrara as head coach at Clemens in 2012. After going 0-10 in Johnston’s first season, the Buffs made the playoffs in 2013 and finished 8-3.

Clemens is in the state quarterfinals for the first time since 2006, when it reached the 4A semifinals. Saturday’s game will be the Buffs’ first state quarterfinal in the UIL’s largest classification since 2003, when Robert Lehnhoff was in his next-to-last season as Clemens’ head coach.

“We respect what Steele has done,” Johnston said. “They’ve got a great program. Having coached there, I know the caliber of athlete they’ve got and the depth they have. Our kids are having a great season themselves and are looking forward to the challenge Saturday.”

Led by classic dual-threat quarterback Frank Harris, Clemens finished third in 25-6A. The Buffs’ only other loss in the regular season was to runner-up Judson (49-35).

Harris, a junior, has been one of the most prolific quarterbacks in the state this season, piling up 4,559 yards of total offense and accounting for 53 touchdowns. He has passed for 1,947 yards and 17 TDs, and rushed for 2,612 yards and 36 TDs while averaging 11.7 yards per carry.

“Harris is a lot like Johnny Manziel,” Lehnhoff said, referring to the former Kerrville Tivy quarterback Steele played against. “He’s a great playmaker.”

Steele has been the area’s most successful team in the past decade, winning a state title in 2010, advancing to a state final in 2011 and reaching the state semifinals in 2012 and 2014.

The Knights came within a few plays of making another state final last year, losing to Katy 27-20 in a heart-breaker. Steele has gone 81-8 since 2010, when it started its championship season 1-2 and went 13-0 the rest of the way to finish 14-2.