For 80 years, in three iterations, they have been the Conrad Redskins.

The school newspaper at the former Conrad High School was called the Smoke Signal. Majorettes wore headdresses during halftime shows.

But now, officials at what is now known as Conrad Schools of Science are taking steps to change the controversial mascot for its athletic teams before the 2015-16 school year.

A group called the Retire the Mascot Committee has met three times since Feb. 9. The committee describes itself as “a collaboration of students, staff, alumni and community members committed to retiring the current mascot and selecting a new, yet to be named, mascot which is welcoming to all members of the diverse community of which we serve.”

The committee plans to build support in the form of petition signatures and letters in April, select a new mascot in May, make a proposal to the Red Clay Consolidated School District in June and seek board action on the proposal in July.

“We’re really at the beginning of planning the scheme of what it could look like in regard to hopefully making the mascot retire,” said Barbara Prillaman, Conrad’s social studies department chair and a member of the committee. “We believe that it’s important to make the change before another group of students comes in [for the next school year].”

I think for a word that is dictionary defined as offensive or a racial slur, I think that it’s time to take that out of our vocabulary as a school.
Colin Horgan, Conrad tennis team member

The school, at Jackson Avenue and Boxwood Road near the shuttered General Motors plant in Newport, opened in 1935 as Henry C. Conrad High School. It transitioned to Conrad Middle School in 1978 as part of the desegregation order for New Castle County Schools.

The school was closed from 2005-07 while undergoing more than $15 million in renovations, then reopened in 2007 as the Henry C. Conrad Schools of Science. When the school resumed competing in high school athletics, the Redskins mascot was reinstated.

But Conrad principal Mark Pruitt said the mascot has become more controversial over the years, as Native American groups and others have protested the longtime use of the Redskins nickname by the NFL franchise in Washington, D.C. Plus, over the last 20 years, many colleges and high schools nationwide have shifted away from using Native American terms as mascots.

Still, Conrad is not the lone holdover. In Buffalo, New York, on Thursday, hundreds chanted “Let’s go Redskins” in protest of a move to change the name of the mascot for the Lancaster School District, WIVB-TV reported.

According to the Retire the Mascot Committee, the number of schools and teams using Native American names and imagery has gone down from about 3,000 to 900 since 1971. Only 75 high schools continue to have Redskins as their mascot, the panel reported.

The Indians of Indian River High are the only other Native American nickname in Delaware. Claymont High School, which closed in 1990, also used the Indians mascot.

“Over the last six or seven years, I’ve fielded concerns about the mascot,” Pruitt said. “I’ve heard from parents who don’t want to join an organization called the Redskin Athletic Boosters. We had homecoming, and we got a letter from one of our opposing team’s parents saying how disgusted they were at our reenactments of Native American history. The parade and floats, those kinds of things, with headdresses and tomahawks. Those things happened more frequently as the years went on.”

A diversity committee consisting of parents, teachers and students was formed at Conrad last September to generate ideas designed to welcome all Red Clay Consolidated School District students, and move the student body toward reflecting the entire district. One of the first ideas to come out of that committee was changing the mascot.

The Retire the Mascot Committee was formed, and the group has started to work on building momentum for a change.

“I think it’s been on the back burner for a long time,” said Ana Viscarra Gikas, a member of the committee who has taught math and Spanish at Conrad since 2003. “We’re in education; we know what the term means. We know that it’s not a positive thing to have.”

Conrad’s spring sports athletes were taking full advantage of a sunny afternoon Thursday, filling the school’s fields with activity as they prepare for their upcoming seasons. The students who represent Conrad against other schools had strong feelings on the subject.

“I think it’s time for it to change,” said Colin Horgan, a junior who plays on the tennis team. “It personally doesn’t offend me, but I understand why it offends other people. I think for a word that is dictionary defined as offensive or a racial slur, I think that it’s time to take that out of our vocabulary as a school.”

The Conrad logo – a capital ‘C’ adorned by a feathered headdress – is displayed on the tennis courts and outdoor athletic fields, and in the gymnasium. But the word “Redskins” could not be seen anywhere.

“A lot of students want to keep it the same. They like the tradition that comes with it,” said Lisa Holden, a senior tennis player and member of the Retire the Mascot committee. “They like the 80-year history that we have. They like the convenience of keeping the same uniforms, the same items that we have with the mascot on it.”

But Barry Polsky, the school’s athletic director since 2007, said none of the school’s uniforms would need to be changed.

“Looking at it economically, I think the costs are going to be minimal,” Polsky said. “Because we don’t have actual ‘Redskins’ on any of our uniforms. Over the course of the last several years since we restructured the school, we’ve put Conrad on a majority of our uniforms.”

“I don’t put ‘Redskins’ on any of our shirts or anything like that,” said Matt Brainard, a guidance counselor and Conrad’s golf coach for the past five years. “I just don’t think it’s a term that we need to be using.

“You should feel good enough about your mascot to have it on your team uniforms. I just don’t feel comfortable putting it on our golf stuff, and I know most of the coaches feel the same way.”

Pruitt, the principal, wasn’t surprised that none of the school’s current athletic uniforms spell out the mascot.

“It’s subtle. I don’t know that it’s spoken, but I think a lot of them have just decided, ‘We’ll just avoid this problem and not put ‘Redskins’ on the front of a jersey.'”

Pruitt said some students who have just become aware of the controversy have asked him why anyone would be upset by the use of the mascot.

“I see right now that a lot of our students don’t have a strong opinion one way or the other on it,” the principal said. “I know one of the things that the committee is trying to do is educate the students and give them a better sense of why someone of Native American descent or from that culture would be offended.”

The issue has created a buzz in the Conrad hallways the past few days.

A lot of seniors want to be the Redskins. They want to graduate as the Redskins. But some kids definitely want it changed.
Megan Dilorio, a senior on the Conrad girls tennis team

“Everybody’s talking about it. It’s a hot topic right now,” said Megan DiIorio, a senior on the girls tennis team. “I think if it’s offending anyone, it should be changed. I think a lot of people are kind of on the fence about it, and I think they don’t really know why it offends people.

Any potential change wouldn’t come until the next school year, when a new mascot may receive a warmer reception from underclassmen.

‘A lot of back and forth’

“We’ve seen a lot of back and forth,” said Chris Kramedas, a junior who plays center field on the baseball team. “A lot of people are strongly for the Redskins, but I strongly agree that it’s time for a change. We’re excited to have a new mascot, and since we’re juniors, we’ll be the first graduating class with a new mascot.”

But a change is far from official, and it is far from being universally approved. Pruitt said the Retire the Mascot Committee has been seeking feedback through an email address – retirethemascot@gmail.com – and supporters on both sides have weighed in.

“I think the hope is to have enough support to feel comfortable making the change. It seems like there is support there. There is an interesting debate going on.”

To many, a change is overdue.

“The origin of it as a mascot is antiquated,” said Brainard, the golf coach. “That time has passed. We’re in a different time, different era now, and things are viewed and defined differently. Everybody has to be in tune with that.”

I really can’t find a reason why we should keep it. Tradition is not a good enough argument right now. Our actions, our symbols, our imagery all have to reflect good values.
Viscarra Gikas, a longtime math and Spanish teacher

Viscarra Gikas, the longtime math and Spanish teacher, sees it as a learning opportunity for the students, a chance to get involved and chart a new course going forward.

“I really can’t find a reason why we should keep it,” she said. “Tradition is not a good enough argument right now. Our actions, our symbols, our imagery all have to reflect good values.

“Hopefully, we can make it a very positive thing, have students and community and parents give us their suggestions. We can link [a new mascot] to our science or Delaware, something that is more representative of us.”

Students would be involved in selecting a new mascot, and Kramedas already has an idea.

“I like the Red Storm,” the center fielder said. “I think it’s a pretty cool name.” 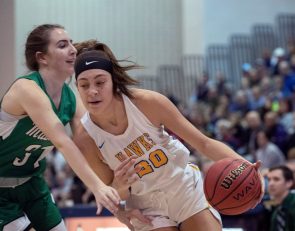