Countdown to Kickoff: Defense looks to lead Bolles in 15

Countdown to Kickoff: Defense looks to lead Bolles in 15 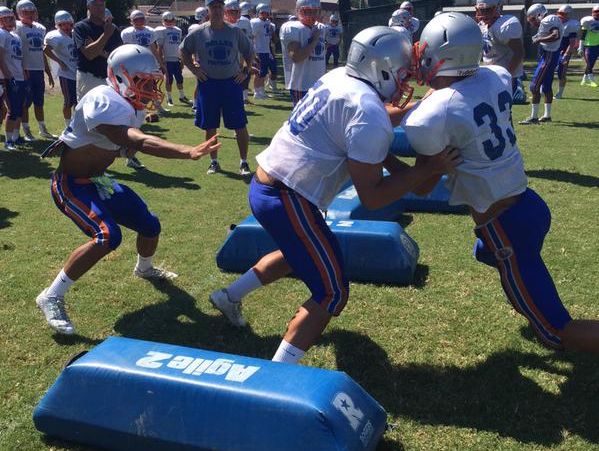 The Bolles Bulldogs enter the season with the bad taste in their mouth of losing to Booker T. Washington in the Class 4A state championship game for a third year in a row. Head coach Corky Rogers will look to the defensive side of the ball to help the Bulldogs make another run at a state championship in 2015.

JACKSONVILLE, Fla. – The Bolles Bulldogs enter 2015 with the bad taste in their mouth of losing to Booker T. Washington in the Class 4A state championship game for a third year in a row.

Now, as the Bulldogs look to make a fifth-straight trip to the state title game, they find themselves looking to replace a number of team leaders who are now playing on Saturdays in college football.

Head coach Corky Rogers’ biggest concern heading into the new season is along the offensive line. For the first time in a long time, Rogers will be without a Theus anchoring his offensive line. He’ll also be without tight end Kevin Acherman, who both contributed in the passing game and was a very good blocker in the rushing game.

However, junior guard Cody Mercer is returning and should sure up the offensive line for Rogers.

As for offensive skill positions, look no further than a two-man running attack in seniors E.J. Porter and Will Mitchell. They will be looked at to replace the play-making void left by Dexter Carter Jr.. The Bulldogs also expect big things out of senior Zack Crosby who they’ll look at to fill Acherman’s shoes at tight end.

Defense is where the experience is this year for Bolles.

A trio of seniors headline the Bulldogs’ defense throughout every level. Linebacker Kyle Johnson looks to be one of the leaders not just for the defense but for the entire team. He’s joined by defensive end Jordan Johnson and defensive back Joe King in a group of eight seniors on defense who have started together since their sophomore year.

Coach Rogers hopes that experience on the defensive side of the ball can help the Bulldogs make another run at a state championship in 2015.

The Bulldogs open the regular season August 28, when the welcome Lake Mary to Skinner-Barco Stadium.

https://usatodayhss.com/2015/countdown-to-kickoff-defense-looks-to-lead-bolles-in-15
Countdown to Kickoff: Defense looks to lead Bolles in 15
I found this story on USA TODAY High School Sports and wanted to share it with you: %link% For more high school stories, stats and videos, visit http://usatodayhss.com.