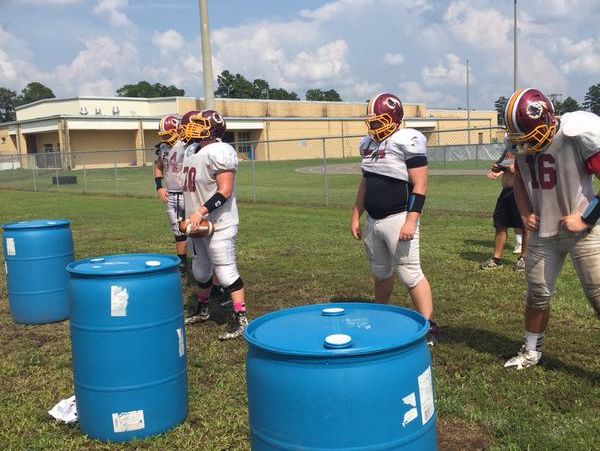 The ground game will again be the key for the Indians if they hope to challenge Bolles and Raines for a district title in 2015.

CALLAHAN, Fla. – The West Nassau Warriors are looking to catch some people underestimating them in 2015.

Head coach Rickey Armstrong, now entering his second season at the helm, coached the Indians to a 5-5 record in his first season leading the Warriors.

Now, as they enter the 2015 season, the focus of the team will be on the ground game. The Warriors return a two-headed ground attack that consists of senior running backs Davion Dubose and Brandon Jackson. Last season the two combined for 2,250 yards (Dubose 1,518, Jackson 732).

West Nassue will need a strong ground game if they hope to compete for a district title in 2015. #TeamSidelinepic.twitter.com/pJLCYASrBS

In all, the team returns four players from 2014 who averaged over five yards per carry.

The ground game will again be the key for the Indians if they hope to challenge Bolles and Raines for a district title.

West Nassau kicks off the 2015 season, Friday at 7 p.m., when they host the district rival Baldwin Indians.

https://usatodayhss.com/2015/countdown-to-kickoff-west-nassau
Countdown to Kickoff: West Nassau
I found this story on USA TODAY High School Sports and wanted to share it with you: %link% For more high school stories, stats and videos, visit http://usatodayhss.com.