LEXINGTON – When the fourth quarter started, the Covington Catholic basketball team had two starters on the bench with foul trouble and a slim two-point lead against a pesky, physical foe from Doss. Only one player on the floor had significant experience at Rupp Arena during last season’s state champion performance by the Colonels.

No matter, as unheralded players set the tone during a decisive 12-0 run in the final period, lifting the Colonels (31-5) to a 61-48 victory over the Doss Dragons (27-7) from Louisville Friday in a quarterfinal game of the 2015 Whitaker Bank/KHSAA Boys’ Sweet 16 state tournament.

Cath will play Owensboro (29-4), who knocked off Hopkinsville 71-50 earlier in the day.

“I thought that if we lost to any team, it would be a well-coached team,” said Doss head coach Blair Williams. “It would be a team that had been here before, had experience. A team that is tough by nature, a team that will fight you back. I’m not proud to lose, but I can accept losing to a tough team like that. “

To start the spurt, Cov Cath senior Bo Schuh hit a jumper in the lane over three defenders, then on a fast break, senor Andy Flood scored on a layup and converted a three-point play after being fouled to tie the game at 31. Sophomore guard Cole VonHandorf gave CCH the lead at 33-31 when he went full-speed from the backcourt straight up the middle to convert a layup.

Flood later scored on a fastbreak layup to give the Colonels a three-point lead (37-34). After Doss tied it, CCH senior guard Matthew Shumate gave the Colonels the advantage right back with a 3-pointer, his only points of the game. Layups by Tyler Jefferson and Ramon Collins returned a one-point lead to the Dragons, then Schuh tied the game at 41 by making one of two free throws.

That’s when momentum could have turned against the Colonels, as after Schuh missed his second free throw, he and Doss senior guard Dujuanta Weaver were both called for fouls after the scramble for the loose ball. Both players were assessed technical fouls as well, which left Schuh with four fouls and having to sit the bench.

Bo Schuh hits a driving lay up during the first quarter of CovCath’s quarterfinal victory over Doss in the Boys Sweet Sixteen at Rupp Arena in Lexington, Friday, March 20, 2015.

CCH junior center Will Heppler came in for Schuh and immediately hit a short jumper to stake the Colonels to a 43-41 lead as they entered the fourth period.

Doss got a free throw to start the fourth, then CCH senior point guard Cooper Theobald drove in for a layup to make it 45-42. With 5:30 to go, Heppler scored another jumper in the lane off a tough pass from VonHandorf to push the lead to five.

Weaver missed a jumper, and Heppler won a tough battle for the defensive board. On Cov Cath’s ensuing trip, VonHandorf scored a layup after a nifty crossover to make it a seven-point game with 4:41 to play. The Dragons missed their next three shots, and VonHandorf made six free throws to complete a 12-0 run, giving Cov Cath a 55-42 lead with 2:22 to play.

Heppler had four points and four rebounds in 13 minutes of action.

“I can’t believe how great he played,” Schuh said. “It’s amazing … he doesn’t play a lot of minutes, he gets in the quarterfinals of the state and somehow pulls that off. It shows the depth and the heart that our team really has.”

“There are games when Will might get a minute or two and some games where he won’t play at all,” said Cov Cath head coach Scott Ruthsatz. “We always try to get our kids mentally ready because this time of the year the mental part is bigger than the physical aspect. He’s a great kid, he knows his role and he went out and just executed.”

VonHandorf scored a game-high 17 points, 11 in the fourth period. Schuh had 13 points along with seven rebounds, three assists, three blocks and two steals. Flood and Theobald had 11 points each, and Flood added six boards as the Colonels won that battle, 38-27.

Doss had its lowest scoring output of the season and shot just 34.6 percent for the game (18-of-52).

“We just ran our sets, we handled their pressure for the most part and we rebounded,” Ruthsatz said. “We had some big guys step up when we got into foul trouble. We executed offensively the way we wanted to.”

A key part was the Colonels switching to a zone defense in the second half after the Dragons continually hurt them with dribble-penetration led by Weaver, who notched his fifth assist midway through the third quarter but did not pick up another one the rest of the way.

“They were so good getting into the lane in the first half,” Ruthsatz said. “We knew that was an issue so what we did was take our chances on them hitting perimeter jump shots. Once you do that, you have to rebound the ball and I thought we did a nice job of rebounding and getting out in transition and getting some easy buckets.”

The Dragons came in averaging nearly seven 3-point makes a game but only had four Friday on 21 attempts. Doss only made 1-of-12 shots overall in the fourth quarter.

“I felt like we were getting good shots, but the way that they contest shots is a little bit different than most other teams,” Williams said. “They know we can shoot. Every time we had a shot and flicked our wrists, they had a hand right there or above our hand, which made it tougher than normal to hit the shots we normally make.”

With VonHandorf off his game offensively after scoring 29 points in the first round but struggling from the floor Friday, several Colonels had to step up. Most of them newcomers to the rotation.

“It shows how much hard work in the summer helps you,” Flood said. “We’ve played at NKU, which is not quite as big, but it gets us used to this. It’s not a big deal.”

Owensboro’s size will present a challenge to the Colonels, Ruthsatz said. The Red Devils play a variety of defense, the Colonels coach said, and will try to keep Cov Cath off balance. Aric Holman, Justin Miller and Darion Morrow average between 14 and 17 points a game.

No team has repeated as boys’ state champion since Fairdale in 1990 and 1991. 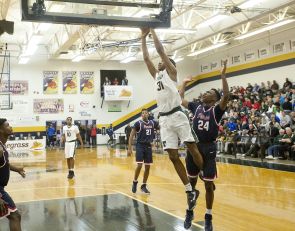 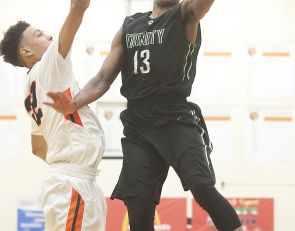 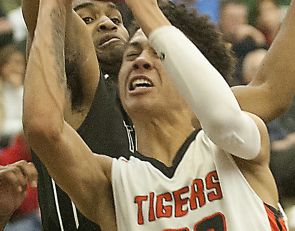 https://usatodayhss.com/2015/cov-cath-reserves-push-colonels-past-doss
Reserves push CovCath past Doss
I found this story on USA TODAY High School Sports and wanted to share it with you: %link% For more high school stories, stats and videos, visit http://usatodayhss.com.