CVU celebrates its victory over Burr and Burton in the Division I girls soccer championship at Burlington High School on Saturday.

Hard-to-stomach defeats against Burr and Burton Academy — snapping a four-year, 48-game winning streak — and Colchester cast the perennial contenders as mortals after all. Perhaps most importantly, though, the setbacks armed the Redhawks with a new purpose.

“You work really, really hard every day and don’t let the name CVU entitle you to anything,” said senior goalkeeper Michaela Flore. “From that point on, we went to practice harder, we went to every game thinking we needed to remind people why they all think CVU is invincible.”

Given the chance to repay the favor, No. 3 Champlain Valley managed to do just that, bossing the first half and handling the second to upend top-seeded BBA for a 2-1 victory in the Division I final on Saturday at Buck Hard Field.

And the Redhawks continue to hit new heights with their 16th state title: The triumph over the previously unbeaten Bulldogs made CVU the first program to capture five straight D-I championships.

“It’s incredible. We actually never talked about the five-in-a-row thing until last night — that was the first time it was brought up all season and I brought it up at the end of practice,” said Stan Williams, who has coached CVU to the past three crowns. “It was not just their chance to put a stamp for this team, but a chance to make some history.”

Unlike the last two crowns, each capping a perfect season, the most recent one has its own distinct flavor: Revenge.

The shock of those regular-season losses allowed the Redhawks (15-2) to prove their true worth in the semifinals, a pulsating comeback win over the Lakers, and the title game.

“I’d be lying if I said that didn’t knock us down a few pegs. We definitely woke back up and didn’t soar so high,” CVU senior Lia Gagliuso said. “But it makes it that much sweeter to beat the two teams that beat us because we know we deserve it.”

Blitzing the Bulldogs (17-1) from the start, Champlain Valley made certain they dictated the first half with their pressure across the field –– anything and everything to avoid a repeat of the teams’ regular-season meeting.

“They came at us,” BBA coach Suzanne Mears said. “We knew they were going to, but they are a very deserving team and they are obviously the toughest team we’ve this season, more so than we saw before.

“They came at us from every angle, executed every inch, and they wanted it.”

Megan Gannon cemented that effect with the game’s opening tally, her team-leading 13th of the year, in the 15th minute.

Cutting out a short goal kick, the senior settled the ball with a touch and cracked a half-volley from the top of the penalty area. The driven effort looped over BBA goalie Ana Garay (eight saves) high into the left side of the net.

“It came, hit my foot, took one bounce and I just hit it,” Gannon said.

Burr & Burton’s Una Langran walks away as CVU celebrates a goal in the Division I girls soccer championship in Burlington on Saturday, October 31, 2015.

With the speed of Gannon and outside midfielders Sierra Morton and Ali Bisaccia wreaking havoc in the attacking third, CVU doubled its lead on a free kick in the 28th minute.

Gagliuso, a capable long-distance specialist, opted to drive a ball across the goal toward the left post from 30-plus yards out. The service sailed just past Garay’s leaping attempt to punch it wide and allowed Catherine Cazayoux to crash the far post for the header and 2-0 lead.

“I was a little conflicted. It was like, ‘This is a little farther out than I’d like so I’m just going to aim it more towards there,’” Gagliuso said. “Catherine was there.”

The one-sided first-half came to a close 20 seconds after Burr and Burton registered its only shot on goal of the period, a downward header by Alison Leiter that Flore (two saves) snared easily.

“We were so caught up — I don’t know if it was the nerves, the pressure, whatever it was — and there’s no excuses,” Mears said. “They came out and they were just a step ahead of us for everything. They were just that much quicker and beat us to every single ball in that first half.”

CVU nearly stretched the lead to 3-0 inside the first minute of the second half, but Morton’s hard shot from the right side flashed wide across goal.

Instead, the third goal went to the Bulldogs via a 50th-minute penalty kick. When the Redhawks were judged to have handled a BBA free kick in the box, Bella Dworkin stepped to the spot and buried her chance in the left side of the net.

The contest opened up from there, end-to-end action with quality chances for both sides, but CVU’s midfield and back line never budged. Time and again over the final 15 minutes, the Redhawks had the right step at the right time to cut out any danger.

“They’ve saved my butt more times than I can count,” Flore said. “They capitalize under pressure. That’s when they play their best, when it matters, because they know they can.”

Flore, too, earned her share of credit, snatching up every ball she got her hands on in the Redhawks’ final two games as they took out undefeated teams in succession.

“No kid has worked harder to maximize her talents that I’ve ever had in any sport, any team,” Williams said. “For her to then play her two best two games ever in these two biggest games, that’s just awesome.”

The championship also vaults four-year varsity players Gannon and Cazayoux into the exclusive club of four-time champions –– albeit with a twist the rest can’t match.

“I’m just so proud and thankful of this team and all the teams that came before it,” Gannon said. “It’s pretty crazy. It’s pretty cool making history, for sure.” 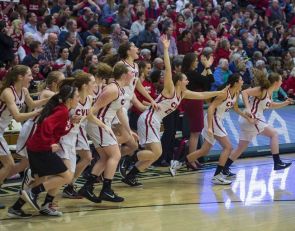 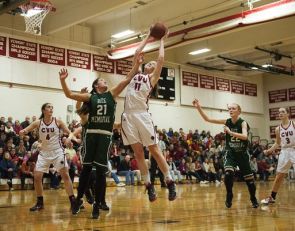 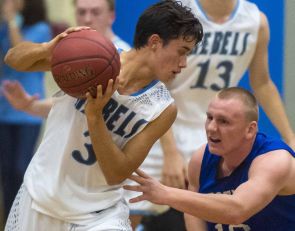