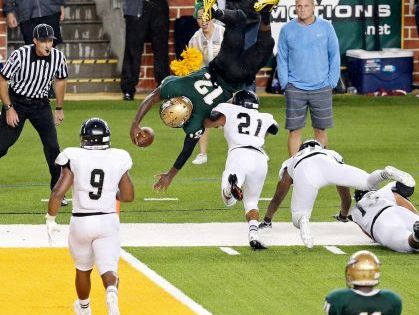 Jaylin Nelson (No. 12) was rules ineligible after to transferring to Duncanville from DeSoto.

Former DeSoto quarterback Jaylin Nelson was ruled ineligible for the the upcoming seasons after a district committee voted unanimously Monday morning that Nelson transferred to Duncanville “for athletic purposes.” The decision can be appealed to the UIL.

Nelson is the second transfer to Duncanville from DeSoto to be ruled ineligible. Earlier, rising junior linebacker/running back Matthew Siggers was declared ineligible. Nelson’s was the highest profile transfer to be heard by a committee of district principals. Several other transfers have cleared early administrative hurdles such as Tennessee commit defensive back Bailey Phillips to Duncanville and highly regarded senior running back Kaegun Williams to Cedar Hill from Stephenville and receiver Christian Rambo to Cedar Hill from Woodrow Wilson.

After testimony from Nelson, his parents and multiple DeSoto football coaches, the District 8-6A Executive Committee voted 5-0 to make him ineligible. Students transferring among schools is not uncommon (Transfer Talk), but Nelson was a highly successful backup quarterback at DeSoto last season who had a prominent role while Ohio State commit Tristen Wallace was injured for nine weeks.

Nelson departed the DeSoto baseball team in March and enrolled at Duncanville in time to participate in spring practice. Nelson is competing for the starting quarterback position in Duncanville and split time with 6-2 senior Michael Meyers. The 5-11 Nelson is considered a college prospect at receiver but Nelson quarterbacked First Baptist to a TAPPS state title as a freshman before enrolling at DeSoto. Nelson played receiver at DeSoto until Wallace broke his leg in last year’s second game.

Unless, Nelson receives an appeal, he would have to sit out a calendar year to establish residency. Nelson could be eligible depending on individual school admission at TAPPS and SPC private schools.