Eastside’s Darius Foster drives down the lane while defended by Berea’s Ta’mious Young during the Eagles’ 65-62 win in the Greenville County Tip-Off Tournament championship game Wednesday at Eastside.

The ones that matter most come later, but the Eagles did win a championship Wednesday, defeating Berea 65-62 to win the Greenville County Tip-Off Tournament at Eastside.

The Eagles led 50-32 late in the third quarter, but Dorian Hashim led a fourth-quarter rally for the Bulldogs, scoring eight of his 20 points in the period.

Berea’s Zay Ballenger hit a pull-up shot in the lane with 23 seconds left to tie the score at 62-62. Deshundre Rucker, who led Eastside with 15 points, then grabbed a long outlet pass and put the Eagles (3-0) back on top.

After Rucker made a block at the other end, he was fouled and made one of two free throws with 6.3 seconds left.

That gave Berea (2-1) one more chance, but Hashim’s 3-point attempt from the left corner bounced out at the buzzer.

“We know what we’ve got to work on, which is how to close games out,” Chamness said. “When other teams are applying pressure because of the crunch, we’ve got to do a better job of not letting them back in the game. I guess until you’re in that situation, it’s hard to simulate that in practice.”

Eastside’s Tyius Lewis battled foul trouble, but when Berea began closing the gap in the fourth quarter, Lewis scored six of his eight points. Then he picked up his fifth foul with 2:13 remaining.

“Tyius getting in foul trouble and fouling out did not help the cause at all,” Chamness said. “He would have been in there under normal circumstances. Having said that, you’ve got to be ready when your name’s called.”

Chamness called plenty of names over the course of three days. He used 12 players in the first half Wednesday, and he expects to use a lot of players on a nightly basis.

“We believe one of our strengths is our depth,” he said. “You put that — I even hesitate to call them that second group — that next group in, and there’s a lot of kids that can make things happen.”

Kris White scored all 21 of his points in the second half for Riverside (1-2), which trailed 11-2 after one quarter and 19-6 at halftime. 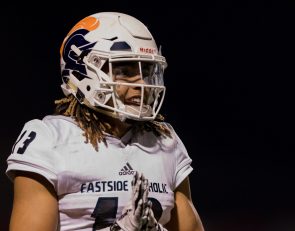 What We Learned: No. 14 Eastside Catholic (Wash.) holds off Pinnacle (Ariz.) rally 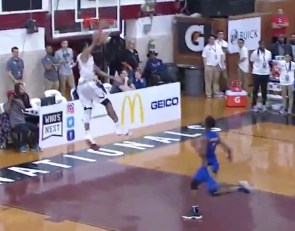