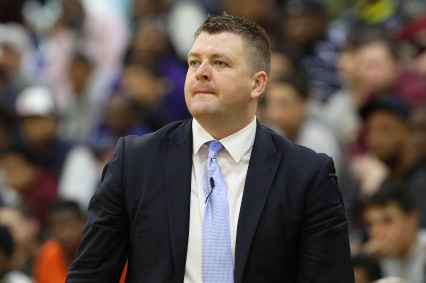 Findlay Prep (Henderson, Nev.) is no stranger to the top spot in the Super 25 boys basketball rankings. Just as recently as last January, the Pilots were in the top spot.

But it’s been a while since Findlay Prep finished the season as the No. 1 team, so forgive coach Andy Johnson if he doesn’t get too excited about seeing his team in the top spot in the 2015 preseason boys basketball rankings.

“Our goal is always to be the No. 1 team at the end of the season,” Johnson said. “I’ve been really impressed with our guys’ chemistry. That’s the strongest point so far, is how quickly they’ve jelled. Another thing that has stood out for me is our depth.”

“They’ve both impressed me with their leadership,” Johnson said. “That goes back to our depth, which gives our players a great opportunity to push each other.”

Findlay Prep has only existed since the 2006-2007 season, yet sent 46 players to Division I colleges and 10 players to the NBA.

Montverde Academy (Montverde, Fla.), which finished the past two seasons as the No. 1 team, starts the year at No. 2 with former star Ben Simmons now at Louisiana State. The No. 3 team is Oak Hill Academy (Mouth of Wilson, Va.), which has a deep squad but lost American Family Insurance All-USA forward Harry Giles to a knee injury, perhaps for the season.

Hillcrest Prep in Phoenix drew national headlines this offseason when its new program added No. 1 2017 overall recruit DeAndre Ayton and No. 1 overall 2018 overall recruit Marvin Bagley. Hillcrest Prep is not eligible for consideration in the Super 25 rankings because it is not a member of a state association and does not play enough of its games against traditional varsity high school opponents.

In all, 17 states and the District of Columbia are represented. California leads with three team with two each from Nevada, Virginia, Texas, North Carolina and Georgia.

Of the final top 10 from last year, seven appear in the preseason rankings this year. The three others are No. 3 Callaway (Jackson, Miss.), which lost Malik Newman to Mississippi State; No. 4 Blanche Ely (Pompano Beach, Fla.), which had significant roster turnover; and No. 7 Bishop O’Dowd (Oakland), which lost Ivan Raab to Cal.