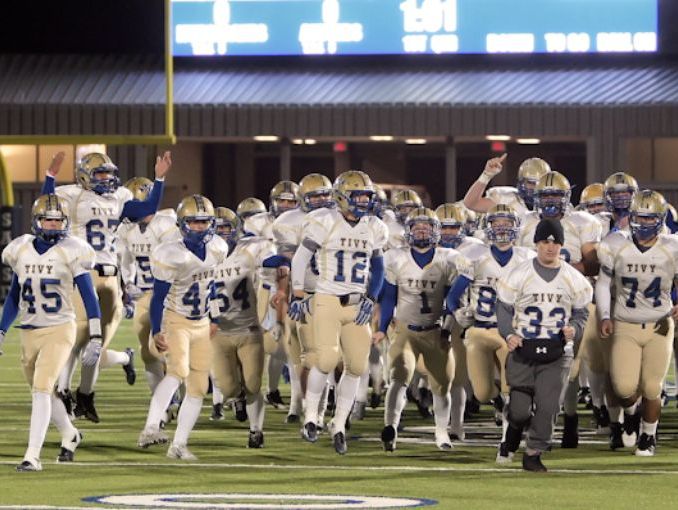 The Kerrville Tivy Antlers, taking the field against Sam Houston in the first round of last year’s playoffs, advanced to the Class 5A Division II state quarterfinals.

Predicting the District 27-5A race

Outlook: After advancing to the second round of the playoffs in its first two seasons under Jones, Tivy made it all the way to the state quarterfinals last year before falling to Cedar Park. With prolific quarterback Cade Dyal among seven offensive starters returning, the Antlers will have no trouble moving the ball. Dyan completed 261 of 402 passes, with 12 interceptions, for 3,765 yards and 42 touchdowns last season. Ace receivers Hutch White (79-1,172 yards, 15 TDs), Carson McCoy (38-968, 12 TDs) and Tres White (19-309, 3 TDs) are also back. Running back Hayden Schreckenbach rushed for 545 yards as a sophomore last season. The defensive leaders are linebackers Cameron Melcher (155 tackles) and John Lampson and safety Preston Dimery, who had 111 tackles and four interceptions last year. Tivy, the alma mater of 2012 Heisman Trophy winner Johnny Manziel, has advanced to the playoffs each of the past 17 seasons.

Outlook: Champion went through the district unscathed last year in its second season under former MacArthur quarterback Keith Kaiser. The Chargers probably won’t match last year’s run in 27-5A play, but they still have enough talent to go a few rounds in the playoffs. Quarterback Josh Green passed for 653 yards and 11 touchdowns in three starters last year, and is expected to be one of the district’s top players as a senior. Wide receiver Theisson Brooks, who had 26 receptions for 318 yards and three TDs last season, is also back. Center Jeremy Struck and lineman Monty Smith will do the heavy lifting up front. Led by linebacker Trey Moskal (five sacks), and backs Charles Shipp, Isaac Murdock and Kaden Beavers, the defense will be stout again. Beavers was the district’s newcomer of the year last season.

Outlook: Senior Jack Woodland faces the challenge of replacing quarterback Dalton Banks, last year’s 27-5A MVP and now at Ivy League school Cornell. Woodland completed 15 of 19 passes for 169 yards and one touchdown last year. He will get help from running back Deryl Reynolds (590 yards rushing, 6 touchdowns), wide receiver Preston Taylor, center Benji Cohen and guard/tackle Duncan Bartlett (6-4, 270). The defense will be bolstered by tackles Stone Tarver and Brandon Peterson and back Holden Daun, who had three interceptions last year. The Mules, who have gone 27-10 in three seasons under Coach Mike Norment, have made the playoffs 14 of the past 15 seasons, including the last 12 in a row.

Outlook: San Marcos is starting its fourth season under former Judson player and assistant coach Mark Soto, who has the Rattlers moving in the right direction. San Marcos finished 4-6 overall for the second year in a row, but won two more district games than it did the previous season. San Marcos finally has its own stadium and the upgrade in facilities has done wonders to spark renewed interest in the Rattlers’ program. Dual-threat quarterback David Hamilton will put people in the stands. Hamilton completed 101 of 175 passes, with no interceptions, for 1,000 yards and six touchdowns and rushed for 2,000 yards and 22 TDs last year. Also back is Cavion Garner, who rushed for 745 yards and seven TDs as a sophomore. Tackle A.J. Bosquez will anchor the offensive line. The defense will be led by linebackers Joseph Wilburn and Cory Mathis, safety Austin Castillo and cornerback Zed Horton.

Outlook: The dynamic duo of quarterback Koby Wilkerson and running back Alex Mermea, both three-year starters who earned all-district honors last year, is back to lead Floresville. Wilkerson was outstanding as a junior, completing 70 of 128 passes, with only two interceptions, for 892 yards and six touchdowns and rushing for 1,537 yards and 22 TDs. A senior, Mermea rushed for 1,228 yards and 14 TDs last year. The offensive line returns Josh Roberts, Abundio Banda and Colby Bauer. Players to watch on defense are linemen George Lockamy and Brandon Ochoa (three sacks), linebacker Matthew Trevino and back Aaron Rodriguez.

Last playoff appearance: 2014, lost to Austin Vandergrift 42-13 in 5A Division I second round

Outlook: Lockhart has some holes to plug on its offensive line but still has Joel Ortiz, a three-year starter, and Cesar Briseno to block for running back D.J. Ellison, who rushed for 1,234 yards and 10 touchdowns last year. Stephon Houston, who averaged nine yards a carry as a sophomore, is a big-play running back. The Lions’ defensive standouts are safety Logan Clinger, linebacker Andy Dorado and lineman Logan Altier.

Outlook: Seguin is starting its second season under Anthony Boykin, who was offensive coordinator at San Marcos before taking over the Matadors’ program. Seguin has recorded eight consecutive losing seasons since finishing 9-2 in 2006, but the Matadors are making headway under Boykin. They won three district games last year after going winless in league play in 2013, and the improvement should continue this season. Matt Garcia will start at quarterback after playing fullback last season. Avion Dora, who rushed for 662 yards and eight touchdowns last year, is back to fuel the running game. Another offensive standout is 6-6 wide receiver Brock Gerlich, who had four TD receptions as a junior. Free safety Trever Kilcrease (five interceptions) and strong safety Benito Herrera (three interceptions) are the defensive aces. Outside linebacker Tyler Villegas also will help spearhead the defense.

Outlook: After winning three games in 2013, Memorial failed to crack the victory column last year in its third season under Coach Alex Guerra. Although the Minutemen have finished below .500 in 19 of the past 20 seasons – they finished 5-5 in 1996 – Guerra remains optimistic about Memorial’s chances of climbing out of the district cellar. The Minutemen return only 10 lettermen, but they have some quality players who could be among the best in the district this season. Wide receiver Greg Rosemond, who had 20 receptions for 471 yards and three touchdowns last year, and defensive end Joshua Pitts (6-6, 245) are the best players on the roster. Robert Soto and Ben Arriaga are back to anchor the offensive line. Linebacker David Ortiz and safety Alex Arceo will help Pitts lead the defense. Punter Jonathan Padilla earned all-district honors last season.

Coach: Michael Inco, 1-9 in one season at Kennedy

Outlook: Kennedy barely escaped the district cellar in Mike Inco’s first season as head coach last year, beating rival Memorial in its finale for its only victory. The return of senior quarterback Eric Lira, who has started since he was a sophomore, gives the Rockets good reason to feel optimistic about their chances of moving the ball this season. Lira passed for 900 yards and four touchdowns last year. Wide receiver Jose Flores, who had four TD catches as a junior, and running back Dominic Franco (425 yards, 5 TDs) are also back. Center Nic Nunez is the leader of the offensive line. Lineman Noe Garcia (four sacks), and backs Fabian Del Toro (four interceptions) and David Austin will be counted on to rally the defense.

Predicting the District 27-5A race