Football District 28-6A: East Central gets nod over C.C. Carroll

Football District 28-6A: East Central gets nod over C.C. Carroll 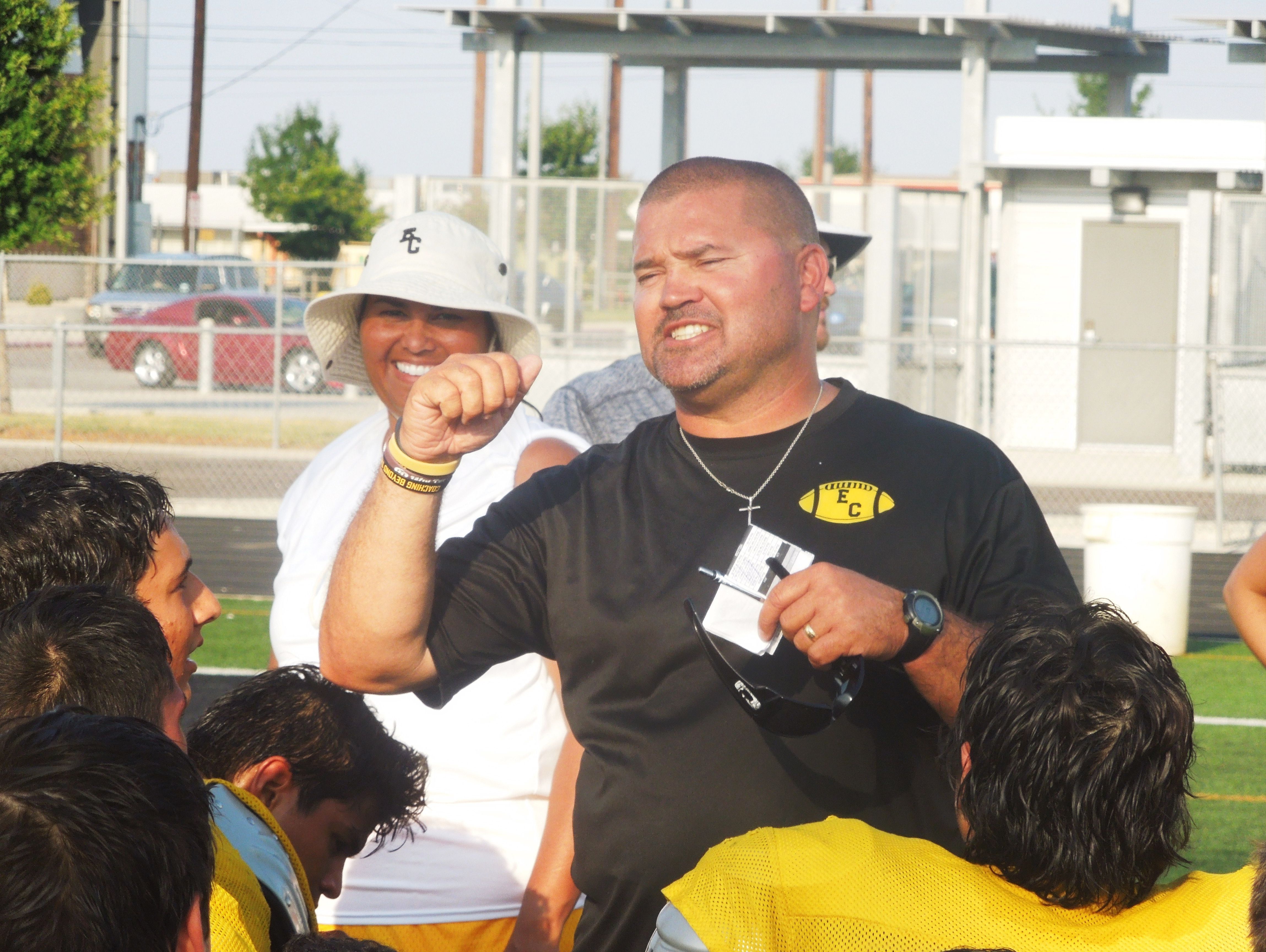 Clint Hartman, a 1993 East Central graduate, guided the Hornets to a share of the District 28-6A title in his second season at his alma mater last year.

Predicting the District 28-6A race

Last playoff appearance: 2014, lost to Stevens 51-22 in 6A Division I bidistrict

Outlook: East Central has the talent and experience to make some noise in the playoffs. With all-district quarterback Justin Upshaw-Mendoza and all-district wide receiver Kyle Lamey among the cast of returning starters, the Hornets will have one of the best offenses in the San Antonio area. Upshaw-Mendoza was outstanding last year, completing 140 of 239 passes, with only five interceptions, for 2,199 yards and 21 touchdowns. A two-time all-district pick, Lamey finished his junior season with 31 receptions for 601 yards and seven TDs. Running back Jauwan Hall, the district’s newcomer of the year as a sophomore last season after rushing for 1,026 yards and 11 TDs, gives Coach Clint Hartman another offensive option. Isidro Diaz (6-3, 285) and Juan Trevino will anchor the offensive line. The Hornets’ defense is also loaded. The unit will be led by linebacker Dalton Tarr, last year’s 28-6A Defensive MVP after finishing with 114 tackles and four interceptions. Other top defensive hands are back Dairyon Smith, who had four interceptions last season and was named the district’s newcomer of the year as a sophomore, and back Roy Moya (four interceptions, two blocked kicks). East Central has advanced to the playoffs each of the past six seasons and won or shared three district titles during that span.

Outlook: Carroll finally broke through in its fourth season under Coach Tony Trevino last year, finishing 9-2 after three consecutive losing campaigns and earning a share of the 28-6A title. With the dynamic duo of running back Noah Lisk and quarterback Jesse Jones returning, the Tigers should have one of the most explosive offenses in South Texas. Lisk had a stellar junior season, earning All-State honors after racking up 1,946 all-purpose yards and scoring 28 touchdowns. The 28-6A MVP, Lisk averaged 170 yards per game and 7.8 yards per rush. Jones also earned All-State honors and was named 28-6A Offensive MVP after throwing for 1,613 yards and 18 TDs and running for 798 yards and 13 TDs. All-State pick Tres Perez (6-1, 267) and Hunter Bowers (6-4, 302) will anchor the offensive line. Lineman Eric Ramirez is one of the standouts on defense.

Outlook: King won seven games last year after a two-win season in 2013. Led by dual-threat quarterback Spencer Manuel, the Mustangs will build on last year’s success to challenge East Central and Carroll in the 28-6A race. Manuel was solid as a junior last season, passing for 18 touchdowns and a school-record 1,120 yards and rushing for 312 yards and two TDs. Wide receiver Holey Thompson (five TDs) is also back. Bobby Gonzalez, who saw action as a sophomore, will anchor the offensive line. Linebacker Jordan Allen, linebacker Rodney Taylor and tackle Jasper Stafford (six sacks) are the headliners on defense.

Outlook: Led by running back Tyrone Middleton and a solid offensive line, Southwest will extend its streak of playoff appearances to nine seasons this year. Coach Pete Wagner has high expectations of Middleton, who rushed for 769 yards and seven touchdowns last year. The best of the offensive linemen is Manuel Valles (6-2, 283). He’ll get help on the line from Oscar Patino, Anthony Gonzales and Miguel Leal. End Jacob Fey, a unanimous all-district pick after finishing with six sacks last year, heads the Dragons’ defense. Linebackers Jose Bautista and John Garcia, who played as sophomores, are two other defensive standouts.

Last playoff appearance: 2013, lost to Rio Grande City 48-40 in 4A Division I bidistrict

Outlook: Craig Charlton was hired in late April to succeed Cody Simper, who left Ray after five seasons to take the head-coaching job at newly opened Corpus Christi Veterans Memorial High School. The Texans went 30-24 and made the playoffs three times under Simper. Offensive coordinator at Del Valle last year, Charlton inherits a team that went 6-4 overall but won just one game in 28-6A play. The return of 24 lettermen, including 10 who have been on the varsity for three seasons, should help make Charlton’s transition to his new job a little easier. Nam Dimas is a three-year on the offensive and defensive lines, and lineman Jacob Garcia was also a two-way starter last season. Linebacker Roland Villanueva, another three-year starter, and safety Nicholas Ficenec will help spearhead the defense. Matthew Moffitt, Randall Harris and Isaiah Shamoun will vie for the starting spot at quarterback.

Last playoff appearance: 2007, lost to Gregory-Portland 41-14 in 4A Division I bidistrict

Outlook: Louis James moved from Southwest to South San in March to succeed Marcus Booker, who went 6-24 in three seasons with the Bobcats. South San went 2-8 overall and 0-5 in district each year under Booker, a former Judson standout. James was offensive coordinator at Southwest, a district rival of South San, the previous two seasons. He faces a formidable challenge with the Bobcats, who have missed the playoffs each of the past seven seasons and haven’t won a district game since Oct. 29, 2010. Tailback Justin Acosta, who rushed for 545 yards last year, and wide receiver Darius Prescott are two reliable offensive players. Mark Garcia is one of the better defensive players on the squad.

Predicting the District 28-6A race