Football: Red Bank has been on a long journey

Football: Red Bank has been on a long journey

Nick Giglio never doubted he was doing things the right way while he was trying to build the program at Red Bank Regional back to where it was in the 1970’s under head coaches Bob Strangia and Lou Vircillo.

But, even he wondered at times when the Bucs would finally turn the corner. He remembers all the talks he had with his teams after losses during his first six seasons at Red Bank, hoping his players were listening to the message and learning from what went wrong.

“After a while, you start saying to yourself, ‘How many more of these talks do I have to give? Are we doing it the right way? Is there something different we should be doing?’ ” Giglio said. “Without those talks, this would have never happened.”

“This” is a season that has brought back memories and rivaled Red Bank’s “Impossible Dream” season of 1975 when the Bucs defeated Hightstown, 46-44, in a memorable NJSIAA Central Group II championship game, finished that season 11-0, extended their winning streak at that time to 28 and won the only sectional championship in the program’s history.

Red Bank, which had not had a winning season since 2003 and was just 21-39 in Giglio’s first six seasons, has been the surprise team of the Shore Conference this season. The Bucs are 11-0 headed into the NJSIAA Central Group III championship game against Rumson-Fair Haven (9-2) Saturday at 7 p.m. at Rutgers University’s High Point Solutions Stadium.

What has brought “this” about is a very talented senior class – led by wide receiver/running back/defensive back Sadiq Palmer. Eight of those seniors played as sophomores when the Bucs went 1-9.

“We knew this group had it in them,” Giglio said. “It was just a matter of if the light bulb was going to go off. Sometimes, it never does, but these guys ended up doing it. because they bought into their roles and gained confidence through hard work. Confidence is a great thing. They feel good about themselves and that’s a big factor in how they play on the field now.”

Giglio said he also changed up the summer training regimen and tried to simplify things for the players.

“We concentrated on fundamentals and tackling and blocking,” Giglio said. “We needed to do something different. We were sick of the double overtime losses, missing the playoffs by two points (which happened to Red Bank in 2014). We had to change how we got to our vision.”

“In Week 4 and Week 5, attendance was still up,” Giglio said. “That’s when we thought we might have something.”

What also helped the Bucs in their preseason preparations was depth. Giglio said there was competition for most starting positions throughout summer training camp.

“It made our practice tempo better and it made everybody work harder. It showed no one was guaranteed a spot,” Giglio said.

But, still Red Bank needed a big win or two to show it had what it took to win championships.

Those wins came in weeks 3 and 6 when they won at Ocean and rallied at home to defeat Red Bank Catholic for its first win over the Caseys since 2004.

“When I saw the level of our play in the first Ocean game increase even more (Red Bank also defeated Ocean in a Central Group III semifinal) and the enthusiasm in which our kids played with, the fun they were having out there and the confidence they showed, I thought we may have something special.”

However, there is one huge obstacle standing in Red Bank’s way of an unbeaten season in its Ridge Road rival Rumson-Fair Haven. The two schools are located about two miles apart on Ridge Road which goes through Little Silver, Fair Haven and Rumson.

“I said this when we beat RBC, and I’ll say this about Rumson, that’s a program we want to be like – a consistent winner,” Giglio said. “It’s amazing what Rumson has done. We respect them because of that. They are a true program.”

A win over Rumson would complete what has been an amazing ride for Red Bank.

Talented senior wide receiver/running back/defensive back Sadiq Palmer (No. 6) has been a major reason .Red Bank Regional has been the Shore Conference’s surprise team this season.

Red Bank Regional senior quarterback Jack Navitsky, shown breaking away for the winning touchdown in the Bucs’ win over Red Bank Catholic on Oct. 16, has been among the team leaders for Red Bank during its magical season. 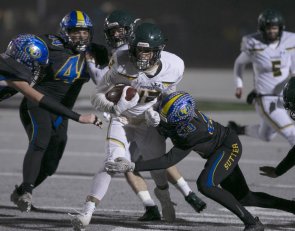 https://usatodayhss.com/2015/football-red-bank-has-been-on-a-long-journey
Football: Red Bank has been on a long journey
I found this story on USA TODAY High School Sports and wanted to share it with you: %link% For more high school stories, stats and videos, visit http://usatodayhss.com.