How ’bout those Lil’ Devils.

They mature, eat their veggies, get after it in the weight room, study film and — Voila! — they’re Big Devils thumping once again on state football supremacy’s door.

That’s how it goes out back of 1 Gordon Drive, home of championship-chasers unparalleled in New York high school football.

Chenango Forks will, at or about 6 p.m. Friday in the Carrier Dome, align for kickoff in the program’s state-record ninth state-championship appearance seeking a third successive Class C title.

For the ninth time in a 15-season span, the Blue Devils dress for Week 13 competition.

K. Frank Green was the architect of this one. D. Francis Hogan was tossed the keys in 2008 and has overseen its continued distinction.

Chenango Forks has rung up a 164-17 record from 2001 to the present— and roll that around the mouth a time or two.

The Witches of Greenwich High, unbeaten Section 2 champions from Washington County, stand between Forks and state title No. 5, which would pull the Devils even with Maine-Endwell and Randolph for second-best back of Rochester’s Aquinas Institute. Aquinas will shoot for a seventh on Sunday.

Call it a culture of superiority, hip-high tykes idolizing high school lads and bent on one day replicating their heroes’ success.

“Everyone who was playing in the Dome, they were our heroes. We looked up to them, we even gave them our own nicknames,” said Tony Silvanic, senior quarterback/linebacker, recalling his days as a wide-eyed child. “Now, being those players, it’s just so special. It’s surreal, you just can’t believe that time has passed that fast.

“You go from looking up to those guys to being those guys, it puts a set of responsibilities on your shoulders to do well both on and off the field.”

“It’s pretty nostalgic, to be honest,” said Dylan Studer, another senior who had a hand in the last two state titles. “Back when I was a little kid like them, I never thought time would fly this fast and I’d be up here wearing Forks across my chest. It means a lot to us, setting an example for those kids just like the kids before us did.”

Three-peat potential similarly awaits another trio of Devils. For senior Cody Lamond, it’s the last go-round. For 11th-graders L.J. Watson and Ryan Ehrets, there is Friday plus another season.

The 2012 setback was dealt by Hornell in a state semifinal. The next year, Tioga was a 7-0 winner in a Week 2 contest for the ages. Last season and this one, Maine-Endwell was the lone Forks-buster.

Combined records of those teams to best the Devils: 47-3.

Two of the last 15 seasons Forks has fallen short of a Section 4 championship. Twelve times the Devils have reached the final four of state playoffs, and their 25 state-playoff victories top New York’s charts.

And so, a couple of the fellas were asked: Could a Chenango Forks football season be successful if the final game was played outdoors?

“Yes, it can, but obviously our main goal is always to make it all the way,” Lamond said. “A lot of other teams would be really happy to make it to the semifinals or the quarterfinals, but we always strive for greatness. That’s our goal every year.”

The present season has brought 11 victories, a 28-21 loss to Maine-Endwell in Week 2, a plus-275 point differential and … well … that traditional pasta lunch served up by players’ Moms after practice Wednesday. “Choch” and his linemates salivated leading to that feast.

And so while all but one other Section 4 squad is left to view championship weekend on television, Forks will have yet another go at the top prize.

The Blue Devils figure to play disciplined football, as per usual. They’ll accentuate the run, pass when prudent, defend as if desperate to do so on every down, cover kicks and punts with abandon and return them efficiently.

While the rest watch, if they choose.

So, Cody, ever imagine being one of those having wrapped up a football season, say, a month ago?

“Us three (Silvanic and Studer included) have had great leaders come before us so we’ve been looking up to them and now we have to be that.” 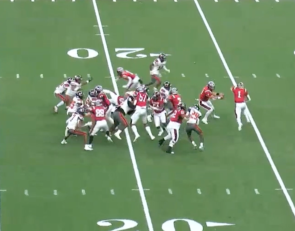 NFHS Network football recap: 10 of the best highlights of 2022

Blue Devils hand off excellence down the ladder.