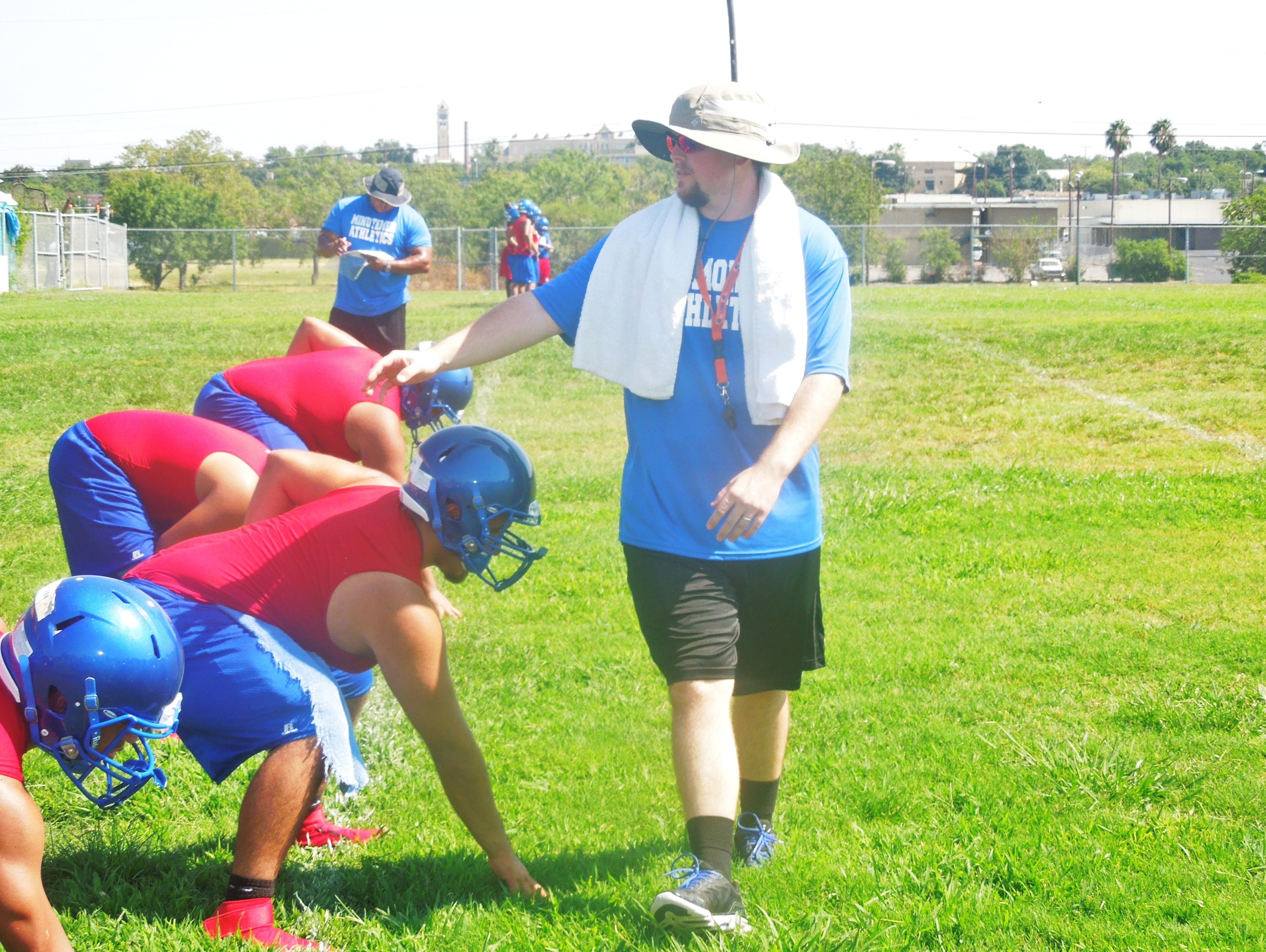 Former UTSA center Nate Leonard, working with his offensive lineman during practice Monday, started all 46 games for the Roadrunners in their first four seasons.

Hired in June by Minutemen coach Alex Guerra, Leonard has taken on his job with the same zeal that defined him as a four-year starting center at UTSA. While his former teammates completed their first workout of the preseason Monday morning, Leonard worked in the scorching sun past noon on a practice field across the street from the Memorial campus.

“I’m enjoying it,” Leonard said. “I got to know the kids after I started helping out with the strength and conditioning program this summer. I’m excited about this opportunity.”

Leonard, who grew up in McKinney near Dallas, was a member of UTSA’s first signing class in 2010 and completed his career last year as the only player to start all 46 games in the Roadrunners’ first four seasons.

A team leader from the get-go, Leonard was also one of UTSA’s most colorful, engaging players. He often wore bow ties to interview sessions with the media on the Roadrunners’ off days, and always could be counted on to give thoughtful, detailed answers to questions.

Leonard even wrote a blog about UTSA football for the Huffington Post during the Roadrunners’ second season in 2012 and continued it for the UTSA athletic department’s website, goutsa.com.

But that was then and this is now. Leonard, who turns 24 next Monday, made it clear he’s turned the page and is eager to move forward with his life. 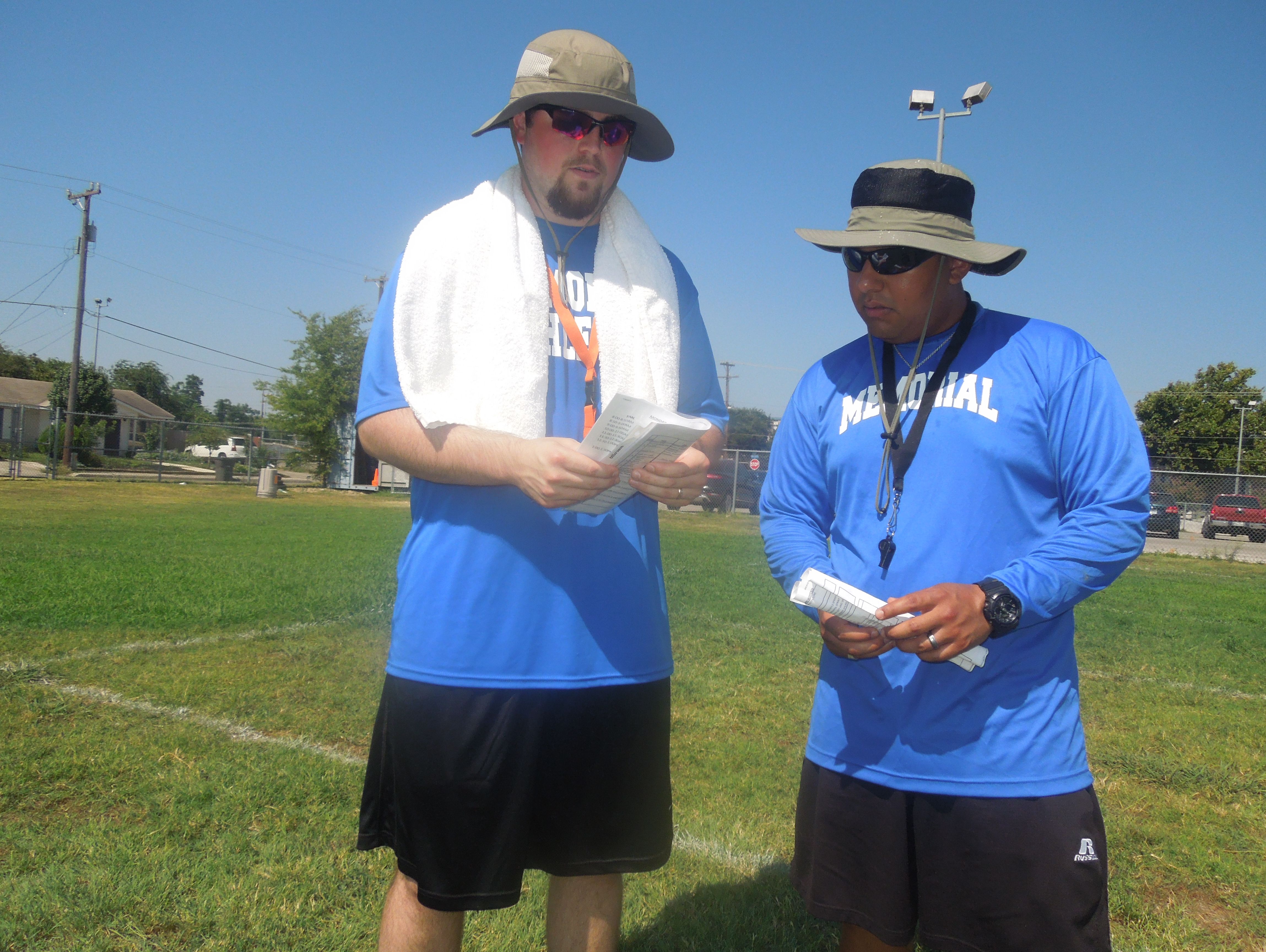 Former UTSA center Nate Leonard, left, was hired as offensive-line coach at Memorial High School in June after graduating in May.

Leonard looks different after dropping 55 pounds since the end of last season, and he’s a married man now, but the constant in his life since he was 9 years old remains unchanged.

“I love football and I really like the teaching aspect of coaching, because of what the teaching did for me and what coaches taught me,” said Leonard, who weighs 230 pounds now. “My coaches influenced me in such a positive manner, and letting me know that I could do whatever I wanted to do. They spent time with me and made sure they taught me well.

“That’s what I want to do with these kids. I want to show them that I believe in them, I love them and that they can achieve, and that they will achieve. That’s the biggest thing.”

How Leonard landed his first coaching job is an interesting story in itself. Mario Goff, principal at Henry B. Gonzalez Elementary, was so impressed with Leonard’s poise during a TV interview he watched that he invited him to speak to the school’s bow-tie club.

“In that interview, I noticed he was wearing a bow tie and he was talking about his bow-tie collection,” Goff said. “I’ve been wearing bow ties for about five years, so I made a personal connection. When I was assistant principal at Wren Elementary two years ago, I started a bow-tie club and then I started one at Henry B. Gonzalez.

“I needed a young man who could come in and motivate our boys, and be a role model and talk about what it means to wear a bow tie. He automatically came to mind. By chance, I was speaking to teachers at UTSA last year and asked if anyone knew Nate Leonard, to ask him to reach out to me. Within 48 hours, I had an email from him. That’s how it kind of took off.” 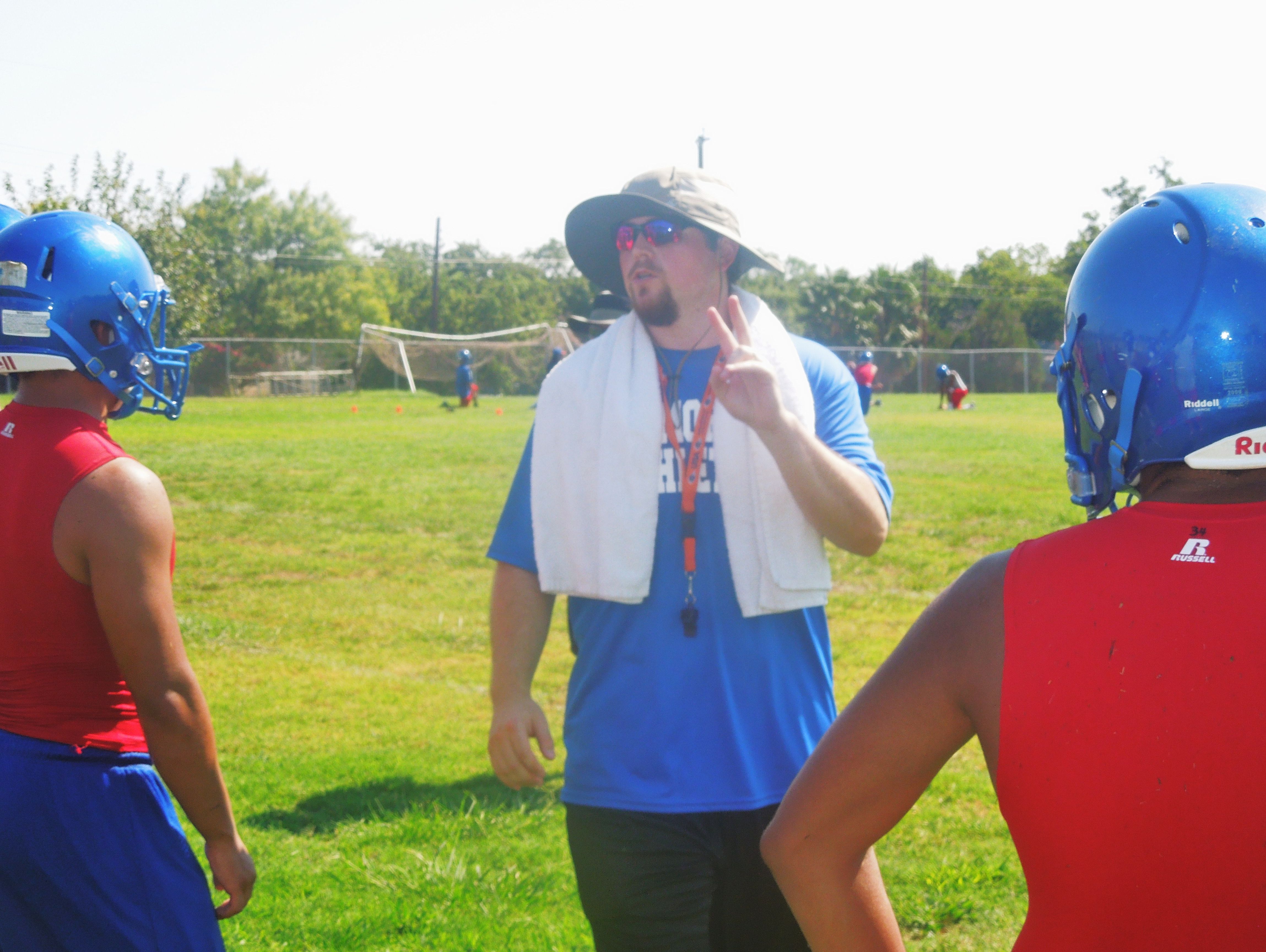 Nate Leonard, who graduated from McKinney High School in 2010, was a member of UTSA’s first signing class that February and became a four-year starter.

Not surprisingly, Leonard immediately connected with the 36 members of Gonzalez’s bow-tie club when he spoke to them one day during the football season last year.

“He made a very huge impact on those boys,” Goff said. “For the remainder of the school year, they talked about what Nate Leonard had spoken to them about – making eye contact, having a firm handshake, sitting up properly in your chair because your posture shows how confident you are in yourself.”

Goff was so taken by Leonard’s presence and passion that he passed his name along to Edgewood ISD athletic director Robert Gomez and Guerra. After Leonard graduated from UTSA in May, Goff received a resume from him via email.

“For some people, being a teacher comes natural and Nate has that natural ability to be an educator,” he said. “It all starts with his heart. He has a big heart and you know he’s going to be fully committed to whatever he does. That kind of commitment is not taught. It’s just a natural gift. If I were to fast-forward 15 years from now, I’d say Nate has a great future in coaching and education.”

Leonard will have to summon the perseverance he cultivated at UTSA to navigate his way through the challenges at Memorial, which went 0-10 last year and hasn’t had a winning season since 1994.

“Technique is the easiest thing to change, but attitude is the hardest thing to change,” Leonard said. “For these kids who are at a school that hasn’t been very successful, the thing we have to change is just because you wear ‘Memorial’ on your chest doesn’t mean you’re going to go out and lose. You have the opportunity to win if you buy into the program, all that stuff that (UTSA) Coach (Larry) Coker told us: ‘You’re younger than everybody else, but you have to buy in.’

“That’s what we’ve been stressing to these kids. You buy in and you’re going to change the mindset. We’re getting things going. We’ve got to worry about us, not the teams we’re playing. If our players see improvement, that’s motivation to keep coming back to practice, keep putting those pads on. And eventually, we’re going to sneak up on somebody.” 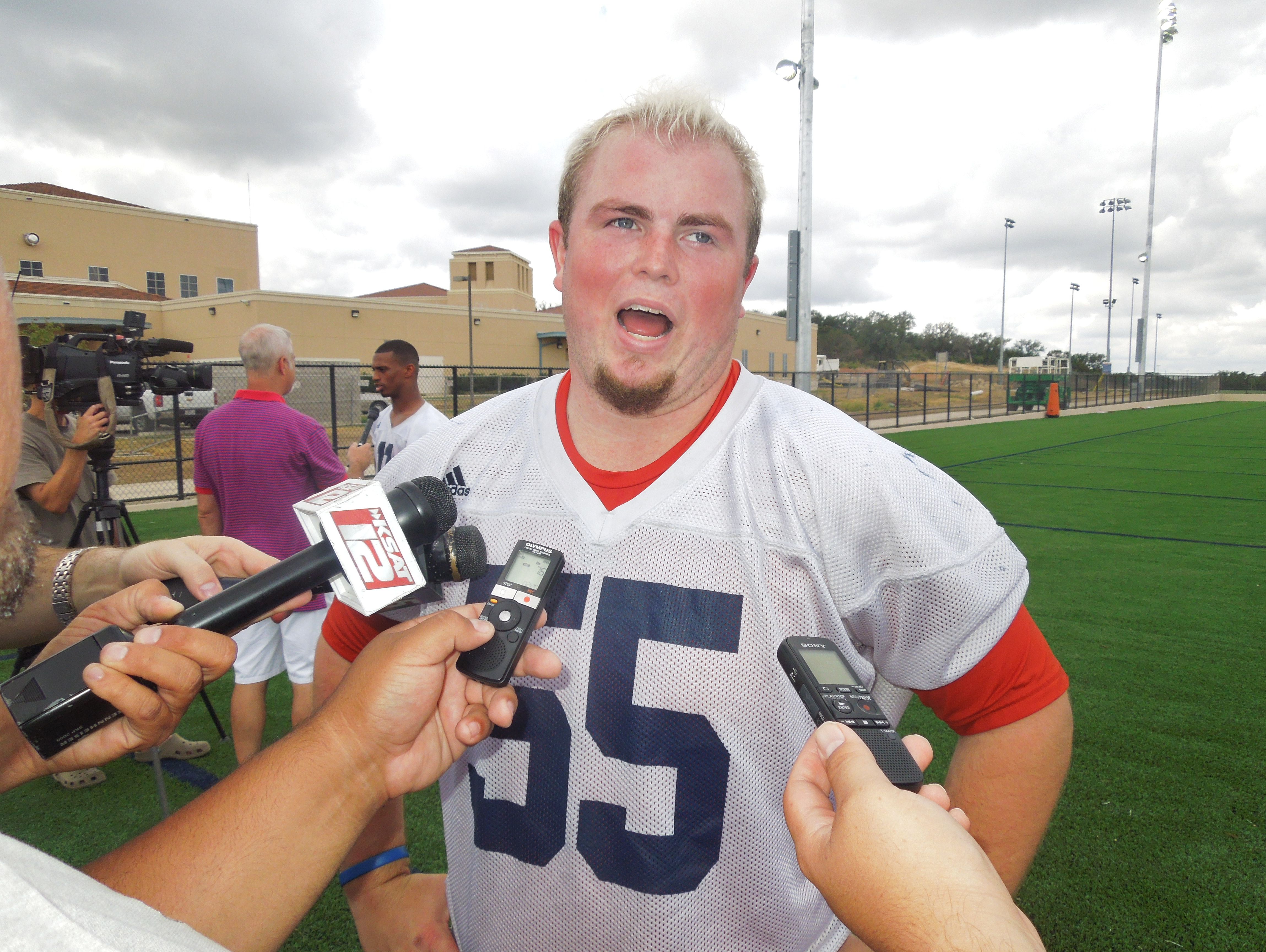 Former UTSA center Nate Leonard was one of the most colorful and engaging players on the team during his four-year career with the Roadrunners.

Leonard shares what he learned at UTSA, which went 23-23 in his four years on the team, to help motivate his players.

“I took from that whole experience that anybody can do anything, no matter what anyone says,” Leonard said. “That’s it. It’s as simple as that.”

Guerra, who is starting his fourth season at Memorial, spoke highly of Leonard.

“Obviously, he has an upside to him,” Guerra said. “He played four years at UTSA. More than anything, he has character. We talked a couple of times in the spring and I was impressed with his character and the things that he does.”

An only child whose father is an attorney, Leonard grew up in an environment markedly different than the community that surrounds Memorial. The Edgewood ISD has historically been one of the most economically disadvantaged districts in the state.

“It’s a challenge and that was something that was told to me many times coming into the district: You must be up for the challenge, you must be up for the challenge,” Leonard said. “Kids are kids. A pigskin is a pigskin. One hundred yards is 100 yards. When you step on the field, your background doesn’t matter. What house you live in, what car you drive. We can prove that this year.

“I feel it’s like a self-fulfilling prophecy. If you tell a kid, ‘You come from a poor district, you’re going to be bad at football,’ he’s going to automatically think he’s going to be bad at football. We’re trying to change that culture here at Memorial by really encouraging these kids to stick with it, because if they stick with it, they can be successful.”