As the NFL draft nears, USA TODAY High School Sports will look back at the high school careers and draft prospects for some of the top players. Here is today’s installment on Stanford offensive tackle Andrus Peat.

By the numbers: Started at left tackle in the final 27 games of his college career and also played in 13 games as a freshman, missing only one because of a hand injury.

Draft positives: Overwhelming size and power. Can explode out of his stance and dominate at the point of attack. Has a long reach with strong, heavy hands. Generates a lot of power from his lower half and can play the leverage game. Plays with a wide and balanced base. Holds his ground against the bull rush with ease, doesn’t get pushed back.

Draft negatives: Limited athlete the further into space he gets. Struggles to hang with the speed and quickness of linebackers on the second level. Will get top heavy when fatigued, bending at the waist and reaching.

What he says: “(Stanford does) a lot of the pro-style (offense) that I’m going to see in the NFL, so I think my coaches did a really good job of preparing me for that.” 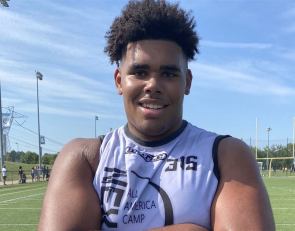 California School for the Deaf-Riverside falls short of state championship

https://usatodayhss.com/2015/from-high-school-to-the-nfl-andrus-peat
From high school to the NFL draft: Stanford tackle Andrus Peat
I found this story on USA TODAY High School Sports and wanted to share it with you: %link% For more high school stories, stats and videos, visit http://usatodayhss.com.