Frank Dixon has seen a lot of soccer in his 25 years as Carmel girls soccer coach. He led the Greyhounds to five consecutive state championships from 2000-04 and captured another title in 2011. After losing a heartbreaker to Fishers in the title game last year, this year’s Greyhounds look to be as strong as any team in the program’s history.

Carmel (14-0-2) has allowed one goal this season, a program record. The Greyhounds have scored 51 goals and are ranked No. 1 nationally according to MaxPreps. They have been No. 1 in the Indiana Soccer Coaches Association poll for four weeks.

Yet when Carmel takes the field vs. Westfield on Thursday night to open sectional play, numbers don’t matter.

“All of the sudden you’ve got the pressure of a knockout tournament,” Dixon said. “We’ll see how this group handles the pressure.”

“We put a lot of pressure on teams with our attack,” Dixon said. “There are a lot of good defensive teams, but it’s really hard to score. “

Even if opponents can keep Carmel off the scoreboard, it will be hard to get the ball past senior goalkeeper Celene Funke. She hasn’t allowed a goal since the first half of the season opener.

“We’ve had (keepers) play at Indiana, Marquette, Syracuse, Purdue,” Dixon said. “She might be the most athletic one.”

Although Carmel hopes to be playing at Carroll Stadium for a state title Oct. 31, Dixon knows anything can happen. Carmel had to win two overtime sectional games and one regional game on penalty kicks just to get to Carroll last year.

“Even when you should win or you feel you have the best team, in soccer the margins are really thin,” he said.

Fishers looks to three-peat in Sectional 16

The No. 7 Tigers (11-3-2) could be thinking about a rematch with Carmel and a chance at a second state title. But they can look no further than No. 4 Hamilton Southeastern in the sectional opener. The two teams played to a scoreless tie in September.

“Six weeks ago, I think our team would’ve been tempted to look ahead,” Fishers coach Ben Beasley said. “But now I think as of late we’ve really been focused on the moment, on ourselves, getting healthy and hopefully having a good opening game.”

While Fishers is the defending state champ, No. 3 Noblesville and No. 4 Hamilton Southeastern won’t go down quietly.

“I like my team when they’re playing like they’re capable of,” Noblesville coach Mike Bradley said. “Even though we’ve beaten these teams earlier, we know when we play them again we’re not going to carry a 1-0 result into those games. Those teams have grown since the last time we played them.”

After dropping two of their first three games to the No. 1 and No. 2 teams in the state, the Royals (11-3-3) went 13 games before dropping their last home game of the season to Noblesville. Hamilton Southeastern has allowed only nine goals.

“On any given day, Fishers, Noblesville and HSE over the last couple of years has been a game,” HSE coach Greg Davidson said. “I like the momentum we have and how we’ve jelled coming into the tournament. I think we’re going in as strong as we can.”

No. 5 Brebeuf Jesuit (13-2-1) has scored nearly six goals per game this season while allowing only 10 all year.

“I think our team is very well balanced,” coach Angela Berry White said. “Our forwards challenge our defenders every day in practice and vice versa. It makes a big difference when you have a well-balanced team and they can push each other in all areas of the field.”

Brebeuf will host the winner of Herron and Pike on Thursday night.

Hope Van Wagner leads the team with 13 goals and also has eight assists.

Goalkeeper Lexi Short has eight shutouts on the season.

The Orioles will face the winner of Mooresville and Brownsburg on Thursday night. 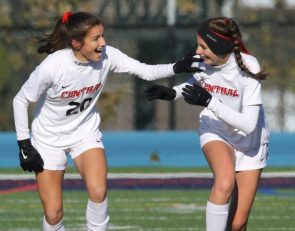 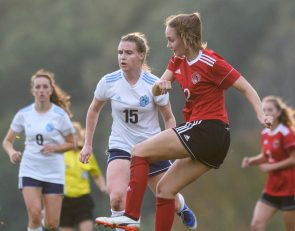 https://usatodayhss.com/2015/girls-soccer-tournament-carmel-has-eye-on-crown
Girls soccer tournament: Carmel has eye on crown
I found this story on USA TODAY High School Sports and wanted to share it with you: %link% For more high school stories, stats and videos, visit http://usatodayhss.com.