KUSA — The Grandview Wolves, Nicole Lyubenko, verbally committed to the University of Alabama girls soccer squad on Thursday over social media. Lyubenko, a midfielder on last year’s defending 5A state championship team, will be a junior on the Wolves 2015-16 team.

“Stepping onto the campus is just an amazing, indescribable feeling you really don’t get anywhere else,” said Lyubenko. “It just really made it hard to say no.”

Lyubenko was put in contact with the Alabama Head Coach, Wes Hart, through her club coach Danny Bills. “I took a trip to Tuscaloosa, AL with my dad and played in their ID camp, met the coaches, and got to know them,” said Lyubenko. “Hart’s coaching style was a lot like my club coaches as well as the other coaches and I liked that.”

The Roll Tide went 10-7-3 last season in the SEC, falling to Tennessee in the opening round of the SEC Tournament. The program has had two NCAA Tournament appearances in 1998 and 2011.

Lyubenko netted 12 goals — a team high — and dished 6 assists to teammates last season. She had 35 shots on goal in 18 games to help the team to an impressive 18-1-1 record, only tying Regis Jesuit and losing to Columbine 1-0 early in their season. After the loss, the Wolves went on a 16 game winning streak and beat girls soccer powerhouse Broomfield High School 2-0 to take home the hardware. 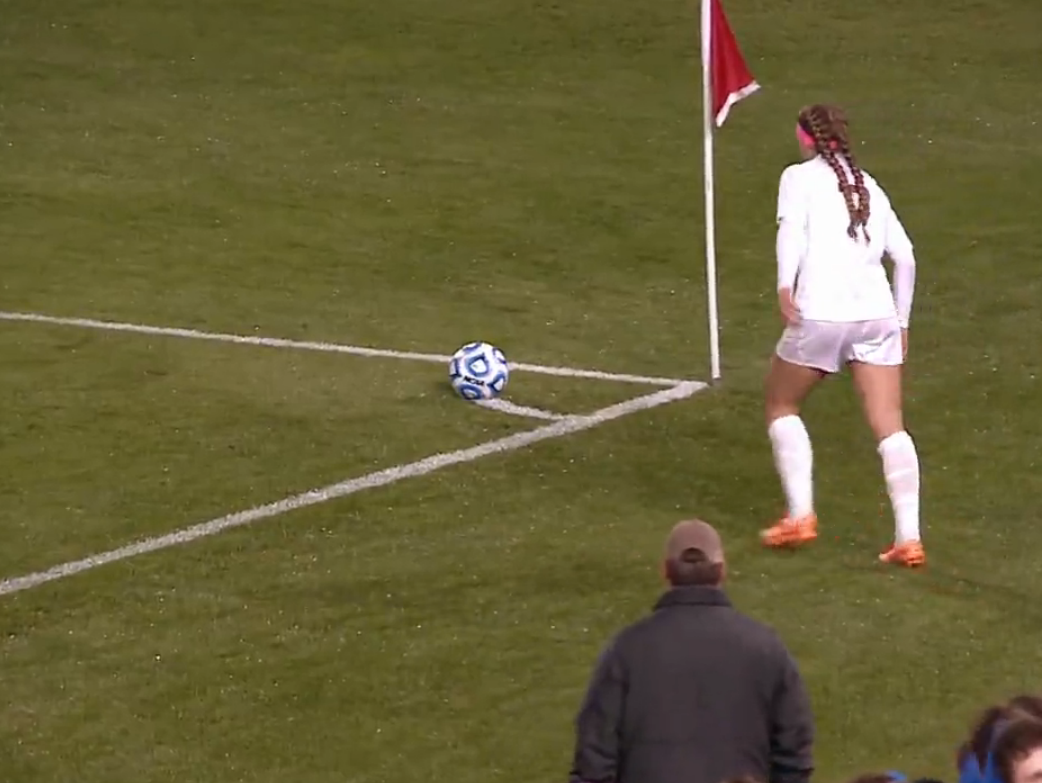 Lyubenko with corner kick in 5A state championship.

The soon-to-be junior (#7) had a great assist off a corner kick in the championship game and a couple good shots on goal. A young asset to the Wolves squad, Lyubenko is one of the five Division I verbal commitments on the team.

Grandview has had a slew of players that commit to Division I colleges from last years team. Mandi Duggan (University of Kansas), Bailey Cook (San Diego State) and Maddy Germann (Murray State) have all committed to Division I soccer schools from the Wolves; and Lyunbenko’s fellow junior-to-be Taylor Parker committed to the University of Denver Pioneers.

“We definitely have a target on our back’s this year,” said Lyubenko. “Overall, my hope is that this year we will stay humble and play the same as last season.” She told 9NEWS, “We really bonded among all of us and had a common goal; I’d really like to be a leader and help instill that in this year’s team.”

Watch out for the Wolves in the coming 2016 Spring season as they play to win back-to-back 5A titles with a bundle of Division I college commits.

https://usatodayhss.com/2015/grandview-girls-soccers-lyubenko-will-be-part-of-roll-tide-nation
Grandview girls soccer's Lyubenko, will be part of Roll Tide nation
I found this story on USA TODAY High School Sports and wanted to share it with you: %link% For more high school stories, stats and videos, visit http://usatodayhss.com.