Opportunity is knocking and Christ School is ready to answer.

This is the 100th overall season of football for the Greenies (10-2), but they have never won a state championship in Western North Carolina’s most popular sport.

Christ School travels to the Raleigh area on Friday to play Ravenscroft (9-3) for the NCISAA Division II championship.

“(A state championship) is obviously something that we have yet to obtain,” Greenies coach Mark Moroz said.

“We’re excited about the opportunity and we feel like we have a good gameplan in place. We’re up against a very good team. We’ve got our work cut out for us.”

Here is our capsule preview for Friday’s game at Ravenscoft:

Shall we put a cherry on top? What this centennial season of Christ School football could really use is a championship. Historically, the Greenies and Drew Johnson (2,454 yards and 24 touchdowns with seven interceptions) are 0-4 all-time in state-championship games. They made their last appearance in 2012 (a 54-38 loss to Davidson Day in Arden), also under coach Mark Moroz. Johnson set a single-game school record with 444 yards last Friday and most of this throws have gone in the direction of Kokayi Cobb (31 receptions for 376 yards and two touchdowns), Jared Letman-Gash (29 receptions for 850 yards and nine touchdowns), Tyler Redmond (28 receptions for 423 yards and seven touchdowns), Keyvaun Cobb (21 receptions for 283 yards and one touchdown) and Zach Ayotte (14 receptions for 220 yards and three touchdowns). Rushing-wise, Kokayi Cobb has added 790 yards and 10 touchdowns. Charlie Claffey is averaging a team-high 9.8 tackles per game, followed by Carson Jones (7.3), Tyler Redmond (7.0) and Landon Cooke (4.7). Five Christ School players have been selected to the NCISAA Division II all-state team – Claffey, Johnson, Letman-Gash, Kokayi Cobb and Scott Ullstein. Of that group, only Ullstein is a senior. The Greenies and Ravenscroft have one common opponent and the point spread should be a little disconcerting for anyone at Christ School. The Greenies rallied from 15 points down in the last 9:13 to nip Harrells Christian by one point last week. Ravenscroft drummed Harrells, 44-0, back on Oct. 30. The Ravens have a half-dozen all-state players of their own — Tyler Williams, Henry Atkinson, D.J. Washington, Colby Mudrow, Troy Jones and Sam Landis. 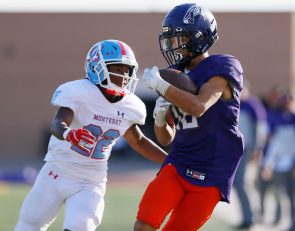 Opportunity is knocking and Christ School is ready to answer.