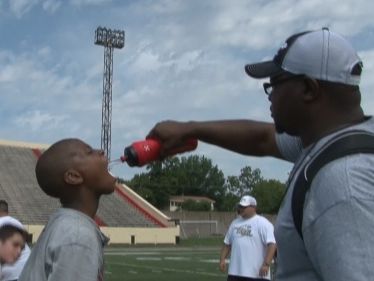 LITTLE ROCK, Ark. (KTHV) –We’ve reached a point where the waterboy or girl is now one of the most important functions on a team. In fact, it’s something a coach and the entire staff is responsible for.

The leading energy drink companies have driven a lot of the science working with the NFL, and that has trickled down to high school and youth levels.

Pulaski Academy’s state championship winning team worked out for two hours on Tuesday. No matter what level of football is going on, key elements have to be monitored when it gets this hot.

So how safe is it for our kids to be out playing when it’s 100 degrees?

“I don’t know how we even functioned back then.”

Actually Coach Kevin Kelley has a pretty good idea of how young athletes survived in the blistering heat of the American south 25 years ago.

He’s incorporated it into his state championship winning program at Pulaski Academy.

“The number one thing that stands out is we were acclimated. Kids were outside all day. They weren’t inside playing video games.”

And so at 2 p.m., members of the Bruins senior high squad were out lifting weights, and running over the scorching field turf.

Years ago, the waterboy was the butt of jokes. Today he’s a valuable member of the team.

“Having plenty of water. Having guys there to service that water. To make sure you’re never empty or out. You’re never in a situation where a guy could go down and you not have something you could give him.”

Those guidelines are spelled out in a tip sheet available to everybody through the Arkansas Activities Association.

Working within those guidelines and then mixing in his own off-beat philosophies is how Kelley believes his kids win championships.

“We get an ice company to come out here and we take ice baths every day after we are finished and that kind of helps the kids get reset back to zero. We got some tough suckers out here.”

Coach Kelley also says the kids probably bounce back a little better than we think. He says that during his recent 7-on-7 tournament, they had one player and one adult go down because of the heat. The child is doing great, but the adult is still in the hospital.