Hogs: Game balls all around after UTEP win

Hogs: Game balls all around after UTEP win

FAYETTEVILLE — Rout a team 48-13 and it’s hard for coaches to cite just one offensive, defensive and special teams player of the game. After rushing for 127 yards and a touchdown in Arkansas’ 48-13 win over UTEP, junior running back Alex Collins was one of three Razorbacks named Offensive Player of the Game by head coach Bret Bielema.

So Arkansas head coach Bret Bielema passed out a passel of honors Monday as the Razorbacks closed the book on their season-opening triumph over UTEP at Reynolds Razorback Stadium.

The focus now is on Saturday’s game with the Toledo Rockets at War Memorial Stadium in Little Rock. Kickoff is 3 p.m. on the SEC Network. This is the “second opener” for Toledo of the Mid-American Conference after its Week 1 date against Stony Brook was canceled Thursday night due to lightning.

Playing at their home field, the Glass Bowl, in northwestern Ohio, the Rockets led 16-7 at halftime when the game was officially called at 12:13 a.m. following more than three and a half hours in weather delays. The game was declared “no contest” and no statistics will be counted.

Against UTEP, senior quarterback Brandon Allen completed 14 of 18 passes for four touchdowns and a career-high 308 yards.

All three of those guys we really thought had pretty special days. Obviously, a lot of good things happened in front of them to make it happen.
Bret Bielema, on Offensive Player of the Game selections

Junior running back Alex Collins netted 127 yards and a touchdown on 12 carries.

So Bielema honored them all as Offensive Players of the Game.

“All three of those guys we really thought had pretty special days,” Bielema said. “Obviously, a lot of good things happened in front of them to make it happen.”

On defense, Bielema awarded co-honors to junior college transfer defensive end Jeremiah Ledbetter, debuting on the second team with eight tackles and one-half sack, and sophomore nickel back Henre Toliver. Toliver finished with four tackles, including two accounting for minus-7 yards. His interception to open the second half set up Collins’ 7-yard TD run.

Against Toledo, Ledbetter may start ahead of third-year sophomore Tevin Beanum at the rush end, Bielema said.

Defensive coordinator Robb Smith is “very excited about his (Ledbetter’s) production” but also maintains Beanum remains in the mix.

“Rush end has to be a productive spot for us,” Smith said. “I thought Tevin did a good job as well. We are fortunate that we have two guys there that can play at the quality level that we expect.”

For special teams, Bielema co-starred freshman placekicker Cole Hedlund, 2 for 2 on field goals and 6 for 6 on PATs, with sophomore kickoff man Lane Saling.

UTEP’s Autrey Golden has six career touchdown returns, but a 29-yard return was the best he could do with six Saling kickoffs.

Saling won the job in a kickoff last Thursday with incumbent Adam McFain.

“Lane embraced it, ran with it, kicked the ball very well on Thursday,” Bielema said. “I gave him the first kick and really never looked back.” Robinson was suspended for the entire UTEP game for disciplinary reasons that apparently began with academics last spring.

O’Grady and Johnson have been suspended from team activities since their arrests on alcohol-related charges during the last weekend of August.

O’Grady and Johnson already were set to redshirt, as is most of the 2015 class.

“Zach really came on during the last two weeks of fall camp,” Bielema said. “Rather than having our best right guard sub in (at center) during some mediocre reps at the end of a game, we’d rather bring Zach along and make him a little bit more prepared for if there was a situation we needed to use him this year.” Lightning delays that totaled more than three and a half hours canceled Toldeo’s season-opening game at its home field, the Glass Bowl, last week. Toledo led Stony Brook, 16-7, at halftime when the game was stopped.

Arkansas has an inside source on Toledo coach Matt Campbell and the Rockets.

“When you play a team like that a lot, you get to see how they’ve improved from year to year,” Enos said. “Coach Campbell and his staff do a really good job of developing those guys.” Campbell said he has plenty to step in, too, for suspended defensive end Allen Covington.

“I’ll be real honest, we’ve got great depth at both of those positions,” Campbell said on Monday’s MAC teleconference. “I don’t think it has much impact on our football team. Both are heavily rotated areas for us at tailback and the defensive line.” 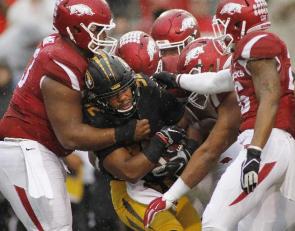 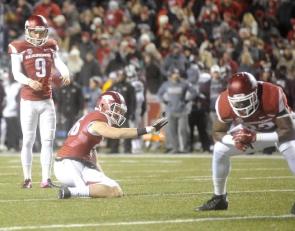 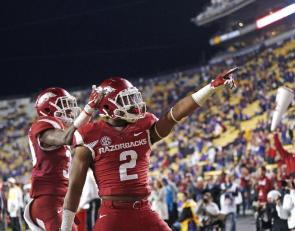 Razorbacks look for first win over MSU in four years

https://usatodayhss.com/2015/hogs-game-balls-all-around-after-utep-win
Hogs: Game balls all around after UTEP win
I found this story on USA TODAY High School Sports and wanted to share it with you: %link% For more high school stories, stats and videos, visit http://usatodayhss.com.