Arkansas’s Michael Bernal (3) is congratulated by Joe Serrano (10) after Bernal scored off a single by Tucker Pennell against Oral Roberts in the third inning of a game at the Stillwater Regional of the NCAA college baseball tournament in Stillwater, Okla., Friday, May 29, 2015. (AP Photo/Sue Ogrocki)

Arkansas’ Keaton McKinney (11) and Tyler Spoon (8) congratulate Michael Bernal, right, in the dugout after Bernal scored on a single by Tucker Pennell in the third inning of Friday’s regional game against Oral Roberts.

Mountain Home High grad Trey Killian got the start for Arkansas, but didn’t figure in the decision after giving up eight hits with three runs (all earned) and five strikeouts over five innings. The Hogs rallied past Oral Roberts, 8-6, to win their opening game at the Stillwater Regional on Friday.

STILLWATER, Okla. — Robert Wayman and Michael Donadio hit back-to-back RBI singles with two outs in the eighth inning to lift St. John’s to a 2-1 victory over host Oklahoma State on Sunday to stay alive in the Stillwater Regional.

Robert Wayman (3) of St. John’s slides safely into second base as Oklahoma State shortstop Donnie Walton (5) takes the throw during their regional game in Stillwater, Okla., on Sunday.

It was the third time in the past four games that Oklahoma State (38-20), the region’s top seed, squandered a lead in the eighth inning to lose.

The Cowboys, who have been eliminated, led Arkansas 4-2 on Saturday night before allowing five runs in the eighth en route to a 7-5 defeat. They also lost 6-3 to Texas last week in the Big 12 championship game after taking a 2-1 lead into the eighth.

Rick Nomura and Michael Bernal had RBI singles in a five-run eighth inning and Arkansas took advantage of Oklahoma State’s sloppy defense to beat the top-seeded Cowboys, 7-5, on Saturday night in the winners’ bracket final of the Stillwater Regional.

Arkansas’ Bobby Wernes (7) and Tucker Pennell (27) celebrate after Wernes scored on a hit by Tyler Spoon in the third inning against Oklahoma State during action at the Stillwater Regional on Saturday night. The Razorbacks rallied for a 7-5 win.

Second-seeded Arkansas (37-22), advances to its sixth consecutive NCAA Regional final, needs one more win to advance to a Super Regional for the fourth time in seven years. Oklahoma State (38-19) needs to win three games in two days to win the regional, starting with an elimination game at noon Sunday against St. John’s.

The winner of that game then meets the Razorbacks at 6 p.m. on ESPN3.

The Razorbacks entered the eighth trailing 4-2 but plated five runs in the frame to take the lead. Carson Shaddy pinch hit to lead off the inning and battled through a nine-pitch at bat to earn a walk. A single from Joe Serrano, a throwing error and wild pitch later and Arkansas had tied the game. When the damage was finally done, Arkansas had scored five runs on three hits, two walks, two errors, a stolen base and a wild pitch.

Serrano set the table from the leadoff position, reaching base four times. He had three base hits including his 11th double of the season.

Zach Jackson earned the save with two innings and just one unearned run. Five of the six outs he recorded were strikeouts.

The win marks the third come-from-behind victory in Arkansas’ past four NCAA Tournament wins. The Razorbacks also defeated Florida in this year’s SEC Tournament despite trailing in the ninth inning.

The Stillwater Regional winner will advance to the best-of-three Super Regional series against the winner of the Springfield Regional next weekend.

No. 8 national seed Missouri State finds itself in the same position as Arkansas, needing just one win to advance to the Super Regional round.

One more for a title: Bears beat Iowa in regional for 18th straight win

After rain allowed for only one game to be played Friday at Hammons Field – Iowa edging Oregon, 3-1 – Missouri State posted a pair of wins Saturday, blowing past Canisius 14-1 and then stopping Iowa 5-3.

With the win over Iowa on Saturday, Missouri State equaled the longest winning streak in the 52-year history of the program, claiming its 18th straight victory and a school record-tying 47th overall win in 2015.

• The Razorbacks are in the midst of their 28th NCAA Regional in program history, including the 14th straight

• The Razorbacks have advanced to their sixth straight NCAA Regional final 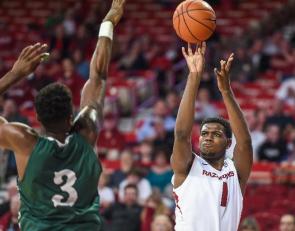 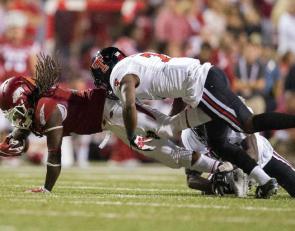 Long: Ahead of schedule 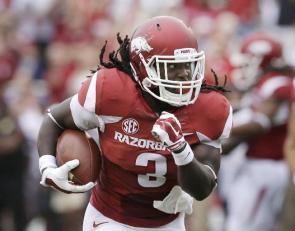 https://usatodayhss.com/2015/hogs-meet-st-johns-for-regional-title
Hogs meet St. John's for regional title
I found this story on USA TODAY High School Sports and wanted to share it with you: %link% For more high school stories, stats and videos, visit http://usatodayhss.com.