How Wrightsville, Ga., made Herschel Walker

How Wrightsville, Ga., made Herschel Walker 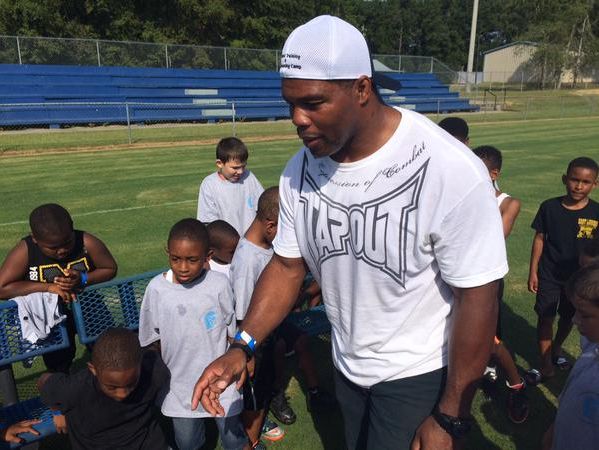 Herschel Walker leads a workout during his football and cheerleading camp at Johnson County High School in Wrightsville, Ga., on Saturday, July 11, 2015.

His high school coach, Gary Phillips, remembers how everybody knew it except for Herschel.

“He shunned the limelight, and you don’t see that very much anymore; the guy who gave credit to everybody who played with him,” Phillips said.

That love for his team, and all of Johnson County, brought Herschel back for a summer football camp 35 years after he graduated high school.

“There’s so many great people here,” Walker said. “They’ve shown me how to work. That’s what I tell kids all the time. Everything takes work. Whether you’re in the classroom or in the field, whatever you’re doing, you gotta work. Nothing is easy.”

Even now, at 53 years old, Herschel shuns the idea of age limits, and speed limits.

“If I can do it, why not do it? To show the young people let’s stop talking about excuses. Let’s put some hustle behind those muscles,” Walker said.

“I think he’s always going to be involved, all the way until they put him in a wheelchair somewhere,” Phillips said. “Then he might be into arm wrestling or something like that.”

He doesn’t lift weights, but Walker can still do some damage.

The people of Wrightsville taught Herschel to be Herschel, and he won’t stop working anytime soon.

https://usatodayhss.com/2015/how-wrightsville-ga-made-herschel-walker
How Wrightsville, Ga., made Herschel Walker
I found this story on USA TODAY High School Sports and wanted to share it with you: %link% For more high school stories, stats and videos, visit http://usatodayhss.com.