MIDDLE VILLAGE, N.Y. — It looked like a blowout in the first two minutes, and again multiple times in the second half, but by game’s end, it was a tussle. What was drawn up as the tightest first-round game at the DICK’S High School Nationals was exactly that, with perennial national power No. 6 Huntington  (W.Va.) Prep eventually eking out a narrow 73-70 win against Georgia’s social media darlings, Jaylen Brown-powered, No. 5 ranked Wheeler (Marietta).

It started with turnovers and a ferocious trapping defense by the Wildcats. Finally they broke through, taking the lead with less than 90 seconds remaining. Miles Bridges hit a pair to retake the lead for Huntington heading into the final minute, but Brown delivered again, scoring in the paint while drawing Bridges’ last foul of the game. Brown missed the free throw and foul was called on Wheeler.

That sent Karim Ezzeddine to the line for Huntington, who delivered on one of two to tie. Following a Brown miss while triple-guarded on a drive into the lane, Curtis Jones provided the breakthrough for Prep, scoring on a drive to the hoop and drawing a foul for a 71-68 advantage.

Wheeler’s Darius Perry was fouled just before he went up for a potential game-tying three with 3.1 seconds remaining, but was judged to be on the floor, leading to a double bonus foul, and just two free throws instead of three. He hit his free throws, but so did Thomas Bryant, as Huntington moved on to a potential second-round matchup with top-ranked Oak Hill Academy.

None of which is to underscore what Brown contributed. Playing just hours after jetting in from Chicago following the McDonald’s All American Game, Brown kept the Wildcats in the game multiple times. In the final 2:30 of the first half, with Huntington flexing its depth to pad its lead, Brown calmly stroked a three behind the arc in the one space where he was given just enough room to get off a shot. He finished the first half with 19 points, and the game with 29 points and 15 rebounds, remarkable considering his travel ordeal and a woeful third quarter which he attributed to a lost contact on the floor.

“I got about 2 hours of sleep,” Brown said after the loss. “I’ve only had to do that one time before, when I came back from Italy to the U-19 tryouts and didn’t have any sleep. It’s not easy to get used to.

“It’s upsetting to lose … but we went down swinging and I’m proud of my guys. Hopefully next year we can make a statement.”

That next year will be without Brown, who has yet to decide on a college destination with the spring signing period two weeks away.

As great as Brown was, the Irish of Huntington Prep had an All-American star who was even more dominant.

The center Bryant, who said he awoke at 3:30 in Chicago following the All American Game, proved surprisingly adept from deep, drilling a pair of threes after an earlier thunder dunk as part of a 13-point effort at the break.

He took control with force in the second half, scoring another 14 points and finishing with an overpowering 19 rebounds, not to mention four blocks. The bubble gum pink-shoed point guard Jones was equally important, setting the tempo while chipping in 23 points of his own, including the three that created separation at the end.

It was Bryant who helped set the stage early as Huntington got out to a 9-2 lead. The edge was as high as 13 points multiple times in the second half, but it didn’t matter as the Irish could never fully pull away.

That was a testament to Wheeler’s scrappy toughness and a frantic pressing defense which, in retrospect, the Wildcats should have employed earlier.

Yet, in the end the deficit was too large, Bryant was simply too big in every possible way and Huntington Prep coach Arkell Bruce’s charges were too clutch from the line to allow for a full comeback.

“Both teams played extremely hard,” Bruce said. “There was a great crowd and atmosphere. We could have executed a little bit better down the stretch. But their pressure as much as they did, we went to attack the basket. We go inside early and often. Every team we’ve played, we’ve pounded them inside. We think we have the advantage of any team in the country when we do that.”

That theory got one test on Thursday, and another is coming Friday. 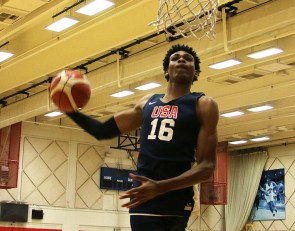 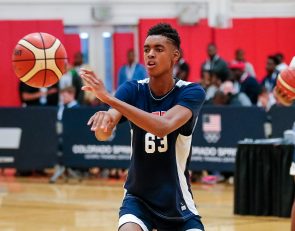 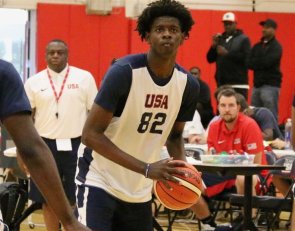 https://usatodayhss.com/2015/huntington-pulls-out-thriller-at-dicks-as-top-recruits-jaylen-brown-thomas-bryant-duel
Huntington pulls out thriller at DICK'S as top recruits Jaylen Brown, Thomas Bryant duel
I found this story on USA TODAY High School Sports and wanted to share it with you: %link% For more high school stories, stats and videos, visit http://usatodayhss.com.