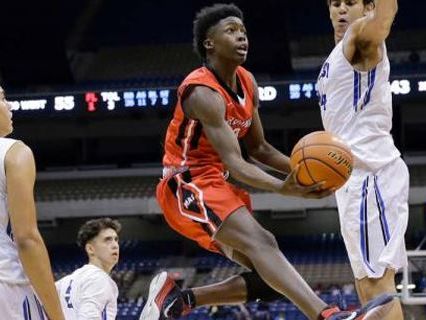 “Playing in GASO,” is all a player, coach or parent needs to say to convey they’re in the 27th Annual Great American Shootout, which has blossomed into a major stop on summer circuit which draws top players and high-profile national coaches just like Peach Jam (Atlanta) and Vegas (Las).

More than 4,000 players on 400-plus teams will descend on Greater North Texas for a tournament that’s a Basketball Jones’ delight, part talent showcase for proven and rising stars, part celebrity showcase. Among the 400 or so coaches in attendance will be Texas’ newly named Shaka Smart while national powers Kentucky and Arizona have been GASO regulars along with every Big 12 coach making a visible appearance sometime during the four days. always energetic SMU coach Larry Brown was one of the first coaches to show up registering last season at 8 a.m. on Day 1.

There’s a good chance Dallas Maverick in-waiting Deron Williams will show up in a gym with his Deron Williams Elite one of the state’s top youth programs along with teams sponsored by Dwight Howard, Chauncey Billups and T.J. Ford. D-Will’s team won the top division title in 2013 and he’s been a past tournament visitor.

The tournament showcases much of the nation’s top rising talent. Among the top national 2016 players will be 6-10 Jarrett Allen of Austin who has offers from Kansas, North Carolina and Texas. Among the nation’s hottest players is Irving MacArthur guard Andrew Jones, who just received offers from Texas, Arizona and Virginia.

Among the top Class of 2018 players (rising sophomores) are nationally noted Gerald Liddell of Cibolo Steele, Jaedon Lee of Houston Kinkaid and 6-7 power forward Reggie Chaney, who was a standout freshman at Frisco Liberty last season.For more 2017 and 2018 top prospects

The tournament starts Thursday morning and runs through Sunday afternoon with multiple age and competitive divisions. There are 10 venues (like Amazing Race TV show is a good trait for attendees) with most of the high school talent funneling through the Bob Knight Fieldhouse in Duncanville but including games at Cedar Hill, DeSoto, Duncanville, Arlington Martin and even including the newly named Advantage Sports Complex (formerly IAD in North Dallas).

Catching up on some hoops: Of the Class of 2016, the top commitment so far is 6-10 Harrison Henderson of South Grand Prairie to USC last month …. Henderson and SGP’s Cameron McGriff are expected to compete on the weekend … Alabama coach Avery Johnson could make his first GASO showing as the Crimson Tide’s new coach … Former Texas Titans coach Scott Pospichal is on Johnson’s fulltime staff …

July 13: Irving MacArthur rising senior Andrew Jones has the basketball legacy and talent to elevate among the highest college prospects. After an early season injury, Jones was a key factor in MacArthur’s run to the 2015 UIL state basketball tournament in March. His sister Alexis Jones was a McDonald’s All-American in 2012 after leading MacArthur to a state championship.

Over the weekend, Andrew Jones’ star continued to rise. At one of the country’s top youth basketball tournament’s, Atlanta’s Peach Jam, Jones added offers from Texas, Arizona and Virginia. He’s an athletic combo guard who has the athleticism at 6-4 to cover small forward as well.

After a knee injury following standout seasons at Duke, Alexis transferred to Baylor last year. Baylor men’s coach Scott Drew was one of the first major programs to offer Andrew Jones and now many have joined the parade.

The Jones’ story is one of the most inspirational with their father David Jones being paralyzed from the chest down several years ago in an auto accident while returning with his kids from a basketball tournament in West Texas. David Jones remains very active in coaching and supporting Alexis and Andrew.