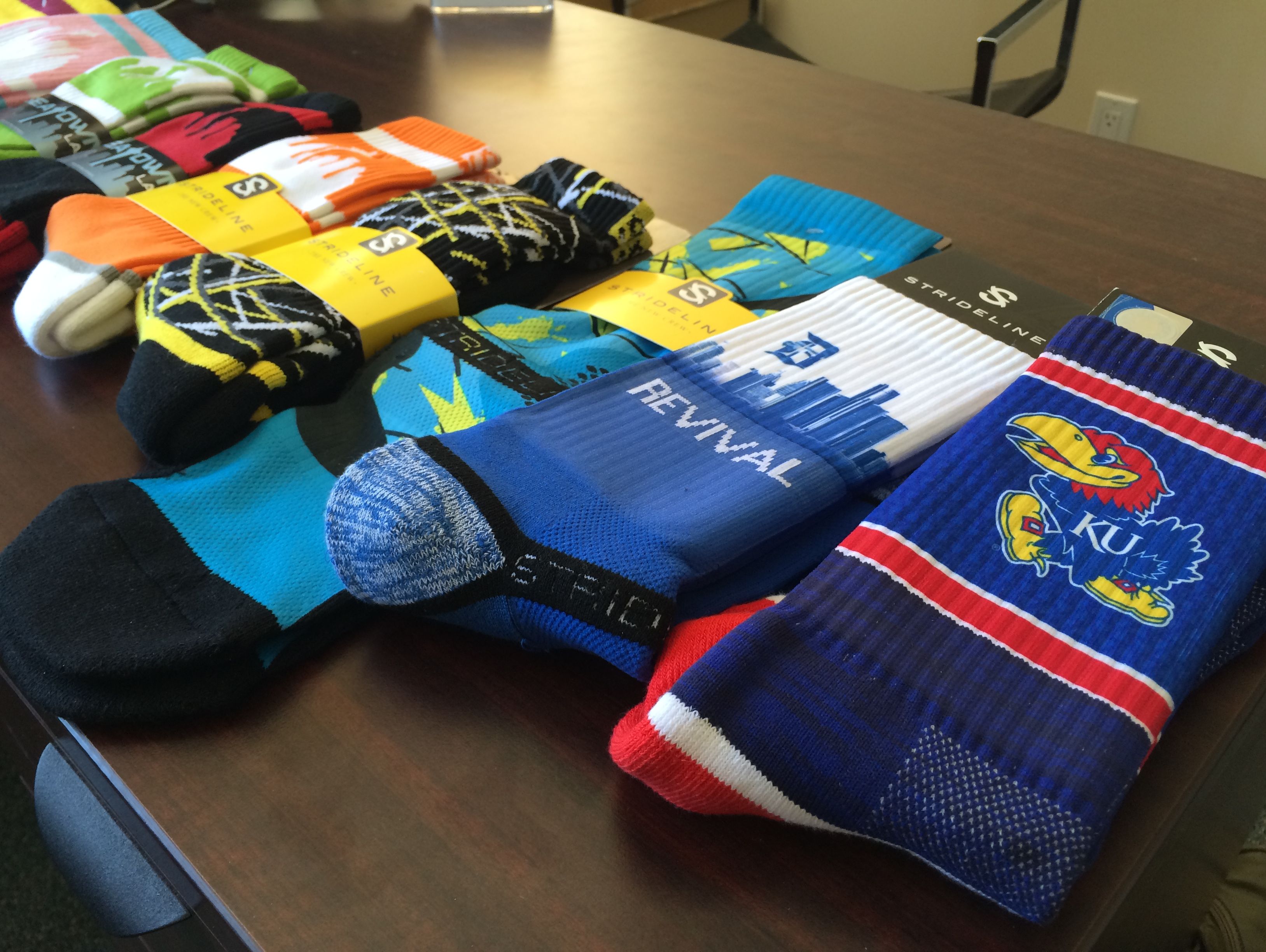 Srideline socks is expanding their line to include designs for 38 colleges in August.

It came from a disdain of plain white crew socks.

Riley Goodman and Jake Director were midfielders on the Issaquah lacrosse team in high school, and wanted to see more colorful crew socks on the athletic field.

“We saw that trend coming, and we thought that was a really good opportunity for us to jump on it,” Goodman said.

That thought, combined with a business mindset, drove Goodman and Director to found Strideline their senior year of high school.

After a high school lacrosse game, the duo locked themselves in Goodman’s Honda CR-V to brainstorm a company. Growing up they always wanted to start a business, and now they weren’t leaving the car until they had a concept.

Best friends since childhood, the two joke they are the same person. They were born in the same hospital six hours apart, both helped Issaquah win back-to-back state lacrosse titles, and both are extremely competitive.

“It does drive us forward a little bit,” said Director. “Because if Riley’s reading six business books a week, I think, I’m going to read seven.”

The two came up with vibrant crew socks that were cobalt blue with a white outline of the Seattle skyline. On the heel was the original company name: Seatown Lax.

The first shipment of socks Strideline ordered in 2009 sold out in three weeks.

Director showed a mock-up of the sock to his lacrosse coach Brandon Fortier and asked him what he thought of the thought of it.

“Jake came in with a crude picture he had done on [Microsoft] Paint,” Fortier said.

Googling for potential apparel manufacturers in the U.S. left them at a dead end, so the pair connected with a manufacturer in Istanbul. Director and Goodman pooled their graduation money – $700 each – and wired it through Western Union for a shipment of 1,000 socks.

After a debacle involving U.S. customs and a missing packing slip, the two were ready to sell their product. Over the summer Director and Goodman packed up their company car, a beat-up Buick gifted to them by Fortier, and headed off to high school sporting events to sell their socks.

Director and Goodman sold their socks for $6 at high school lacrosse and basketball tournaments – mainly to the middle and high school crowds. The first shipment was gone in three weeks. 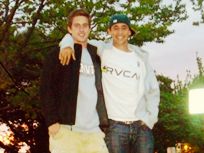 “Essentially we were our own customer,” Goodman said. “That’s a unique aspect of our company. That gives us an advantage.”

Although Strideline has expanded beyond the adolescent buyer, the company still has close ties with high school sports. Issaquah lacrosse and football programs wear Strideline, and the company has made custom socks for local schools, such as Skyline and Mount Si.

When Goodman and Director landed at UW in fall of 2009, the business kept growing. Their sophomore year, they borrowed $320 thousand to make a go at the business full-time. With extensive inventory, Director and Goodman were able to pitch their product to high-end retailers, such as Nordstrom and Macy’s.

Now, the company has ten full-time employees, has paid back all its debt, and has steadily doubled its business over time.

Strideline gained status with celebrities, such as Marshawn Lynch, Jamal Crawford, and Wiz Khalifia, who have all worn Strideline. The company just partnered with Nate Robinson to design a Nate’s Wings and Waffles sock. 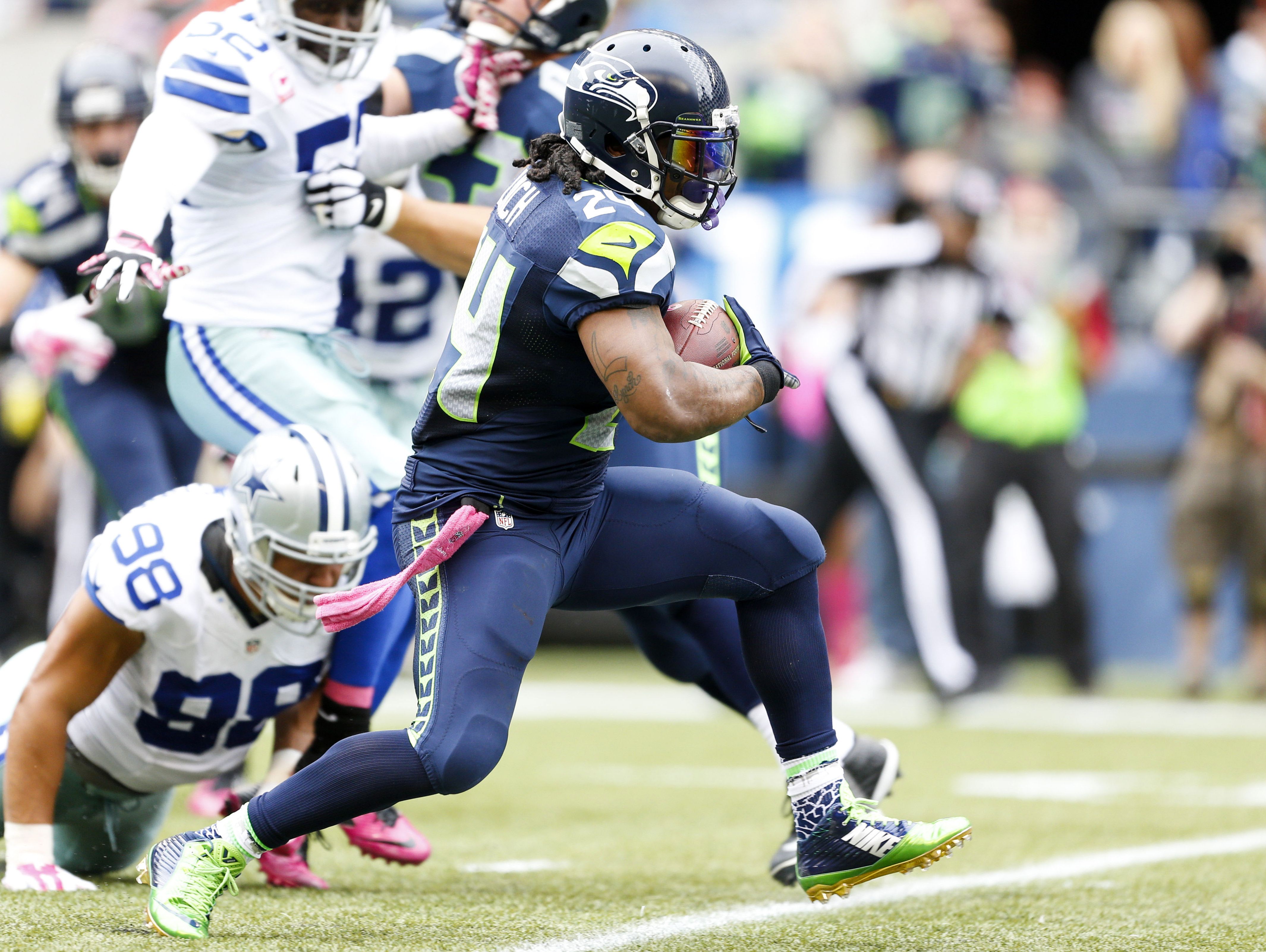 Seahawks running back Marshawn Lynch sports Strideline socks during a 2014 game against the Dallas Cowboys.

What’s next? In addition to the preexisting skyline designs for 28 cities, Strideline is launching a collegiate line in August, featuring 38 colleges. Strideline has also developed new patented technology with a manufacturer in the Philippines, which is used in patterned tube socks that come out next month.

“For a long time we have been selling socks that are more like fan wear and novelty socks,” Goodman said. “We sell a lot to athletes, but the sock itself is just a high quality sock. We are moving in the direction of making truly innovative athletic products.”

https://usatodayhss.com/2015/issaquah-hs-grads-make-it-big-with-strideline-socks
Issaquah H.S. grads make it big with Strideline socks
I found this story on USA TODAY High School Sports and wanted to share it with you: %link% For more high school stories, stats and videos, visit http://usatodayhss.com.