Ankeny Centennial’s Hunter Pinegar, shown here in a file photo, ran for a touchdown and caught another in a game against Council Bluffs Lincoln on Friday night.

The Ankeny Centennial football team will take a five-game winning streak into the Class 4-A playoffs.

The eighth-ranked Jaguars closed out the regular season on Friday with a 48-14 victory over visiting Council Bluffs Lincoln.

“We came out and we sustained drives, and we scored on our first four or five possessions,” said Centennial co-head coach Ryan Pezzetti. “We included a lot of guys on offense, and our defense played well. It was a good win, and it was a good way to cap off a district title and get the No. 1 seed for the playoffs.”

Centennial captured the Class 4-A District 3 crown with a 5-0 mark and improved to 7-2 overall. The Lynx finished the season with records of 0-5 and 1-8.

Three of Lincoln’s five losses in district play were decided by less than a touchdown, but Friday’s contest quickly turned into a rout. The Jaguars scored 21 points in the first quarter and built a 38-7 halftime lead.

“It was really a team effort,” Pezzetti said. “We had quite a few different people contribute.”

Quarterback Chance Gibbons ran for a pair of touchdowns and threw a 14-yard scoring pass to Hunter Pinegar. Pinegar also had a 20-yard touchdown run.

The Jaguars racked up 245 rushing yards. Dakotia Neer ran 10 times for 62 yards, including a 9-yard touchdown.

Ryan VanBaale added a 24-yard scoring run for Centennial, which also got field goals of 48 and 33 yards from John Banta.

“It was tough, but the seniors played hard,” Lincoln coach John Wolfe told the Council Bluffs Nonpareil. “I was concerned about folding up after last week, but they played hard. I was appreciative of their effort.”

Lincoln quarterback Josh Krabbe passed for 216 yards in the loss. He threw touchdown passes of 60 and 50 yards to Ross Nickerson and Devon Logan, respectively.

However, Krabbe completed just 12-of-29 attempts and was intercepted twice. The two teams combined for five turnovers and nearly 180 yards in penalties on the night.

Centennial will host Des Moines East (5-4) in the opening round of the playoffs on Wednesday. Kickoff is at 8 p.m., following a game between Ankeny and Indianola.

East earned its eighth trip to the playoffs in the last nine years with a 48-21 victory over Sioux City North on Friday. Brandon Trotter rushed for 185 yards and five touchdowns to lead the Scarlets.

“They’ve put up some points lately,” Pezzetti said. “We did get a chance to compete against them at a passing camp, and they do have some very good athletes. We know it’s going to be a tough game for us right out of the chute, but we’re looking forward to it.” 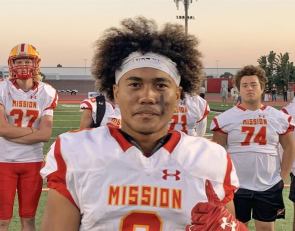 https://usatodayhss.com/2015/jaguars-romp-past-lynx-in-season-finale
Jaguars romp past Lynx in season finale
I found this story on USA TODAY High School Sports and wanted to share it with you: %link% For more high school stories, stats and videos, visit http://usatodayhss.com.